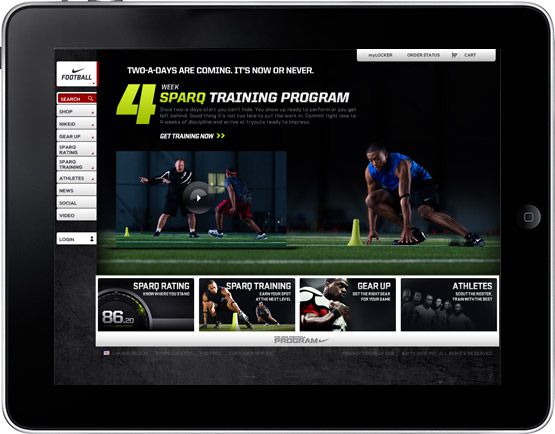 If the memo went out that mobile is the future, someone forgot to copy the world’s leading brands.

Digiday examined the websites of the top 50 global brands of 2011, as ranked by Interbrand, and found that 19 do not currently feature smartphone-optimized content. Those brands, which include Apple, Microsoft, GE, Nokia, Nintendo, Mercedes, BMW and Kelloggs, simply drive smartphone users to the desktop versions of their sites.

That’s a major whiff as more Internet use moves to phones and tablets. According to StatCounter, around 9 percent of all U.S. Internet traffic now originates from mobile devices.

The number of brands offering tablet-specific experiences, meanwhile, was even lower. Of the 50 brand websites examined, just two provided content tailored for the iPad. Those brands were Google and Nike.

Surprisingly, top electronics and technology companies were among the least prepared for mobile traffic. Apple, Nokia, and Microsoft, all of which sell or manufacture mobile devices or software, had neither smartphone- nor tablet-optimized sites. Despite the fact major auto manufacturers are often viewed as early adopters of the mobile channel, the sites of Mercedes and BMW were also lacking in both areas. Toyota, Honda, VW and Ford, meanwhile, all served up content tailored for smartphones, but not for the iPad.

Interestingly, Pepsi currently redirects both smartphone and tablet users to its Facebook page and appears to have no mobile content whatsoever hosted on its Pepsi.com domain. Though that approach might not be viewed as a “mobile-ready” one, the experience is at least tailored to users’ devices once they reach Facebook, owing to the social network’s support for a range of devices.

Many marketers argue a customized experience for the iPad isn’t necessary, since screen size and full-featured Safari browser are adept at rendering full desktop sites. But those experiences are primarily designed for use with a mouse and keyboard, and do not take into account the touch functionality of the iPad and other tablets. Nike’s iPad site, for example, features similar content to its desktop site but allows users to touch, swipe and interact with it in a much more intuitive way.

Meanwhile, Google’s investment in both mobile and tablet-specific experiences is perhaps unsurprising given its reliance on traffic and Web searches for revenue. As digital content consumption fragments across multiple channels, it’s essential for the company to cater to users regardless of which device they’re using.

But, ultimately, that logic could be applied to many major brands, including the ones listed here. While mobile users might not be a priority for more business-focused brands such as Thomson Reuters, Goldman Sachs and SAP, consumer brands such as L’Oreal, Gucci and Zara are likely missing out on sales and branding opportunities by neglecting to accommodate non-desktop devices.

*Smartphone and tablet Traffic to Pepsi.com is simply redirected to the brand’s Facebook page.

Methodology: Websites of the top 50 global brands, according to Interbrand’s 2011 rankings, were visited using Apple’s iPhone and iPad devices on February 22nd 2012. Top-level brand sites only were analyzed. For example, Microsoft.com was but MSN.com wasn’t, per the Interbrands list. iPhone and iPad devices were chosen as the most common smartphone and tablet devices currently found in the U.S.