Billboard is apologizing after one of its tweets involving Kim Kardashian’s daughter North West was widely interpreted as “vile” and “problematic.”

The magazine’s Twitter account, followed by 3.2 million people, posted a picture this morning of the 2-year-old in Kardashian’s arms licking a toy with the caption: “The apple doesn’t fall from the tree” with a link to a video of West shooing away the paparazzi. The tweet, seen in this screenshot below, was deleted after two hours after publication: 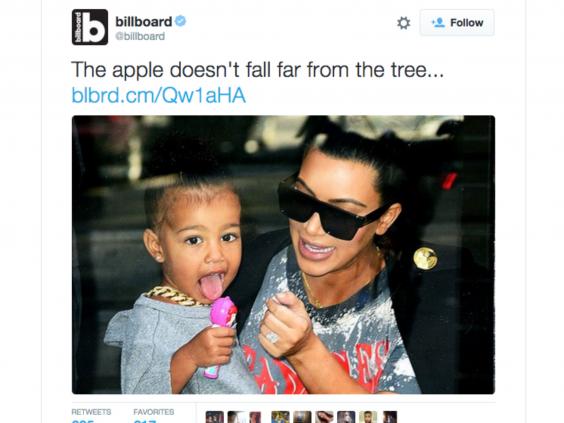 Many people blasted the tweet for its implied sexual innuendo, including MSNBC contributor Janet Mock who called it “appalling” and “shameful,” adding “an editor should never position such innuendo on the image of a child, regardless of her famous parent.”

Slut-shaming women isn’t okay. Slut-shaming baby girls is really not okay. I don’t care who their mothers are. https://t.co/aFk2RqNkiR

Delete this @billboard. This is absolutely disgusting. Garbage. https://t.co/8lBmqX7Tw4

.@billboard‘s tweet about north west is the most disgusting thing. someone needs to get fired. — carla (@indiosyncratic) October 30, 2015

Y’all trash for this RT @billboard: The apple doesn’t fall far from the tree… https://t.co/ngkPaDewWn https://t.co/kWWhgRLHch

Why not use an actual photo from the story that you’re posting about @billboard? Extremely problematic.

A Billboard press rep pointed us to this apology on Twitter without elaborating further:

We apologize for the tweet involving North West. The caption was about her comments to paparazzi. The suggestion some see was not intended. — billboard (@billboard) October 30, 2015

Still, many aren’t buying Billboard’s message even attacking the magazine’s editorial drift away from music news:

@billboard y’all are lying! If that was the case, you wouldn’t have used that picture. Yall are disgusting & thought it would’ve been funny!

@billboard well maybe if you stick to MUSIC related posts only, you wouldn’t have had that issue — Moriah Grant (@RiRi_Lova00) October 30, 2015

@billboard pls, y’all been doing dumb shit for 2 years , stay trying to get a few clicks