The departure of ESPN provocateur Bill Simmons is yet another cautionary tale for media companies trying to build publishing brands around big-name journalists.

Simmons said on Friday that he’s departing ESPN, where he’s been since 2001, for parts unknown. And while the immediate question was where he goes next — Turner, Fox and Yahoo are seen as possible landing spots — the equally pressing question is what his move means for Grantland, the sports and pop culture media darling Simmons launched back in 2011 under the ESPN umbrella. Simmons, whose name was synonymous with the Grantland brand, has put the site’s future in question.

“It doesn’t look good for Grantland,” said Ian Schafer, CEO of Deep Focus, who said that losing Simmons could make it harder for Grantland to continue attracting big-name writers. “Grantland, lightly ESPN-branded, is a distant priority to them, and probably a vanity thing to keep Bill Simmons affordable and on payroll. Now that they don’t have that burden, I question whether or not they will even want to keep it alive.”

ESPN’s investment in Grantland has been significant so far, however. Along with its stable of contributors, the site’s masthead tops 25 people, including two copy editors. ESPN has also given Grantland its own placement on the ESPN.com homepage, directly above Nate Silver’s FiveThirtyEight. Traffic to Grantland, while still tiny compared to the massive ESPN, has increased at a steady clip over the past few years. It got 6 million unique visitors in March, according to comScore, double its traffic from two years prior.

ESPN says that its dedication to Grantland won’t change. “ESPN remains committed to Grantland and we have a strong team in place,” ESPN president John Skipper said in a statement. 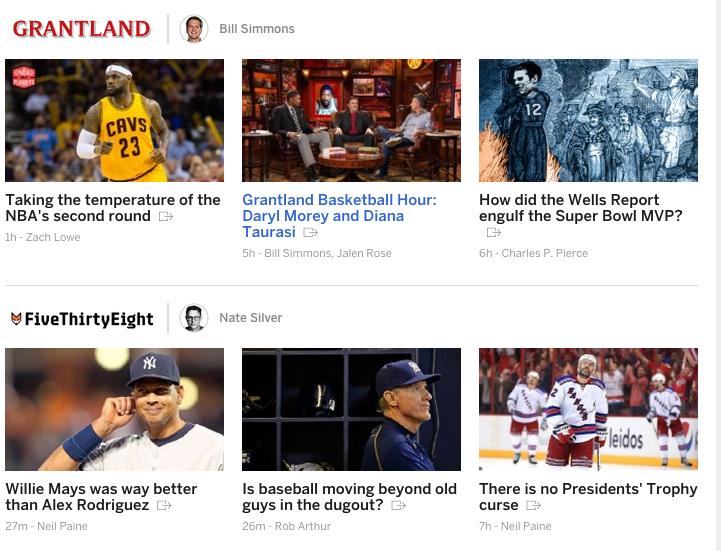 Others aren’t so sure that Simmons’ departure spells bad news for Grantland, which still has top-tier writers such as NBA reporter Zach Lowe and Pulitzer Prize-winning journalist Wesley Morris. Digitas media svp John Tuchtenhagen said that the Grantland brand is already so much larger than Simmons, whose output is only a small part of what Grantland puts out overall. “I struggle to remember the last time I read a Simmons piece outside of the NBA season,” he said.

Even Simmons himself would argue that Grantland will be fine without him at the helm. In 2009, he popularized “Ewing Theory,” which held that sports teams are often most likely to thrive after losing their best talent. “The site may actually benefit from losing its star player, so long as a sharp editor takes the reins,” said Jamie Mottram, head of content development at USA Today sports group.

“Simmons might have been a big talent but there are people around him at Grantland who have grown and become major voices in themselves,” added Jason Kint, CEO of Digital Content Next.

The challenge, of course, is retaining what’s left of the Grantland team. Hours after the Simmons news went live Re/Code reported that David Cho, Grantland’s publisher, was also stepping down.

Regardless the direction Grantland goes, the Simmons situation underscores the tension inherent in publishers’ efforts to build sites around the brands of individual reporters and personalities. The Web has tipped the balance of power in favor of writers, who are able to cut out the publisher middleman and speak directly to their readers. The likes of Kara Swisher, Andrew Sullivan and Nate Silver have all built massive personal followings independent of those that come with being attached to big media companies.

Simmons’ story is a similar one. A poster child for the small-time reporter that gets a mainstream break, Simmons attracted ESPN’s eye after he wrote an article in 1999 calling ESPN’s ESPY Awards a “TV Holocaust.” The resulting deal was mutually beneficial. ESPN got a well-respected, albeit controversial, personality, and Simmons got top billing on the world’s largest sports platform. The deal, however, eventually fell apart.

“There’s definitely an inherent risk in leaning on a single name, but it’s been a challenge for the media business for a hundred years,” said Bernard Gershon, president of Gershon Media. “Part of the business is building personalities and stars that can be center of attention. The risk is that often those stars leave.”

Gershon, however, is optimistic that the Grantland will live beyond Simmons. “They smartly called this thing ‘Grantland,’ not ‘The Bill Simmons Blog,’” he said.