Black Twitter is here to stay and the Los Angeles Times, finally, realizes that.

The newspaper announced today it’s the first news organization to hire a beat reporter to cover the influential Twitter collective that is largely ignored by the mainstream media. In a memo first obtained by Poynter, the hiring of freelance journalist Dexter Thomas to cover Black Twitter is part of a broader push to beef up its digital side.

Managing Editor S. Mitra Kalita said that covering Black Twitter is “so much more complicated than that.” She’s right. At any one moment, the vast online culture is dominating the social network by discussing the news or initiating topics that trend on a daily, if not hourly, basis.

Stereo Williams described Black Twitter on the Daily Beast as an “online culture of black intellectuals, trendsetters, and talking heads giving voice to many of the issues that 20 years ago would’ve remained far away from the mainstream media.” He points to the recent hashtag campaigns (#BringBackOurGirls) and protestors using Twitter following the deaths of Michael Brown and Trayvon Martin as how important it is to the black community.

In fact, research from Pew reveals that 40 percent of black 18-to-29 year olds are active on Twitter, compared to just 28 percent of white Twitter users in the same age bracket.

Black Twitter was especially palpable during last week’s BET Awards when a majority of the trending topics on Twitter during the telecast were created by Black Twitter users. Tweets circulating around focused on live-tweeting the show’s performances, shady memes and jokes. 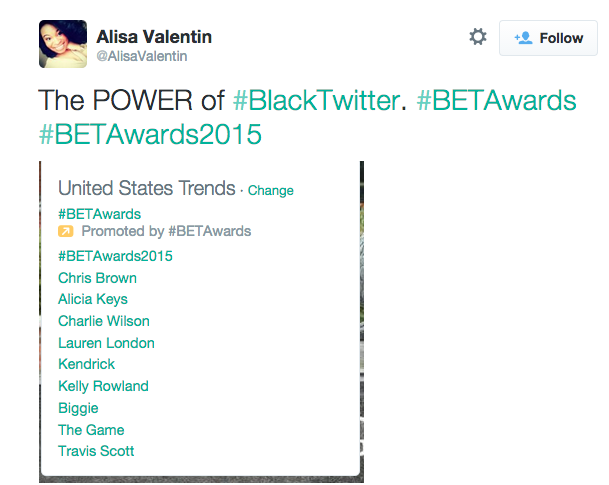 With Twitter struggling to find its purpose, black entrepreneur Tristan Walker says the platform “should pay attention” to its growing community of black members. The former Twitter intern told Bloomberg that it’s missing “an acknowledgment,” which perhaps is because of how few black employees Twitter has — just 49 of its 3,000 employees are black.

“I’ve never seen an explicit call-out to the influence of this demographic on the service,” he said. Twitter declined to comment to Bloomberg, yet said in a blog post last summer that “making diversity an important business issue for ourselves.”

Although Twitter realizes that problem, it’s the L.A. Times that is actually doing something about it.