Battle of the Social Brands: Starbucks vs. Dunkin’ Donuts 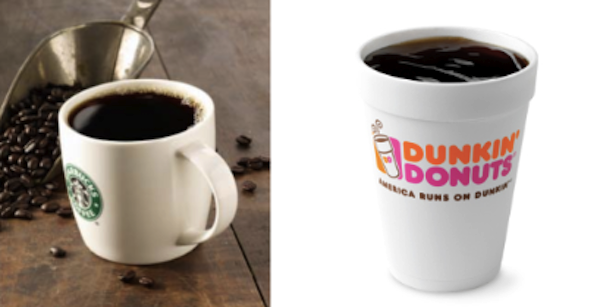 In this week’s installment of Battle of the Social Brands, we take a look at two of the brands most of us can’t live without: Starbucks and Dunkin’ Donuts.

Just a reminder: We examined the presence of each brand’s main Facebook, Twitter and YouTube account. Our analysis goes beyond raw numbers — anyone can buy a bunch of Facebook fans — to look at how well the brands employ those qualities inherent in the social universe: engagement and authenticity. We take a broad view of how these two companies are represented in the social sphere, looking at everything from how the brands set up its Facebook pages to the frequency and types of tweets the people manning the accounts deliver.

Are you ready for your social caffeine fix?

Starbucks:
The Raw Numbers:
Based on the numbers, it looks like many of us are just as addicted to Starbucks’ social networks as we are to their coffee. The Seattle-based coffee giant has 29 million likes on Facebook, with nearly 340,000 fans talking about the company. Additionally, 4.5 million of us have visited the brand’s page. On Twitter, the numbers are just as large: 2.2 million followers who have been on the receiving end of 10,000 tweets. Starbucks has uploaded 241 videos since it joined YouTube in November 2005. It has about 13,000 subscribers who have watched the videos 8.2 million times.

Behind the Numbers:
Starbucks has served up coffee since  its first shop in Seattle opened in 1971. Since then, it has become one of the world’s biggest brands. It has a market cap of $39 billion and has 6,700 stores around the world. When you visit its Facebook page, you’re greeted with the company’s Timeline and image of the brand’s beans. There are also quick links to other Starbucks Facebook pages, such as Photos, Maps, Events, Starbucks Card, Jobs, Videos and International. The Timeline stretches back to 1971 where we see a black and white image of the first store. You can follow the course of the company through the decades. Navigating through the Timeline is easy, and you can see other Facebook users’ posts onto the Starbucks page. There’s a healthy mix of positive and negative comments, but it tends to skew towards the positive. People really love their Starbucks coffee! Starbucks itself shares a mix of updates — only a couple per day — of images, videos and promotional messages, and it seems to engage with its users.

Like many other large brands, Starbucks has multiple tweeters (Brad and Lee) who tweet a lot. A good majority of their tweets are @ replies. Again, there’s a lot of engagement in this social stream. The few tweets that aren’t replies are typically links to other Starbucks social networks, like Instagram (where it has over 300,000 followers) or YouTube. The company’s Twitter background is of a white cup filled with coffee. Interestingly, the brand misses an opportunity to incorporate its famous ever-changing mermaid logo. Perhaps due to the outcry of last year’s logo change — the company eliminated the Starbucks name from the image — the company decided to keep the coffee cup clean on its Twitter page.

On the brand’s YouTube page, there’s a healthy mix of branded videos about customers and employees. As we know, videos are a great way to tell a story, and the coffee maker clearly understands the visual process. The videos also reinforce the company’s messages of neighborhood, responsibility and, of course, its beans.

Dunkin’ Donuts:
The Raw Numbers:
DD, as the brand calls itself on social networks, has a smaller following than Starbucks. There are nearly 6 million Facebook likes, with about 100,000 people talking about the company. The coffee/fast-food/doughnut chain is a heavy Twitter user, notching up 12,000 tweets with its 132,926 followers. DD has uploaded just 44 videos in the little more than six years it’s been on YouTube. It has 2,639 subscribers, and its videos have attracted 1.5 million views.

Behind the Numbers:
Based on the company’s social networks, America does not, in fact, run on Dunkin’. When you stop by its Facebook page, you’re greeted with a Dunk Zone graphic that lets you know you can get premium access to CBSSports.com during March Madness …”all for a few clicks.” So, basically, it’s an ad within an ad. The company has yet to set up its Timeline, which I’d be interested in seeing, since DD has gone through several owners since it was founded in 1950. The brand does pay homage to its users by having a Fan of the Week. There’s also a sidebar link to “Like A Boss,” where people can use the company’s video resume maker to apply for jobs. But you have to “like” the page before you can watch the video. Another sidebar link takes you to “DD and the Sims Social,” where you can play inside the Sims’ facebook app and, of course, visit a Dunkin’ Donuts. The page is updated three to four times a day with a mix of promotional updates and fan stuff. The fan updates, like every other brand on Facebook, have both laudatory and desultory updates.

The brand’s Twitter page is chock full of tweets to users. Unfortunately, many of those tweets start with: “Sorry to hear X,” followed by asking the first poster to follow so someone from DD can respond via direct message. The graphic the company chose to portray as its background reflects an interesting message. It introduces Dunkin’ K-Cup packs, a DD branded Keurig package. If you’re selling your own coffee blend, is partnering with another one a good idea? There appear to be at least four people behind the Twitter account, each signing initials for their tweets, which adds a good, personal touch, putting something approaching a face or name behind the account. Clearly, the company passes the engagement test on Twitter, but it also appears to use the platform as a customer-service tool. This tactic is fine some of the time, but the brand could benefit from building up its authenticity by sharing more information relevant to its followers.

DD’s videos on YouTube have a broad range. The brand has partnered with Marvel’s “Captain America” movie, and there a couple of interviews with Chris Evans, the star and a couple of co-branded videos with Agent M, Marvel’s editorial director, who went into a few Dunkin’ Donuts stores and filmed how doughnuts are made. Then there are the videos of a dude in a penguin suit. Clearly, there’s no cohesiveness to the brand’s YouTube page, and it seems as if they just threw these up. The company makes tons of commercials a year, and why they’re not up is beyond me. It has one of the most recognizable pitchmen ever, Fred the Baker, who should have his own page inside the company’s YouTube feed.

Conclusion:
Starbucks has successfully brought its brand message into the social sphere. DD has not. The former’s social networks appear to align with the company’s image, and it seems to understand there’s a give and take, which ultimately helps the company. DD seems to be on social networks because they have to. And that’s never a good reason to do anything.