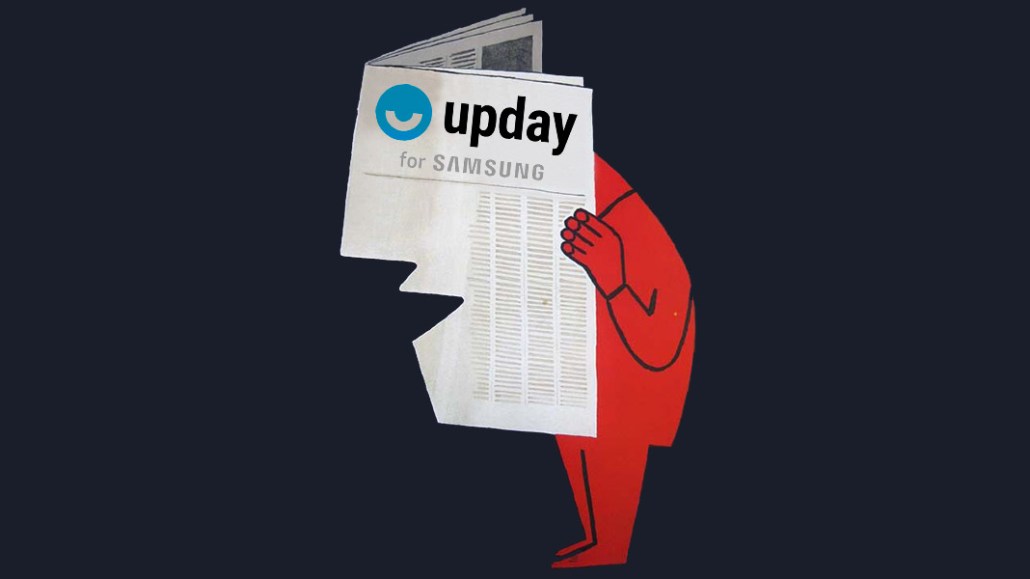 One key plank in Axel Springer’s resistance to the duopoly: Upday, an 18-month-old pan-European news app that comes installed on Samsung phones.

In total, Upday claims it has 13 million monthly users, up from 8.5 million in February, according to its internal analytics platform Localytics. In Germany, Upday’s figures are verified by third-party organizations such as IVW, the German Audit Bureau of Circulation, and research firm AGOF, the Arbeitsgemeinschaft Online Forschung.

This growth is partly because Upday is available in 16 European countries, where it now has eight editorial hubs, twice the number of hubs it launched with in March 2016. Upday has roughly 50 editorial staffers, double the amount in February, split across its eight European editorial hubs, who verify news and add a local editorial focus to the top global trending stories. Its Berlin headquarters employs around 25 developers and 25 sales and marketing workers.

The number of publishers it has worked with has nearly doubled to 3,500, too, according to the company. Collectively, Upday drives 4 million visits a day to its publishers, twice as many as it did in February; for some publishers, this amounts to between 5 and 20 percent of referral traffic, the company said. The Android-only app has also grown the number of handsets it’s available on from just the Samsung Galaxy S series to Samsung’s Galaxy A and lower-cost Galaxy J series.

“The unexpected figure was that retention rate and loyalty was high,” said Upday CEO Peter Würtenberger, adding that users are spending five minutes with the app per day. At launch, Upday claimed users spent two hours with the platform a month. This is respectable for a general news app, although not close to the 35 minutes per day users spend on both Facebook and YouTube, according to influencer agency Mediakix. Elsewhere, sports publisher Bleacher Report manages to get people to spend five minutes daily on its app, while women’s lifestyle publisher Bustle manages six minutes a day.

According to comScore, Apple News has 10.4 million unique monthly users in the U.K. (although it reported 70 million users via internal figures in November 2016). Upday has recently implemented comScore rankings, and its first full month of figures aren’t available yet, so it’s too early to accurately compare the Axel Springer platform directly to other news apps.

In the last four months, the platform has shifted focus from growing reach to increasing the time spent within the platform, achieving this by learning more about its users’ interests and tailoring content to them. When readers first use Upday, they are asked to select a number of topic categories. Now, a reader who chose to receive, say, lifestyle content on the platform is then asked whether she’s interested in topics like wellness or nutrition.

“On top of the explicit choice of categories, we have the implicit ways of understanding what the user is interested in through user behavior because the algorithm is learning,” said Würtenberger.

In the last two months, Upday has offered pan-European campaigns booked out of its local offices, which Würtenberger, who wouldn’t disclose revenue figures for Upday, said is a competitive advantage: Advertisers usually find local partners for each country. “Upday is small in comparison,” he said, “but it’s a great alternative as an active, European-wide platform for advertising, so it doesn’t all end up going to Google and Facebook.”

Spanish car manufacturer Seat recently ran a campaign in the U.K., France, Germany, Italy and Spain, booked through Upday’s office in Berlin, Germany. The centralized Berlin team tailored the creative to local markets and delivered it programmatically via mobile ad exchange Inneractive. Although, most of Upday’s other campaigns are delivered via independent ad tech firm AppNexus as part of the first implementation of Axel Springer’s global partnership announced in May.

The campaign, which included display and native formats in every 10 or so cards users swipe through, also drove above industry average on display ad click-through rates. The native ads, which included a number of articles like “5 ways the Seat Ibiza gets you moving,” performed the best, driving a 1 percent CTR, according to Upday. The company also said users spent one minute with the brand story — the landing page users clicked through from the native ad — 70 percent of users read 75 percent of the landing page brand story and 11 percent clicked on the call-to-action within it.

In the U.K., a campaign for Penguin Random House designed to encourage more reading among young children was targeted to parents. Two months ago, cross-country campaigns and these targeting capabilities were unavailable.

Upday campaigns typically run between a week and 10 days. So far, clients like Vodafone, Volkswagen and Seat have booked consecutive campaigns. The platform is popular with carmakers, with six out of the top 10 European car manufacturers booking campaigns, Würtenberger said.

“For me, the real value is having effective campaigns with good results,” he said. “It’s an effective way of combining central teams with local know-how.”

https://digiday.com/?p=252654
Most Read
Trending in Publishing in the Platform Era
Digiday Top Stories