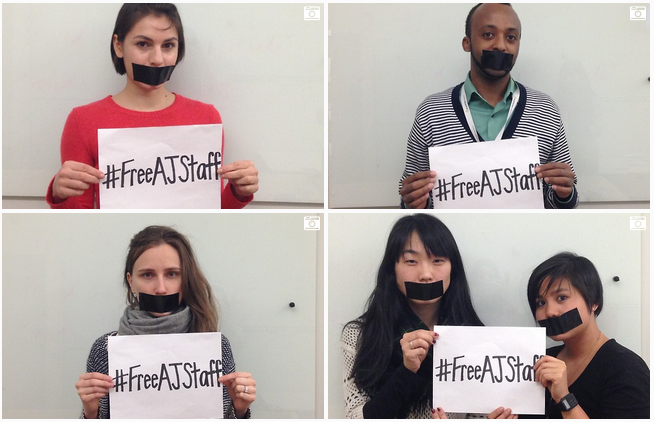 Al Jazeera has declared today a global day of action to show solidarity and support for journalists who have been detained or mistreated in Egypt.

The global Qatar-based news network is encouraging supporters to participate in the campaign by posting photos to Instagram or Twitter using #FreeAJStaff. Al Jazeera is also using the cause-based social media amplifier Thunderclap to boost the impact of the hashtag. Photos will appear on the #FreeAJStaff Tumblr page.

Egypt is ranked No. 158 out of 179 countries in the Reporters Without Borders Press Freedom Index. There are currently 175 imprisoned journalists around the world.

On December 29, three Al Jazeera journalists — Peter Greste, Mohammed Fahmy and Baher Mohemed — were taken from their hotel room in Egypt and arrested, accused of “airing false news” and misleading outside viewers about the situation in the country. They were also accused of backing the black-listed Muslim Brotherhood. They did not appear in court until last week, and even then their trial was adjourned until March 5.

A fourth journalist, Abdullah Al Shamy from Al Jazeera’s Arabic channel, has been detained for more than six months without charge. He has been on a hunger strike since January 23. 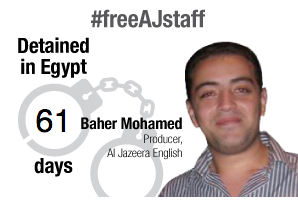 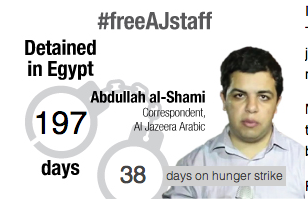 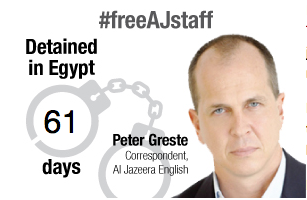 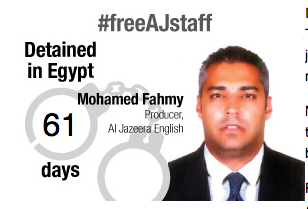 So far hundreds of journalists, activists and supporters have submitted photos. Journalists in 40 locations on every continent also staged vigils in solidarity with the detainees, to bring attention to the need for press freedom. The hashtag has been tweeted more than 87,000 times since the beginning of the month, according to Crimson Hexagon.

Journalism is not a crime. #FreeAJstaff – and all the other journalists imprisoned by Egypt’s regime. https://t.co/g14lB8oE7H

No news tweets today. Instead, awareness of an important campaign. I encourage you to join – https://t.co/bxqtYDb3TQ #FreeAJStaff

Journalism ↑ Thousands protest as their colleagues wait in an Egyptian jail for doing their job #FreeAJStaff https://t.co/gw7BbxEoCL #CWW

The White House, European Union and the United Nations have all called for the release of the journalists and for press freedoms to be upheld. All Al Jazeera staff gathered in the newsroom for a silent protest on Thursday.

The campaign has been effective in terms of getting the word out — the hashtag #FreeAJStaff has seen a massive surge of use as of this morning. With luck it will also be effective in freeing the detained: