Ad tech had a mixed year.

Venture capital for ad tech slowed down, while mergers and acquisitions rose. And as fake news became one of the hottest topics in the media industry, it became more apparent than ever that some ad tech companies profited from proliferating fake news while others banked on preventing ads from reaching fake-news sites. But within the diverse industry of ad tech, several companies stood out, for better or for worse.

Here are the biggest winners and losers in ad tech this year.

Purch
The tech network, which publishes Top Ten Reviews and Live Science, expanded its data science team in an effort to improve its commerce strategy. It has also been an early adopter of server-to-server connections, and developed a new reader-engagement score that is meant to replace the timeworn pageview.

“Purch is really one of the few media companies who are investing in proprietary ad tech, and they’re doing it right,” said Todd Garland, CEO of digital ad network BuySellAds.

The Trade Desk
The Trade Desk had the only ad tech IPO this year, and it had a major impact. A report from investment bank Luma Partners shows that were it not for The Trade Desk, ad tech stock prices (the orange line in the below graph) actually declined year-over-year.

But if The Trade Desk is included, ad tech stock rises. The report stated that the IPO was “a rare bright spot for public ad tech companies and perhaps a signal of more to come.” 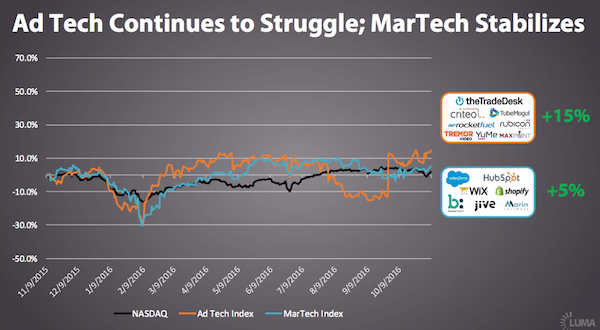 “The technology [investors in China] now have access to makes them winners, and it will be interesting to see what comes of them,” Garland said.

Losers
Content-recommendation engines
Outbrain, Taboola and Revcontent were thrust into the spotlight after the presidential election for their role in funding fake news.

As Franchi put it, “Despite being big businesses, these [recommendation vendors] are coming under tremendous pressure.”

Opera Software
Opera Software was poised for a big year, but its sale to a Chinese group was blocked due to regulatory and privacy concerns. Although the company was still able to sell off its browser business through a partial sale, the failure to sell the entire company contributed to a stock price drop. The company’s stock price still remains lower than it was in July, prior to the sale’s failure.

Rubicon Project
In January, Rubicon stock was trading for around $15 a share. By mid-December, the stock price had fallen to $7.90 a share. One of the company’s biggest snafus was its slow adoption of header bidding.

“It seemed like header bidding might be an incremental move [for publishers],” said Brian Andersen, a partner at Luma Partners. “But the Rubicon miss indicated [header bidding] is bigger than that.”

Yahoo
Earlier in the year, the main issue with Yahoo was that it was slated to be sold to Verizon for a fraction of what it was once worth. Dave McIninch, chief revenue officer of performance marketing platform Acquisio, noted that “the sale of Yahoo for parts to Verizon was not so much a disappointment as an inevitability.”

But in September, Yahoo disclosed that at least 500 million of its accounts were hacked. And then in December, Yahoo announced that it had another data breach that was twice as large as the one in September.

After the latest breach, Webroot analyst Tyler Moffitt told The Guardian, “No one should have faith in Yahoo at this point.”