Ad blocking has been a growing headache for publishers, and recent reports indicate that its reach will only increase around the world.

Although the growth of ad blocking overall in the U.S. is expected to slow down, researchers predict that ad blocking on mobile devices will continue to rise, particularly in Asia. Surveys also show that people in different countries tend to gravitate toward particular devices when they block ads, and ad blocking is pretty spread out across demographics. As Altimeter Group analyst Omar Akhtar put it, “Millennials are annoyed [by ads] and older users are creeped out by the specificity.”

Here are five charts that summarize the global state of ad blocking.

Worldwide ad blocking
Ad blocking used to be heavily confined to North America and Europe, but it continues to disperse throughout the world. According to PageFair, which makes money through selling anti-ad blocking services to publishers, the number of devices using an ad blocker increased by 30 percent in 2016, and much of that increase was concentrated in Asia-Pacific, where 16 percent of online users now have ad blockers.

Mobile on the rise
The rise of international ad blocking has coincided with a rise in mobile ad blocking. Sixty percent of ad blocking (308 million devices) occurs on mobile now. It is projected that mobile ad blocking will continue to make up a larger chunk of the overall ad block pie. According to Akhtar, mobile ads are more likely to prompt poor user experiences, which gives users more incentive to block them.

Mobile by country
Ad blocking is largely a desktop phenomenon in the U.S., where desktops were the primary way Americans accessed the internet when ad blocking started. Other countries such as China bypassed desktops and went straight to mobile once the internet became accessible there.

The U.S. is an outlier in its prevalence of desktop ad blocking. Among countries that have more than 30 million devices blocking ads, the U.S. is the only one that has more desktop than mobile ad blocking.

The U.S. slowdown
Ad blocking is still predicted to increase in America, but the growth will slow considerably, according to eMarketer.

Back in 2013, the number of users blocking ads was nearly doubling each year. This year, the growth rate is predicted to fall under 20 percent. But because only about 1 percent of U.S. mobile phones use a blocker, the U.S. isn’t tapped out yet.

“Looking at the disparity between desktop ad blocking in North America and mobile use, the potential for the growth on mobile is large,” said Richard Beck, ad platform product manager at Acquisio. 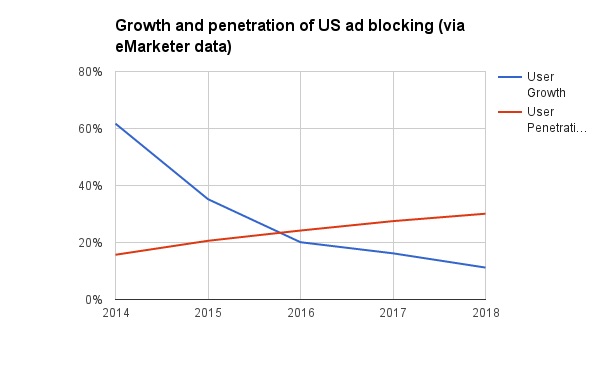 Ad blocking by demographics
Most people who know about ad blocking use it. And that type of technical awareness tends to be more common in young people. However, that doesn’t mean ad blocking is more heavily concentrated among the young.

Reports from PageFair and Trendera both found that ad blocking is pretty evenly practiced across gender and age cohorts. As Forrester analyst Susan Bidel wrote, “If you think that users of ad blockers are geeky teenage gamers, you’re wrong.”