5 things we learned about The Washington Post under Jeff Bezos 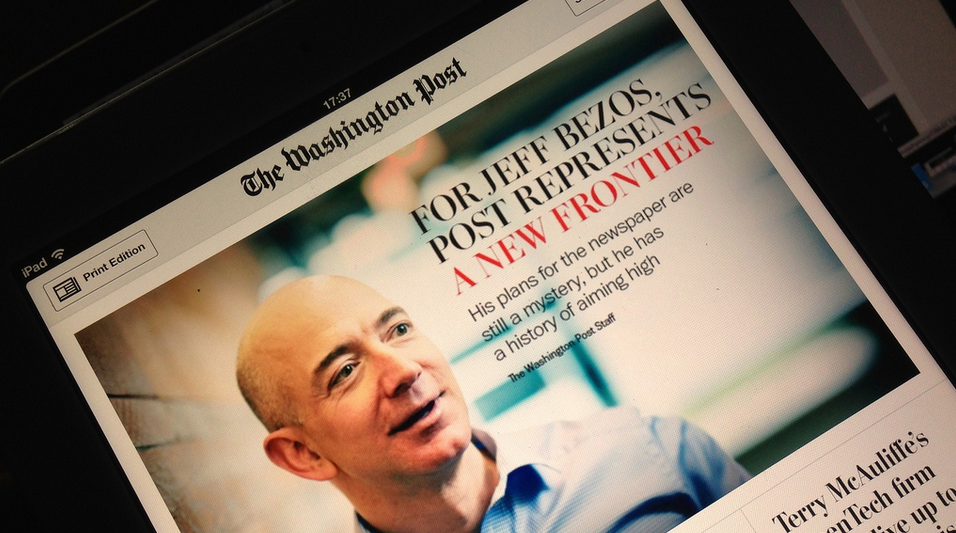 The Washington Post got a new lease on life last year when Amazon CEO Jeff Bezos scooped it up for $250 million. Since then the 137-year-old newspaper has put innovation at its core, rethinking its role in the media environment and taking some major cues from its new digitally savvy owner. Here’s what we learned this year.

It’s thinking beyond local.
Despite its massive global influence, The Washington Post has always positioned itself as a local newspaper. That changed in 2014. In March, the newspaper said that it would make its online content freely available to subscribers of local dailies such as the The Dallas Morning News and The Toledo Blade — all in the name of boosting the Post’s digital distribution. The effort has worked out well so far. The Minneapolis Star Tribune, for example, said in June that 7,000 of its subscribers signed up for the deal. On the international side, The Post also built a London-based sales and revenue team to develop its business across the pond. The Post already has a significant readership in Europe, where it gets 1.7 million monthly unique visitors, according to comScore.

Amazon’s influence is seeping in, for better or worse.
Jeff Bezos, beyond all the cash he’s giving The Post, is also offering the newspaper some of Amazon’s product and marketing expertise. The most significant example came in November, when Amazon said that owners of its Kindle Fire tablet would get a free six-month subscription to the Washington Post via an exclusive Amazon Fire app.

Slightly more controversial was The Washington Post’s integration with Amazon’s buy-it-now buttons, which it used to push people to, in one example, an Amazon product page for “Charlie and the Chocolate Factory.” The Post quickly removed the link but not before observers questioned whether the newspaper’s new ownership would compromise some of its editorial independence.

It’s expanding its sponsored-content output.
Native advertising is the next big revenue stream for publishers, and the Washington Post is no exception. WP BrandConnect, the newspaper’s content studio, upped both the quantity and quality of its sponsored content this year, writing articles for a wide variety of brands, including Mattress Warehouse, CIT and Emirates. It has even brought some of that output to print, with an October native ad for Shell. “The idea here is to start the conversation where Washington decision-makers start their day and continue the conversation with our readers online,” former chief revenue officer Kevin Gentzel said.

It’s experimenting with new blogs.
The Washington Post’s innovation streak has also extended to its editorial side, where it has pushed out a variety of new blogs. Storyline, for example, covers big stories while grounding them in data and research, while Morning Mix aggregates other publishers’ content. PostEverything, launched in May, is essentially an online opinion section.

“I’m very much focused on continuing the innovation that’s started with these interesting blogs and other products and trying to look ahead at what the needs are and how can we meet the expectations of the news consumer,” Washington Post publisher Fred Ryan said in September.

Events are becoming a big focus.
Today’s media environment is forcing publishers to think beyond display advertising to stay afloat. One alternative is the events business, another area where The Washington Post expanded its footprint this year. In September, the newspaper launched America Answers, a national events series that showcases ways that people are solving some of America’s biggest problems. In May, the post also brought its Washington Post Live video series to Boston, where it covered how baby boomers are using digital technology today.