British publishers love Facebook. And it’s easy to see why: The top U.K. news publishers enjoyed multiple millions of Facebook interactions in January alone, according to NewsWhip’s latest report. Usual suspects like Mail Online, the Mirror and the BBC led the pack. But not all romances have happy endings. Some big name newspapers failed to register on the top 25 altogether, having been usurped by viral publishers and regional news titles.

Landing a spot on the list may appear trivial in the overall scheme of things: It’s ultimately cash that counts. But with some publishers seeing over 65 percent of their traffic coming from Facebook, according to Bloomberg Media CEO Justin Smith, Facebook is a stronger barometer for financial success than ever. A look at the best of the best: 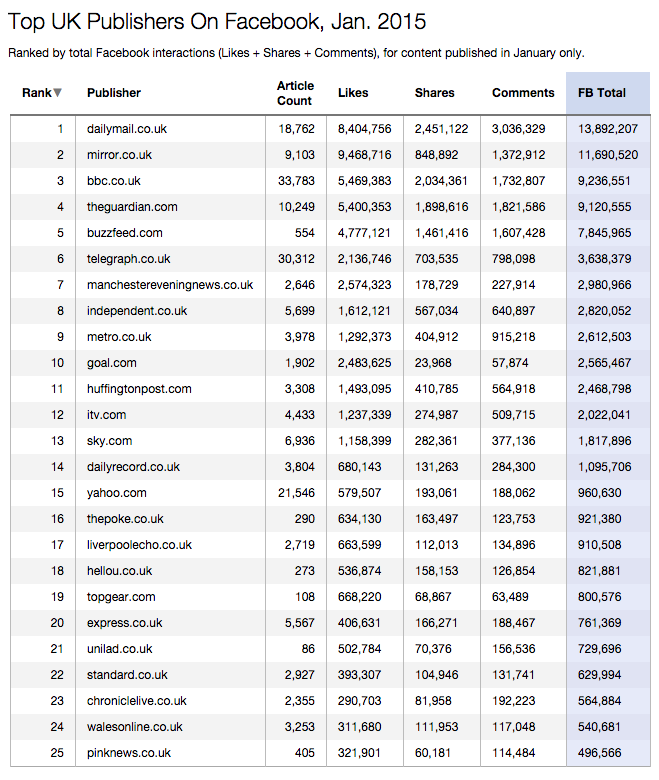 Digiday spoke to five of the top 10 publishers on the list to learn what tactics they’ve employed in their trip to the top:

Trinity Mirror
Six of Trinity Mirror’s titles made the top 25 list, with its national news site Mirror.co.uk coming in second place behind Mail Online. It credits some of its success to the way it has engineered its sites for mobile. It has, for example, reworked its social-sharing buttons to remain visible as readers thumb down the page. It believes that once it has fully cracked mobile, it will be well on the road to cracking social too.

Mirror.co.uk has a social media team of three, but it’s trying not to act as a bottleneck for social media. To get the rest of the organization to buy into social, it has appointed social media advocates within each of its teams to champion the use of social at the planning stage of various projects. The Mirror is also investing in Facebook’s promoted page ads to grow its number of likes. Its new pets Facebook page (watch out BuzzFeed) will be given a budget for Facebook promotion. It is not planning to pay to promote stories, however.

“As a news organization, I think there’s a risk to your reputation if you’re ‘sponsoring’ sensitive news stories to get more traffic. People might take that the wrong way,” said Heather Bowen, Mirror Online’s social media editor.

BBC News
The BBC News core social media team of five spends a lot of time analyzing data. They deconstruct all the variables that go into a Facebook post — from links to photos, videos, question marks and word length — to establish what works for its audience. The patterns of behavior from its sports audience, for example, showed that shorter Facebook posts worked best there.

“It’s important to be in a position to listen to your data,” said Chris Hamilton, head of social media at BBC News. “We try and really get under the bonnet of Facebook by looking at its data in Excel and combining it with other data sets and analytics packages.”

The BBC is also creating video content with Facebook in mind, like its one-minute news roundups and explainers. These videos use text titles to convey the point of the story even without audio playing: an idea adapted for Facebook’s mute autoplay video feature.

The Independent
For a while now, The Independent has tailored story selection, along with the tone and style of its content, to Facebook audiences. For example, its i100 news site, a newer product, covers news with social media in mind. “It’s 2015 and emoticons are apparently admissible in court :),” reads one headline.

“A lot of people focus only on things like tags in code, posting hours, geo-targeting and filters, cross pollinating and A/B testing. And of course, those are things we also think about a huge amount. But I can’t stress the importance of having the right content and tone in the first place,” said The Independent’s digital editor, Christian Broughton.

“Not all brands appear to be at ease with themselves now that we have this much closer relationship with our audience on social platforms. You need to be confident in what you stand for and have a deep understanding of what your audience wants in order to succeed.”

Goal.com by Perform Group
Facebook accounts for roughly 15 percent of Perform Group’s traffic in the U.K. It has employed three particularly interesting tactics to get into this top 10: Its employees share tips with each other on how to use Facebook effectively. It’s investing heavily in data visualization to create shareable infographics for Facebook. And it’s spending money on Facebook in a couple of different ways.

Perform sets aside a small budget for its marketing team to promote a story when it appears to be getting a lot of interest. It also buys ads to encourage users to download its football apps. Each of these tactics are tweaked and optimized through the use of A/B testing. For example, it found that targeting lower-league clubs’ fans and using their club’s players in the image led to a big increase in app installs. Targeting fans of big clubs worked less well in comparison, something Perform says is probably because fans have become accustomed to seeing their team popping up in their timeline.

The Telegraph
The Telegraph’s Facebook presence has grown from 800,000 to more than 2 million in the space of five months. But like The Independent, it attributes a lot of that success to cultural changes.

Rather than have its social media team purely manage its accounts, for example, the company recently decided to recruit journalists to do the job. Richard Moynihan, the Telegraph’s social media editor and leader of the team of seven, said, “If we’re the eyes and ears of social, we often know the back story around an event. We can then respond quickly and write it in a way that’s in tune with the environment the story came out of.”

But it’s not all managed centrally. To get its tone right for specific news items, some of the pages are managed by individual news desks with a social media manager to help push posts out. For instance, its sports and business desk manages their own Facebook pages. “We see social as a vital part of our business, so we’re determined for it not to become siloed within the organization,” he said.

Another part of its strategy is to encourage face-to-face communication when journalists pitch their stories to the social media team, which in turn posts them to the main Telegraph accounts. “The clearer we are about why a journalist is passionate about a story, the better we’ll translate that passion across to our social media followers,” he added.