As a digital media property that’s been around for a decade, Bleacher Report knows better than most that what worked on social media a year ago may well be old hat today.

With its new $100 million influx of funding from parent Turner Broadcasting, the sports brand is planning to hire as many as 20 platform content creators. The goal is to have a 35-person social content team that’s focused on creating original material that’s tied to live sporting events for distribution on platforms like Facebook, Instagram, Vine and Snapchat.

Posting sports highlights is easy to do, and Bleacher Report certainly does its share of that. But “they have an expiration date,” Bleacher Report president Rory Brown said. With the social team, increasingly, the focus is: “How can we create a moment people will still be talking about 12 to 24 hours later.”

Like all publishers, Bleacher Report is wrestling with how to adapt to the platforms era. It is not, however, spending much time hand-wringing over a loss of control. The mandate is: build as large of a reach as possible on platforms, worry about making money later. Speaking on the Digiday Podcast earlier this month, Brown said publishers who don’t embrace platform distribution will end up “in trouble.”

The need for original content becomes all the more urgent for publishers as people are increasingly likely to come across their content in a blur of their social feeds, disconnected from the publisher’s own site. Brown believes this demands a more sophisticated approach to content. That’s why Bleacher Report is looking to create what Brown calls a “writer’s room mentality,” stocked with people who are already expert in making original content for specific social platforms. The team, now 15 people, watches games and brainstorms ideas that would play well on social. 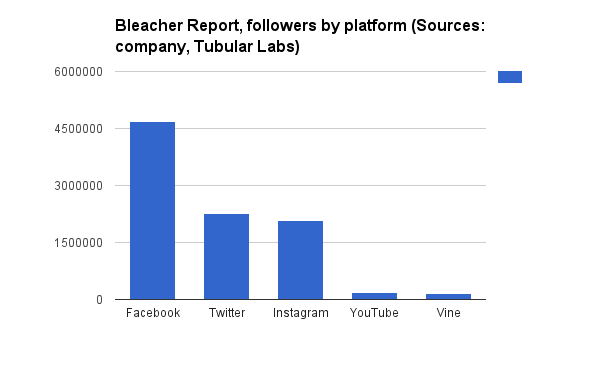 March Madness has been fertile ground for such creativity. In one case, a Northern Iowa player made an incredible, half-court game-winning shot. Anticipating people would be talking about the shot well into the next day, Bleacher Report turned around a video highlight that incorporated the ’90s movie “Angels in the Outfield.” “People love nostalgia,” Brown said.

Northern Iowa had angels on their side last night! 🙌🏻

This March Madness Vine, meanwhile, which got 410 revines, compared a Miami player’s stopping in his tracks with a video game controller being disconnected (a joke that wouldn’t be lost on Bleacher Report’s young male gaming audience).

For a sports publisher, being part of the real-time conversation is important. But since big news moments like that don’t happen every day, the team also works on coming up with original content to feed fans in between live events, like “Game of Zones,” an animated short that spoofed the HBO hit “Game of Thrones” using NBA figures.

Bleacher Report’s aggressive stance toward social distribution shows; it consistently dominates other sports media outlets on Facebook and is growing steadily on Instagram as well as being notably huge on Vine, said Brandon Silverman, co-founder and CEO of CrowdTangle, a social media measurement firm. “They’ve driven over 35 million interactions this year alone which is more than any other sports media outlet on Facebook,” he said. “They also regularly compete in broader categories as well, including occasionally outperforming folks like the Huffington Post, CNN, the BBC, the ‘Today’ show and BuzzFeed’s main account.”

Original content is expensive to do, and other publishers have legitimate concerns about putting their material exclusively on others’ platforms without clear paths to monetization. Brown said he’s more concerned about building Bleacher Report’s brand for now. On the plus side, he knows advertisers want to be associated with live sports moments and thinks the ability to line up advertisers around Bleacher Report’s original content isn’t far off.