Big brand pullouts will have had limited impact on YouTube

Theater is an effective way to garner headlines, but it’s not always reliable when it comes to siphoning money from platforms.

After the Times of London published an exposé about YouTube ads appearing against racist videos, brands began to pull their ads from the Google-owned platform in a move to gain any kind of possible leverage against the ad giant. But this kabuki theater is really more about power and money than moral outrage, which was demonstrated last week when advertisers suddenly demanded discounts from Google, even though ads have run next to extreme content on YouTube for years.

Brands and publishers want to get power back from powerful platforms, but at least so far, the damage appears negligible, according to ad tracking data.

Forecasts on the impact of the pullouts have been mixed. RBC Capital Markets hasn’t changed its revenue forecasts for Google. Nomura Instinet estimated there could be a $750 million fallout. Pivotal Research analyst Brian Wieser said brand pullouts could potentially cost Google about $1 billion in annual revenue, but he was upfront in noting that “it’s all guess work” and that “in the short term, it’s not a given there will be any direct negative impact.”

Pathmatics does not offer a forecast, but it estimates how spend has already changed. Even if spend were to decline among top advertisers like the headlines shout, that doesn’t mean it would necessarily have a significant impact on YouTube since the convoluted digital advertising supply chain is designed to draw upon a vast pool of buyers, which limits the impact of brand “boycotts.” Overall ad spend on YouTube appears pretty stable according to the data, which runs through March 30. 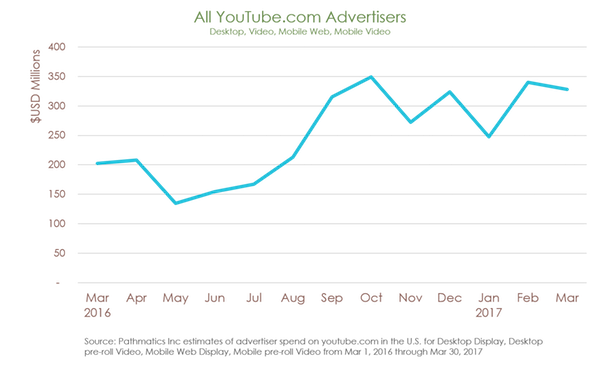 As seen in the chart below, spend for the top 200 advertisers on YouTube has declined throughout March, which would back the advertiser-knuckling headlines. However, a sample of just 200 will usually produce short-term volatility. And because some of the biggest advertising on YouTube centers on TV and movie launches, spend from the top buyers is fairly cyclical, Roberts said.

Spend from top advertisers at the end of March may be down from February levels, but it is still above January levels, for example. Google declined interview requests, but a spokesperson sent over a statement: “We’ve begun an extensive review of our advertising policies and have made a public commitment to put in place changes that give brands more control over where their ads appear.” 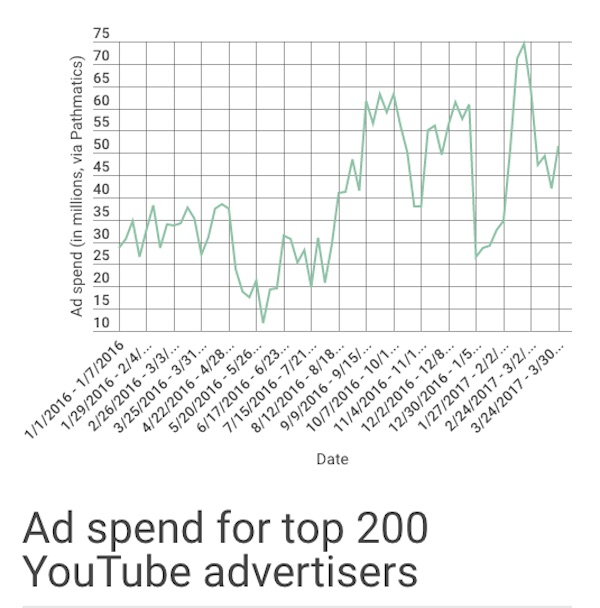 It’s worth noting that Pathmatics data has limits. This particular dataset is limited to the U.S., and it doesn’t have access to plug into apps at scale and track ads there. It also can’t detect whether a takeover ad was part of a special deal.

“The absolute values have a lot of caveats,” Roberts said. “It is the trends that are more relevant.”

An ad buyer requesting anonymity said that any large-scale impact on YouTube could take time since Google inventory has a tier of commitment levels and YouTube inventory is near the top of that tier. AdWords campaigns can be altered within a few minutes. But YouTube deals are more likely to be upfront commitments, so it can be a while before buyers are in a position to totally pull out. Wieser cited this delay when he said that overall YouTube spend could still be affected by pullouts even if there hasn’t been damage yet. But it is also possible that the furor will subside before more advertisers have a chance to put their money where their mouth is.