WSJ vs. Bloomberg: A tale of two marketing campaigns 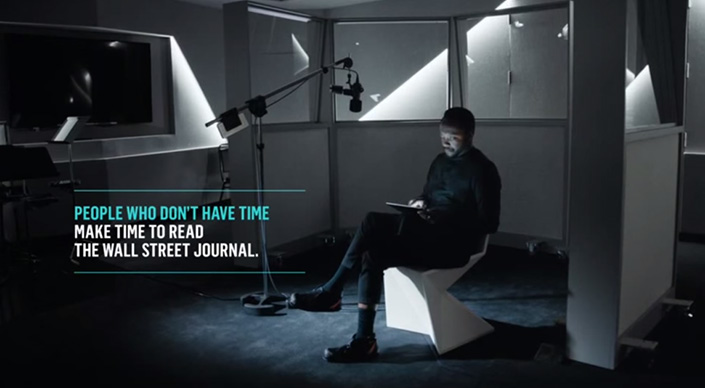 The Wall Street Journal has tapped will.i.am and Tory Burch to help sell itself. A new consumer-focused ad campaign positions the paper as the publication for ambitious and successful readers who may not have time to do much — but make the time to read the Journal. The campaign, created by The&Partnership agency, will also feature Mike McCue, CEO of Flipboard and Zhang Xin, CEO of SOHO China.

Meanwhile, it has only been a week since rival business publication Bloomberg, on the heels of a flashy redesign, launched a consumer-focused campaign that sought to appeal to a new kind of businessperson. The WSJ said the campaign is “not a response” to Bloomberg’s campaign, and has been in the works for a while. Bloomberg’s campaign tagline is “Business is,” and is aimed at what the publication called “the leaders of the new economy.”

The campaigns are a response from two esteemed, old-school publications to the growing threat from business-upstarts like Quartz and Business Insider, which have seen good growth and a growing consumer base in the last few months. Quartz, for example, said it hit 10.9 million unique visitors in October, a record for the company, and had quadrupled ad revenues since it launched in 2012. There’s also the growing threat from platforms like LinkedIn, eager to turn into publishers and get the business crowd’s eyeballs. Below, a comparison of Bloomberg and WSJ’s marketing attempts.

What is it
Bloomberg’s new campaign, which began in December but was only publicized last week, sought to move the spotlight off the stodgy finance dude and over to cooler businesspeople who work in offices with glass walls, not actual walls. The out-of-home ads were placed in coffee shops in New York, at Grand Central Terminal, and on bus routes where Google runs its vehicles in San Francisco.

The Wall Street Journal wants consumers to be as cool as Black Eyed Peas frontman will.i.am and as creative as fashion mogul Tory Burch. Its own campaign, like Bloomberg’s, goes beyond Wall Street to spotlight ambitious and cool entrepreneurs and businesspeople. The campaign is broadcast, print, out-of-home and digital.

Ad spend
The Journal didn’t provide a specific figure, but a spokeswoman said it was “multimillion.” For Bloomberg, the pricetag was $1 million, with half of it spent on out-of-home ads and the rest on television and social.

The CMO statement
“This campaign highlights the value of making time to read the Journal, no matter how busy people are,” said Suzi Watford, CMO at Dow Jones. “It also confirms that subscribing to the Journal puts you in a community with other ambitious people who prioritize being at the top of their game. Our subscribers are in very good company.”

The campaign’s purpose is “to broaden awareness of Bloomberg as the most essential source for global business and financial news: modern insight for leaders of the new economy,” said Zazie Lucke, head of marketing at Bloomberg Media.

The verdict
Sam Becker, creative director at Brand Union, said that Bloomberg’s new site “is an obvious signifier that they’re after a new type of reader and are willing to make sacrifices in order to make that happen. Their latest campaign is calling attention to the progress they’ve already made. This will help their chances for success because the ads are organic to the brand.”

On the other hand, said Becker, The Wall Street Journal campaign seems to be more about recontextualizing the same product but for a new audience. “Inevitably, this will appear superficial and therefore be a tougher proposition for the brand to pull off.”

He added that the people featured in the campaign are very high-level, which reinforces the status quo of who the WSJ is really for. “The Wall Street Journal is an institution, and it will take more than a campaign like this to change perceptions and alter the composition of their readership.”