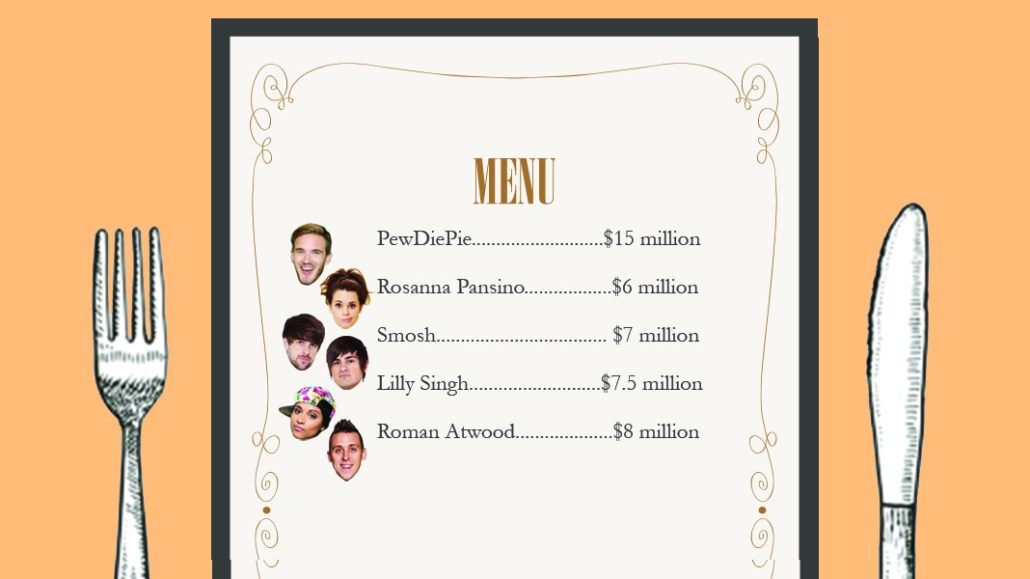 A lot of people talk about influencer marketing, but few understand how it is priced.

Influencer costs can range from a couple of hundred to millions of dollars on one platform or across social networks, because of all the factors that go into it, including exclusivity, engagement rate, following size and usage rights.

While there isn’t a well-developed pricing structure behind influencer marketing, we asked agencies, talent agents and social stars themselves about some general guidelines that brands can refer to when they write influencers a check for their endorsement deals on Instagram, Snapchat and YouTube.

Instagram: $1,000 per 100,000 followers
Chelsea Naftelberg, associate director of content and partnerships for social media agency Attention, estimates how much her team should pay an Instagram influencer based on $1,000 per 100,000 followers. Then she negotiates the deal from there, adjusting the price up or down based on other factors like engagement rate, campaign length and the client budget. “If I have a great brand offering, sometimes we will pay no fee because the influencer is excited about the product or experience,” said Naftelberg. “Also, if you are working with a talent agent instead of directly with an influencer, expect to pay a little more to take their fee into account.”

Langer thinks that brands can start with $250 per Instagram post for social stars with less than 50,000 followers, then add roughly $1,000 per 100,000 followers per post. For well-known celebrities, the price has to go much higher. Kim Kardashian, for instance, reportedly charges over $250,000 for an Instagram photo.

Snapchat: Starting at $500 per campaign in 24 hours
Audience size is not available on Snapchat, so social stars on the platform typically negotiate an endorsement deal based on active views. Since repeated views only count as one view and views are more intentional on Snapchat, rates on the platform could be higher than other networks, according to Snapchat influencer Cyrene Quiamco.

Quiamco shared the following rates given by brands and agencies based on conversations with roughly 35 Snapchat influencers in her circle. (View numbers are only valid for 24 hours.)

An anonymous influencer said that pricing often falls on the agencies. Shops specialize on Snapchat marketing typically pre-decide their budget per influencer and book social stars for content by bulk. The agency would sign them up for 20 campaigns with minimal turnaround time, for instance. And then after 20 campaigns, the agency will pick up a new round of social stars and continue the cycle.

“This is really taxing on the influencer but really helps the agency cut down on cost,” said the influencer. “The agency then upcharges each influencer campaign, sometimes up to 90 percent.”

“Super successful YouTubers like Bart Baker or The Gabbie Show could easily cross the $100,000 mark,” he said.

Of course, that is just a general pricing guideline for influencer marketing on YouTube. For instance, a Redditor posted that a very popular YouTuber with a few million subscribers offered an endorsement deal for a rate of either $17,600 for two to three talking points or $22,000 with an additional description link in the video.

Adam Wescott, partner and co-founder for talent agency Select Management, said that pricing of endorsement deals on YouTube can run from $200,000 to half a million per video, depending on if it is a 30-second brand mention, a customized promotion video or other format.

“Pricing is also based on subscriber count, time watched on the video and the industry the YouTuber is focused on,” said Wescott.

And a YouTuber like Gigi Gorgeous who has accumulated over 2 million subscribers can earn more than $100,000 per video for dedicated brand integrations, he said.