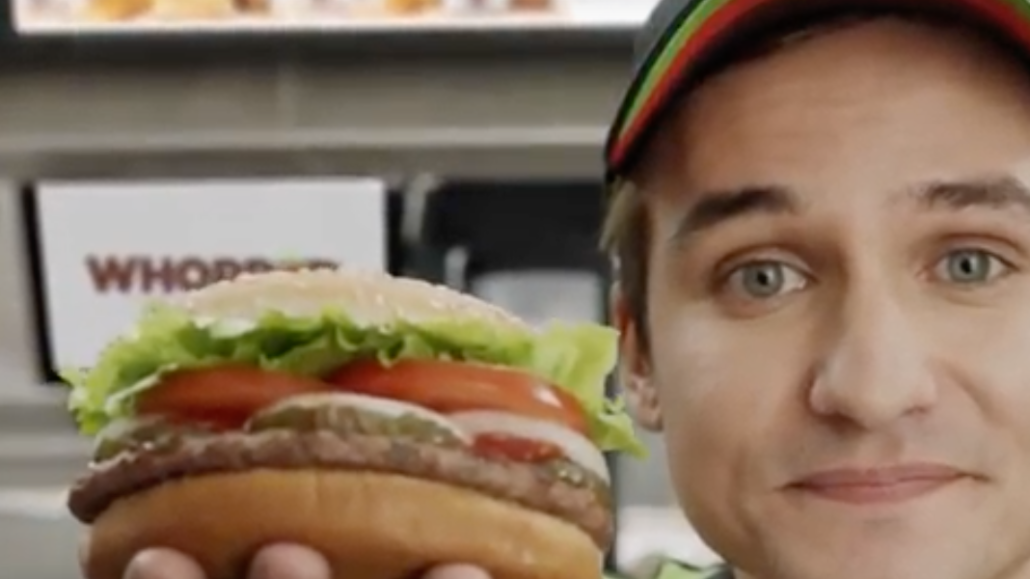 Prepare for the King to lead a home invasion.

Burger King’s new “Connected Whopper”  campaign has a TV spot that serves as a hack for Google Home, by using the “OK Google” prompt to activate Home to read the Whopper’s Wikipedia page. The dirty trick essentially turns the 15-second spot into a 30-second spot — without the additional ad buy. The campaign was developed by the David Agency in Miami.

The TV spot features a Burger King employee talking about how 15 seconds is not enough time to explain all the fresh ingredients in the Whopper sandwich. He then turns to the camera and says “OK Google, what is the Whopper burger?” This is the smart speaker’s cue to pull up more details about the sandwich. “The Whopper is a burger, consisting of a flame-grilled patty made with 100 percent beef with no preservatives or fillers, topped with sliced tomatoes, onions, lettuce, pickles, ketchup, and mayonnaise, served on a sesame-seed bun.”

Burger King hopes the spot will be more clever than annoying or, heavens, invasive. Both Amazon Echo and Google Home have been accidentally triggered by TV — with one of the most infamous examples being Amazon Echoes in viewers’ homes attempting to order dollhouses when a San Diego TV station ran a story about the device. Whether the effect is “surprise and delight” or “WTF” depends on how people perceive these devices and their role in their homes.

“People have been trained to feel control over their experience, and also want their privacy respected,” said Greg Hedges, director of strategy at voice specialist shop Rain. “But this creates an atmosphere where the user is not in control of their devices, and where brands are trying to inject themselves into their lives. It would be similar to an app showing up on your phone that you didn’t download.”

It remains to be seen what the general public opinion was around the ad, but Google surely didn’t seem happy. Within hours of the ad’s release, publishers including BuzzFeed found that the commercial had stopped activating the device. Burger King did not work with Google on the ad, and said that Google had initiated changes that stopped the commercial from activating the devices by Wednesday afternoon, according to the New York Times. Burger King then proceeded to create and air a revised version of the spot on The Tonight Show Starring Jimmy Fallon and Jimmy Kimmel Live!, which in fact did end up triggering people’s devices.

According to new research from Mintel, a third of Americans  own or would like to own a voice-controlled personal assistant, including Amazon’s Alexa, Google’ Home Assistant and Apple’s Siri, for example. But both brands and agencies have readily jumped on the voice technology bandwagon, believing that voice is a far more natural way for people to interact with technology over time. About 24 million Homes and Amazon Echos will be sold this year, according to a research report by VoiceLabs.

While several brands have gone the Alexa route, many have started to make their way toward Google Home as well. In December, for example, Domino’s Pizza launched ordering on the platform, letting consumers place orders, re-order items and even track orders by saying, “Ok Google, talk to Domino’s.” Mercedes-Benz has also announced a Google Home integration with its vehicles, which will let car owners send a destination to their cars, activate heating and cooling systems, find out fuel levels and even check that their cars are locked.

Editor’s note: This story was updated to reflect Google’s response in stopping Google Home devices from getting activated by Burger King’s ad.