‘They are walking the walk’: Nike’s Kaepernick campaign walks the talk on brand purpose 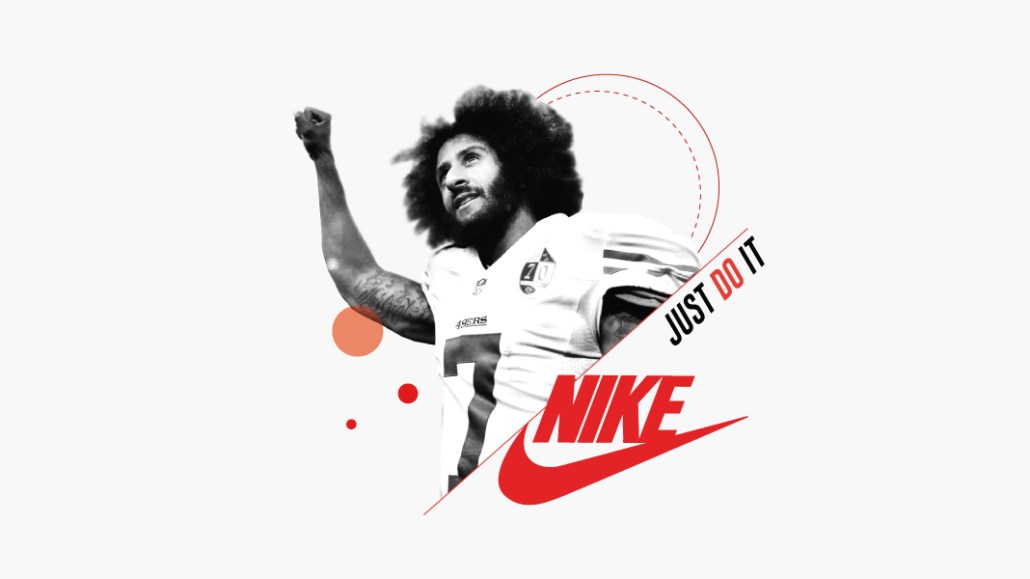 Unlike some companies that do little more than talk about brand purpose, Nike is walking the talk with the rollout of Colin Kaepernick in its new “Just Do It” campaign.

Advertisers say Nike’s decision to include Kaepernick, the former San Francisco 49ers quarterback who ignited a movement for athletes to protest police brutality and inequality after kneeling during the national anthem, is one the fiercest displays of purpose-driven marketing they’ve seen and possibly one of Nike’s best marketing decisions to date.

“Nike is not new to making bold statements, but this has to be one of, if not, the boldest moves,” said Yadira Harrison, co-founder of marketing consultancy Verb. “Knowing this is a campaign and not a one-and-done ad makes this all the more sweeter.”

Making this move as one of the NFL’s biggest partners with a reportedly billion-dollar deal in place, is also quite a feat, said multiple marketing experts.

“They are walking the walk,” said Chris Allieri, founder of public relations branding firm Mulberry & Astor. “It’s one thing to say you support freedom of expression, but it’s another to showcase it, laud it and promote it with a multimillion-dollar campaign.”

Nike’s move is already paying off, at least in terms of publicity. In less than 24 hours since Kaepernick tweeted out his Nike ad with a tagline reading: “Believe in something. Even if it means sacrificing everything,” Apex Marketing Group told Bloomberg Nike had already received more than $43 million worth of media exposure. Kellan Terry, data manager at data analytics firm Brandwatch, said the spike in Nike mentions on Twitter between Sept. 2, the day before the tweet went out, and the day of the announcement saw more than a 1,300 percent jump in online mentions of Nike. As part of the campaign, Nike will produce Kaepernick apparel, including a shoe and T-shirt, and will donate money to Kaepernick’s “Know Your Rights” campaign, as reported by The New York Times.

There’s no doubt that using Kaepernick is a risk. The football star, who remains unsigned by an NFL team, hasn’t appeared in a large campaign with a major brand since the 2015 football season. Advertisers have claimed he was too polarizing for any brand to take a chance on.

By the end of day Tuesday, Nike’s stock had dipped by more than 3 percent from the news that Kaepernick would be featured. The campaign garnered considerable backlash on social media as well, with some customers posting about cutting up or throwing out their Nike merchandise. By noon, the trending hashtag #BoycottNike had over 188.4 million impressions on Twitter, according to data analytics firm Brandwatch.

Allen Adamson, assistant professor of brand strategy at New York University and co-founder of consultancy Metaforce.co, said Nike knows it cannot appeal to everybody. Otherwise, it would come off as inauthentic or unclear of its direction, a common problem with companies when they try to pursue purpose-driven marketing. “The marketplace is so fractured and polarized today that if you try to keep everyone happy all the time, you will become invisible,” he said.

With all the attention Kaepernick is receiving, it might seem like he is the face of the entire campaign, but Nike isn’t placing the entire campaign on Kaepernick’s shoulders. A Nike spokesperson said he is one of a number of athletes who are being featured. Nike launched the campaign last week with a spot featuring tennis star Serena Williams entitled “Voice of Belief.” Other athletes, like Seattle Seahawks linebacker Shaquem Griffin and Odell Beckham Jr., wide-receiver for the New York Giants, are also part of the campaign that celebrates inspirational athletes who have chased dreams no matter the obstacle or outcome. (Griffin has one hand.)

“This is the kind of advertising that has helped build Nike to what it is today – and exactly what we should be seeing from the Just Do It campaign,” said Katy Wellhousen, account director at influencer agency RQ. “The campaign has lasted three decades because of Nike’s ability to weave it into powerful and personal stories.”

The backlash shouldn’t last too much longer than another day or two, said Terry. Even with cringe-worthy cases like the Pepsi Jenner Kendall fiasco, social media comments died down within days of the controversy, he said. “Nike is no stranger to taking a stance for what they believe to be right, and one can certainly assume they knew the reaction they’d receive.” Nike would not comment on how much backlash they expected.

“In an era when most politicians and brands are ossified into inaction by fear, a lone voice of opposition can be heard that much more clearly,” said Anthony Cospito, head of strategy at digital creative agency Moving Image & Content.

Nike’s relationship with the NFL doesn’t seem to be on shaky ground either, even though Nike is partnering with an athlete who filed a grievance alleging the league of not signing him to a team because of his political views.

On Tuesday, the NFL released a statement. “The National Football League believes in dialogue, understand and unity. We embrace the role and responsibility of everyone involved with this game to promote meaningful, positive change in our communities,” said Jocelyn Moore, evp of communications and public affairs at the NFL. “The social justice issues that Colin and other professional athletes have raised deserve our attention and action.”