What it means: Vivendi swallows Havas 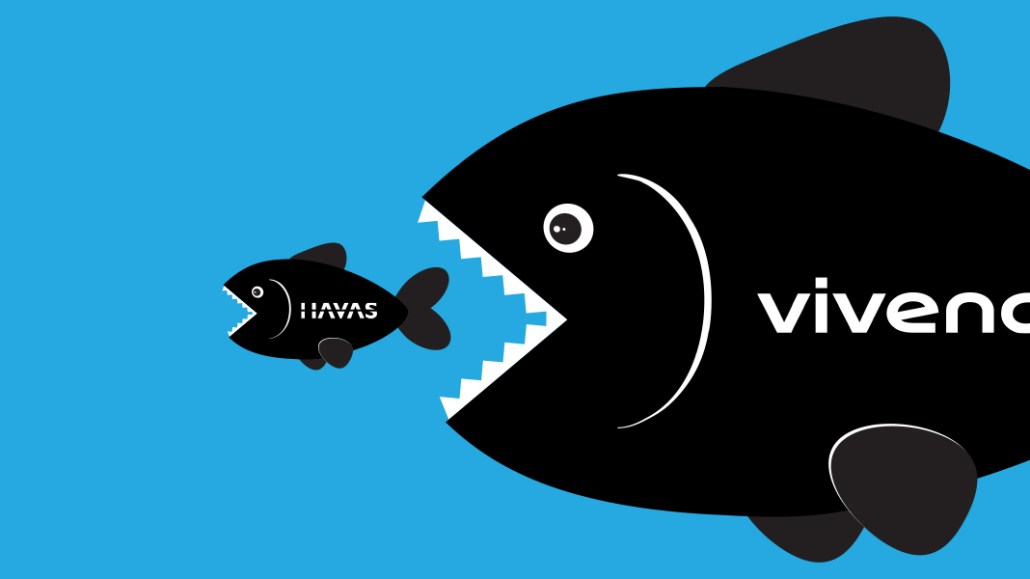 After years of speculation, the merger between Havas and Vivendi took a step closer to completion yesterday.

It’s premature to judge this merger but wise to watch it closely now that Vivendi has signed on the dotted line to acquire the roughly 60 percent majority stake Bolloré Groupe holds in Havas for $2.5 billion. The long-mooted linkup has always been dogged by suggestions that the advertising arm could easily become the in-house agency for Vivendi’s Universal Music Group and Canal+ businesses.

WPP boss Sir Martin Sorrell is among those wary of the union and has questioned whether the Bolloré family’s influence over both advertising and media businesses should be formalized given the sway it already holds in each boardroom. Havas is currently under the leadership of chief executive Yannick Bolloré, who is the son of Vincent Bolloré, the chairman and dominant shareholder of Vivendi.

In a business dominated by a handful of holding companies, the as-yet-unnamed entity would undoubtedly offer brands something different to those larger businesses, but how different remains to be seen. Havas has made a lot of noise about the ability of the combined businesses to weave together creative, media, data and content to offer a tapestry of unique solutions for brands that the global networks and management consultancies cannot.

In practice, the impact of this is “unlikely” to be significant, observed Tristan Rice, partner at mergers and acquisitions advisory SI Partners. The businesses cannot be “too closely” aligned, he continued, without compromising Havas’ media-buying independence, and “if closer collaboration was such a slam dunk for brands, they could have built on the relationship that already exists between them to deliver these benefits already.”

Expect Vivendi-Havas to come up with new content packages for its clients that utilize Vivendi’s media channels. At the same time, Havas is likely to quickly erect processes and structures to reassure both current and potential advertisers that it is not an in-house agency and that Vivendi’s media properties will not be favored over other channels.

The other big question is how the combination of these businesses will allow Havas to exploit Vivendi’s skills in talent management. For all the businesses’ talk of how this “convergence would be attractive for our talents,” Havas will have its work cut out proving why being closer to Universal Music Group makes sense to brands.

“It’s not like the Bollorés didn’t already know how to get Taylor Swift’s agent on the phone; it’s not like these weren’t possible before,” said Brian Wieser, a senior analyst at Pivotal Research. “There needs to be something tangibly different for advertisers than what they could’ve accomplished before because operational integration [between Vivendi and Havas] doesn’t seem to be the focus, especially when it’s not 100 percent.”

Few brands can say they have a long and successful music strategy and even fewer can say they truly understand content. Advertisers could potentially use Vivendi-Havas as a way to change this, sifting through the media conglomerate’s contacts book to get closer to emerging bands on Universal’s roster or move in on an exciting script Canal+ had been developing.

Havas goes from being a potential target for a management consultancy to a protected entity with a point of differentiation from the cacophony of agencies, holding groups, consultancies and broadcasters rapidly encroaching on its space.

“Havas currently sits outside the top holding company groups,” said Mark Cox, a director at M&A advisory Results International. “It has been far less acquisitive than the likes of WPP, which has completed 150 deals over the past three years, whereas Havas has completed less than 30. However, the new ownership provides a platform to build out its distinct offer through further M&A. This will allow it to compete with the larger agency holding companies and also help to counter the threat from the consultancies.”