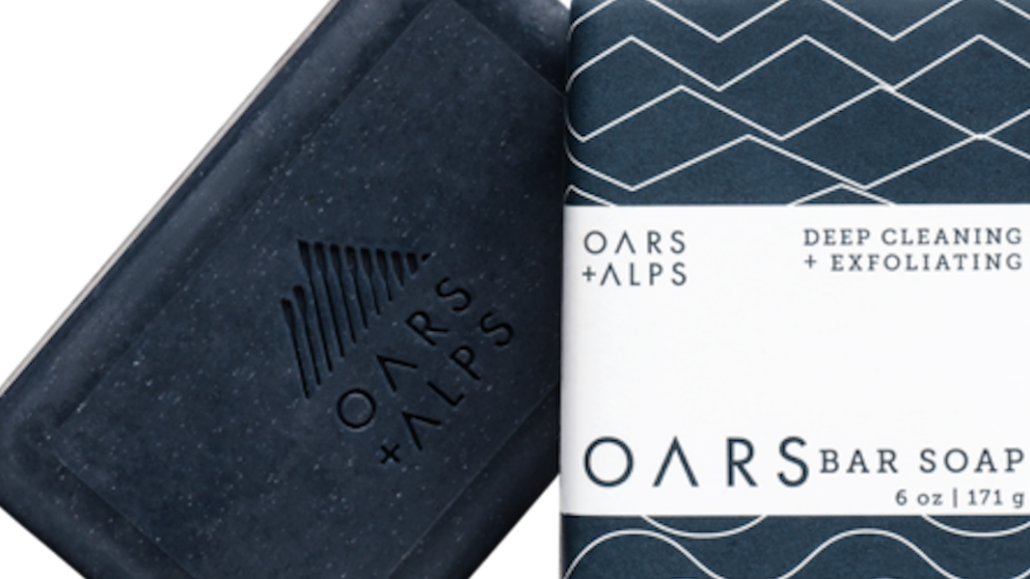 Two-year-old men’s grooming line Oars + Alps is in growth mode. The brand, which until this point sold primarily through its own channel, with a select number of products on the Amazon Luxury Beauty platform, expanded into over 300 Ulta Beauty doors and Ulta.com last month, marking its first retail partnership.

This is the first major play for the brand since receiving a $1.3 million seed-funding round from Breakout Capital and Levy Family Partners in June 2017. The grooming brand, known for its masculine charcoal soaps, natural deodorants, and face and eye creams, is also testing experiences with lifestyle brands to increase its customer base.

Currently, 95 percent of Oars + Alps revenue comes from its own website, with its curated bundles of product as its best-sellers, but Ulta represents a significant awareness play, said co-founder and CEO Mia Duchnowski, who hopes to draw attention to its single products in stores.

Oars + Alps is part of Ulta’s new men’s grooming strategy. Following the addition of men’s brands, like House 99, created by David Beckham, and hair-care and skin-care line Baxter of California earlier this year, Oars + Alps became the third new grooming brand for the retailer in a matter of months. In stores, Oars + Alps is displayed in a prominent curated end cap with the tagline “Skincare every man’s gotta have,” alongside existing men’s brands such as Rebel’s Refinery and Every Man Jack. Online, Oars + Alps is currently being promoted in Ulta’s New Arrivals section. It’s a similar playbook that Ulta employed around its budding unisex category with natural skin care-brand Little Barn Apothecary.

“Men’s grooming products have been part of our assortment for a number of years, and interest continues to grow thanks to emerging brands making the category more accessible and more mainstream,” said Paul Desiderioscioli, Ulta Beauty vp of merchandising. “Products made specifically for men’s needs have expanded well beyond shaving products to hair-care and skin-care regimens.” Ulta did not break out its men’s sales, but currently there are around 250 products in the men’s category on its site — that however, does not include brands that serve both men and women like Kiehl’s and Little Barn.

Though the men’s grooming category is dominated by legacy players like Procter & Gamble’s Gillette and Old Spice — they both rank as the top two brands in the category — and Unilever’s Axe, the segment is growing: nearly 15 percent from 2012, to 8.7 billion in revenue for 2017, according to Euromonitor International. But newer, updated brands are coming to market for a savvier customer, and Ulta CEO Mary Dillion even called out House 99 as driving incremental growth in the retailer’s skin-care category in its March earnings call.

Only seven of Oars + Alps products will be sold at Ulta Beauty — on its own site, the brand has 23 items, including its curated kits and tangential items like soap tins, travel bags and baseball caps — but Desiderioscioli was drawn to the brand’s hero products for the Ulta assortment and those with a portable nature, like the Oars + Alps cleansing wipes, which are good for the on-the-go Ulta customer, he said.

For Duchnowski, the partnership also helps tap the female Ulta customer, who is shopping for the men in her life, as well as herself. Seventy percent of Oars + Alps customers are men, and 30 percent are women. Among women specifically, 20 percent of consumers are buying products for themselves, and about 10 percent are gifting, she said. “Ulta also allows us to really focus on the women who buy our products because they like the natural ingredients, clean scents and the non-girly packaging,” Duchnowski explained.

Oars + Alps started with three products and has expanded its assortment considerably in less than two years. The grooming brand vets and launches all products with over 300-person focus groups, but the Ulta relationship helps the brand further product innovation through its CRM capabilities, i.e., Duchnowski plans to target past Ulta’s male customers and send them communication and samples of Oars + Alps merch to create new engagement. Oars + Alps will also be featured in Ulta’s holiday sampling program in the winter.

Though Ulta helps Oars + Alps expand with distribution and store placement, Duchnowski said it’s still up to the brand itself to drive external awareness. The company would not reveal revenue, but it did say it has seen its customer base grow 60 times in 2018 alone. Aside from one-on-one in-store trainings, Oars + Alps has seen considerable engagement by partnering with like-minded lifestyle brands like Nike, Bonobos and Peloton on seeding product through partnerships.

In September, the grooming brand collaborated on runner vending machines in Lululemon Chicago and New York stores, and also seeded product at the Michelob Ultra FitFest in Scottsdale, Arizona. “We are all about making products that work as hard as our customers do, so being at these events fit the ethos of our brand perfectly,” said Duchnowski.