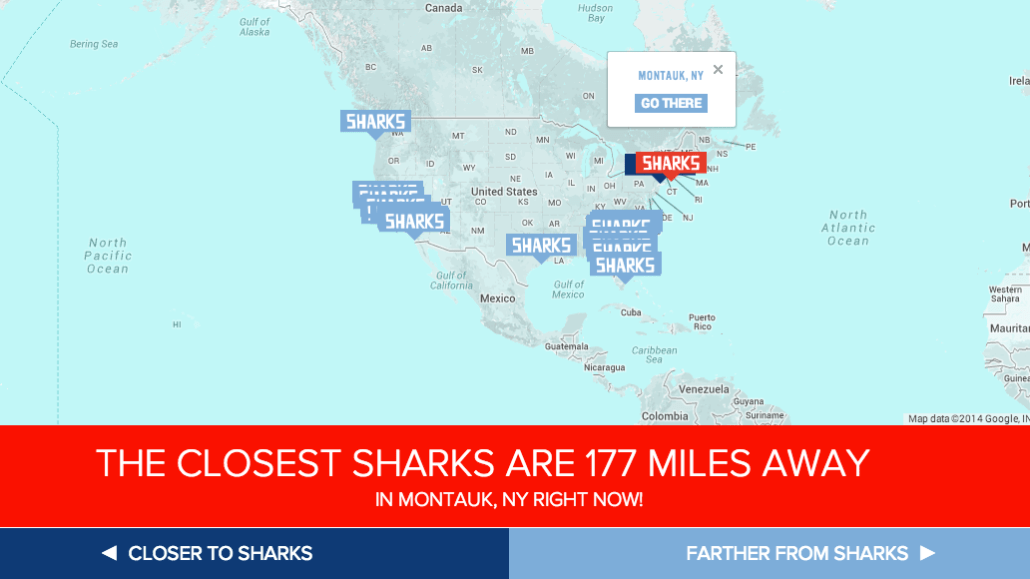 It’s been 27 years since Discovery Channel first debuted “Shark Week,” but the shine hasn’t come off the week-long summer television event. Brands have recognized this, and are glomming onto the event with their own social media blitz.

One of our favorites is Travelocity. HowFarAmIfromSharksRightNow.com has that enviable combination of being both timely and on-brand. The site, developed by McKinney, shows you where your closest sharks are. Do you want to get closer to them? Pins show you the beach destinations nearby where the creatures have been spotted — you can click into them to book a trip.

If you’d rather flee the amphibians, the Travelocity Roaming Gnome — the garden spokesgnome from their advertising — also shows you where the closest shark-free cities are. The effort is both paid and earned. McKinney associate creative director Stevie Archer said that last year, the brand had gotten in on the buzz with just a tweet.

This is how I handle #SharkWeek : pic.twitter.com/juXQy0mhwk

“We had such good results that we wanted to do something more interactive and engaging than the ‘insert your brand icon and a shark joke here’ effort,” she said. The agency included Shark Week on its social media opportunities calendar, and began working on the campaign in July. Since launching Friday, the campaign has led to 32,000 total Twitter engagements and site visits. Total impressions to date are 261,000, according to the agency.

Laura Suchoski, social media manager at McKinney who handles the Roaming Gnome’s presence online, said that the idea was to give fans entertainment and utility at the same time.”The whole buzzword of real-time marketing is well and good but this idea was concepted weeks ago,” she said. Travelocity is only the latest brand to jump onto the burgeoning popularity of Shark Week. Most other efforts have been more expected, however. Travelocity competitor Priceline, for example, went the Photoshopped image route, featuring a diver approaching a treasure chest full of cash as a shark looks on.

Trust us, there are easier (and safer) ways to find savings on your #SharkWeek vacation. #ExpressDeals pic.twitter.com/iPlJ2laqr4 — Priceline.com (@priceline) August 10, 2014

Cap’n Crunch, however, is too badass for your Shark Week shenanigans.

Spotify may not have much, but at least it has the tunes.

Shark Week sponsor Volkswagen, which built a subaquatic Shark Cruiser out of a Beetle Convertible a couple of years ago, proved doesn’t do things halfway — it has a whole site devoted to the program.