TikTok wants to prove it is an effective ad platform — quickly.

TikTok’s ad platform, available in beta to a select number of agencies, is testing interest-based targeting, custom audience and pixel tracking, according to four advertising executives. Those options are in addition to targeting by age, gender, location, operating system and network on the device. Sales leaders at the short-form video app have been telling agencies they plan to release this beta version of its self-serve ad platform more widely in July, sources said. (Adweek first reported plans for a biddable option and more targeting in February.)

With these updates to its ad system, TikTok is looking to attract marketers who are interested in the app but wary of its performance. In a March Digiday+ survey of 231 media buying executives, respondents ranked TikTok as the platform with the least effective audience targeting capabilities. 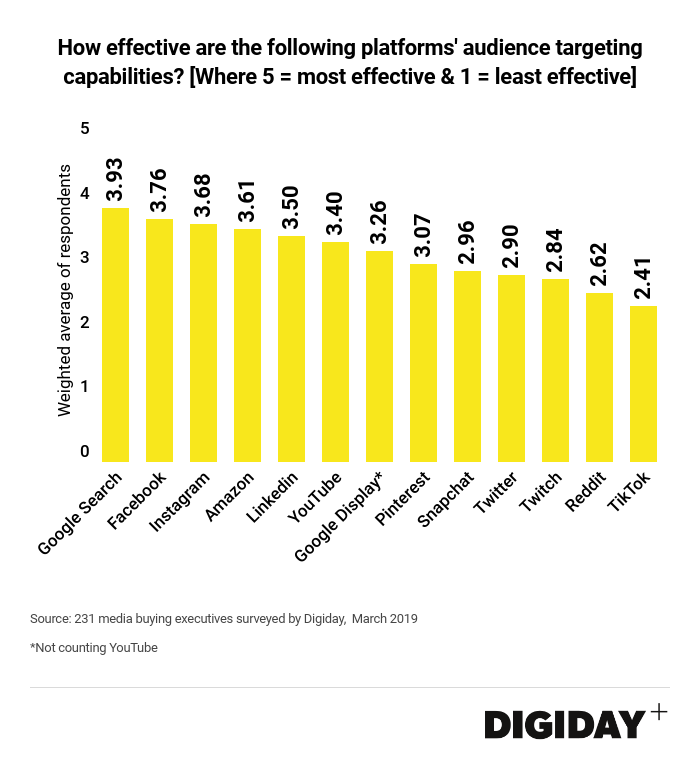 A TikTok spokesperson said the company is testing various features for brand partners while the main focus is on creating a good experience for larger TikTok community.

An agency executive, who had a pitch meeting with TikTok last month but has yet to buy ads on the platform, said interest-based targeting would make them more confident of ad buys on TikTok since they could simply be more precise. The move better positions TikTok as an effective buy rather than simply a “shiny object” that marketers are intrigued by due to its young audience with high engagement, the executive said.

Though, another agency executive who has chatted with TikTok said they had low expectations for the functionality — at least in its infancy. TikTok’s current capabilities won’t be as good as Facebook’s due to the newness of TikTok, the executive said.

TikTok representatives did not elaborate on what specific categories are offered in their meetings with new partners, sources said. One buyer said they expected the options to be similar to Snapchat’s lifestyle categories. Snapchat’s lifestyle categories, which were released in September 2016 alongside lookalike audiences and audience match, include 117 segments such as “American Football Fans,” “Movie Theater Goers” and “Online Shoppers.” These categories are based on a Snapchat user’s activity within the app, namely what types of content they spend the most time on.

Even with the limited targeting options, some brands are currently buying ads on TikTok. A spokesperson from GrubHub, which was one of the early advertisers on TikTok, told Digiday last month that ad performance has continued to “meet or exceed our expectations.” Other marketers like Red Bull and Sony are testing the app with their own accounts. Publishers like ESPN and NBC News also have created their own accounts.