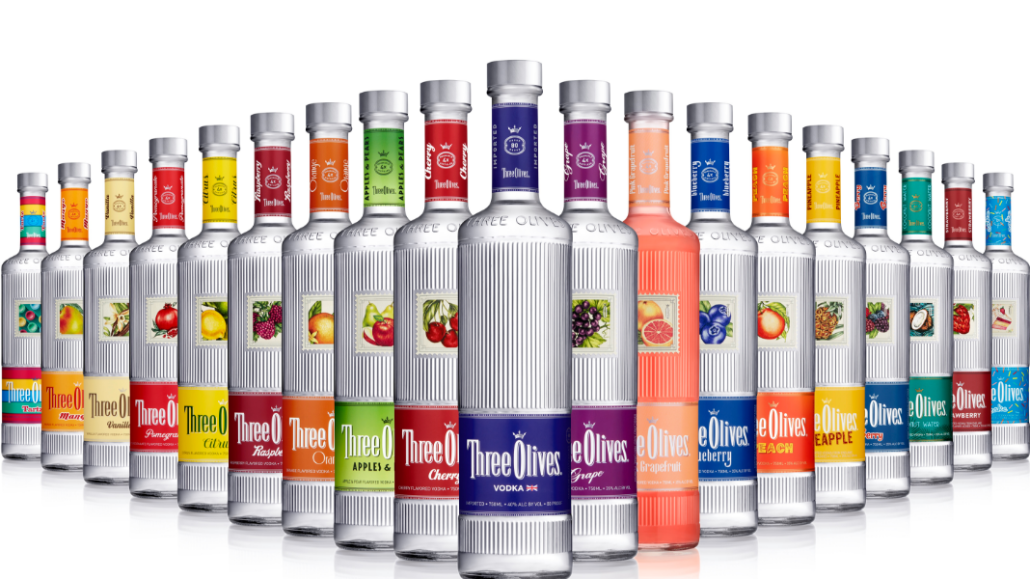 Its competitors may be riding the craft cocktail wave, but Three Olives vodka is sticking to its flavored vodka roots.

“Craft is not our approach, it’s not who we are,” said Erin Chin, group brand director at Proximo Spirits, Three Olives’ parent company. “We’re about flavor, fun and good-quality vodka that brings people together.”

The brand may be sticking to flavor, but it has revamped its advertising efforts. The spirit brand has a newfound focus on digital advertising — a marked departure from its previous approach since its launch in 1998. Until recently, the brand focused heavily on traditional TV and print advertising, whereas the focus now is on a digital strategy based on platforms like Facebook and Instagram as well as influencers. According to Chin, two-thirds of the brand’s total advertising budget is now devoted to digital. (Chin declined to give specifics, but the brand has been known to spend as much as $20 million toward campaigns at one point.)

“It’s a total relaunch of the brand in terms of where we’re choosing to show up,” said Ken Matsubara, creative director at The Via Agency, the brand’s creative agency. “We realize that it’s a cluttered category and where we interact with our consumers really matters.”

Three Olives has also been facing increasing problems with competition. Between 2005 and 2010, it was one of the best-performing brands in the U.S. spirits market, winning six consecutive Impact Databank “Hot Brand” awards between 2005 and 2010 as well as witnessing years of double-digit growth. Today, it has been displaced by the likes of Tito’s and Svedka, with the former winning the Impact “Hot Brand” honors for the past eight years and the latter now the top imported vodka in the U.S. in 2016.

However, the brand’s growth has slowed considerably, with many rival brands gaining steam and imitating the exotic flavor range that set it apart from its competition. Growth has been flat since 2014, according to Shankan News Daily.

Its in-house marketing team of three is now doubling down on social content. Facebook remains its most important platform with over 455,000 fans. In contrast, Tito’s has 70,000 followers and Svedka has over 2 million.

New content is a mix of useful recipes that highlight its 20-plus flavors. This GIF on the brand’s Instagram page, for example, shows its cherry-flavored bottle making a Red Carpet appearance, and coincided with the Golden Globe Awards this year.

Roll out the red carpet, #ThreeOlives is making an entrance. #GoldenGlobes

The brand also relies heavily on influencer partnerships. But instead of licensing deals with big names like Lil’ Kim and the estate of Marilyn Monroe, with which it partnered with in 2013 to create a Marilyn Monroe Strawberry Vodka, the focus is now on social influencers. Its recent “Find Otherness” campaign, for example, features people like like body painter Johannes Stötter and fashion designer Ron Bass, each of whom have a unique point of view on fashion and art among other fields.

Chin added that the brand would also double down on paid media on Instagram, Facebook and even Snapchat going forward, which also had not been a priority so far. At the Coachella festival later this month, for example, Three Olives will sponsor its very first Snapchat filter.

“We’re acutely aware of what’s happening in the category, but we think vodka is still alive and kicking,” said Chin.