Long shunned by whiskey aficionados for being a less sophisticated spirit, vodka has been enjoying a recent resurgence thanks to a new generation of cocktail-oriented consumers. Riding that wave is Tito’s, a mid-priced “handmade” and copper-kettle distilled vodka brand from Texas.

The nearly 20-year-old brand was mostly confined to the bars of artisanal distillers and craft speakeasy mixologists until recently. But Tito’s is suddenly ubiquitous — the default vodka that barkeeps reach for quicker than you can say “potato.”

“When I started bartending nine years ago, if and when people ordered a vodka drink, it was always Kettle One,” said Erin Felgar, a bartender who has worked in and owned bars in Manhattan and Brooklyn. “Today, Tito’s is the go-to vodka for everyone, whether you’re a guido or a Park Slope mom.”

The credit goes to the brand remaining true to its artisanal heritage.

“We’ve definitely been fortunate beneficiaries of this shift in the zeitgeist across the country,” said Nicole Portwood, vp of brand marketing at Tito’s Vodka. “But unlike other brands that have begun to cast themselves in that light because it is trendy, we have been an artisanal brand all along.”

In the days before social media, Tito’s built its brand through old-fashioned word of mouth. Its founder, Bert “Tito” Beveridge (no kidding), spearheaded the efforts — sharing his story, giving away samples and partnering with bartenders and musicians across Austin. He also designed the brand’s packaging and recycled brown paper label on his own, using the now-outmoded software Corel Draw.

The emphasis on craftsmanship extends beyond distilling vodka, though. Portwood and her two-person social media team run the brand’s the “Meet the Maker” campaign on Facebook. They team up with artisans of all kinds to celebrate the “American craft movement.” Since launching last year, they’ve profiled a chocolatier, a leather worker and even a sock designer, partnering with each to design and sell limited-edition merchandise. 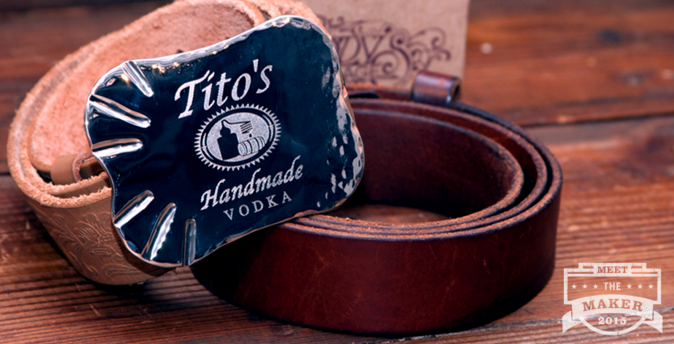 Another recent digital campaign, called “Fresh Start,”encourages fans who are looking for some direction in life to play a game called the “Line Down the Middle Exercise.” Beveridge himself did it two decades ago, when he was a realtor who distilled flavored vodkas on the side. The game — which allows players to discover where their passions intersect with their talents — inspired him to go into the spirits business full time. Players are encouraged to share it with the brand by posting it to Twitter or Instagram with the hashtag #TitoMoment.

Apart from the feel-good campaigns, Tito’s has also been maintaining a robust social media presence, frequently posting on Twitter, Facebook and Instagram — where it has over 45,000 followers, 54,000 and 30,000 followers, respectively. This has landed it a spot in L2’s 2015 Spirits Index ranking, where it performed “comparatively well for a craft brand that lacks the scale and budget of other vodka brands such as Absolut and Smirnoff,” said John Pham, Senior Research Analyst at L2.

“Part of its ongoing appeal stems from its roots in south Austin, Texas, where it is still made — and the ever-present Tito Beveridge, its founder and still its champion,” said Donna Hood Crecca, associate principal at Technomic. “Both of these speak to the authenticity that so many consumers seek today.”

The desire to keep that consumer-centric approach has made Twitter its most important social platform, said Portwood. But the brand is also focused on Instagram and Facebook, where it frequently posts branded cocktail recipes like its competitors. Video is a growing area too, said Portwood, but the brand consciously steers clear of Snapchat and its legions of minors.

“Social has absolutely played a big part in developing relationships with our fans,” said Portwood. “I think a large part of that is attributable to the fact that we do handle all of this in house. So instead of a team that has to refer to a list of brand-approved responses, our team can respond in real time with a real human voice.”

Sip a little sunshine with us… it’s National #Screwdriver Day! Mix 1.5oz of #TitosHandmadeVodka with fresh #orange juice and garnish with a juicy wedge. Cheers!

Tito’s has also made tactical investments to boost e-commerce efforts, such as search-engine visibility, online locators for Tito’s products, and digital contact forms for liquor store owners. All of these together drive product accessibility and make it an even more relevant digital brand, say experts.

“While using digital to ensure that its history resonates with its buyers, Tito’s is still cognizant of using online as a sales driver,” said L2’s Pham. We’ll drink to that.