The One Brand That Dares To Tweet About Trayvon Martin 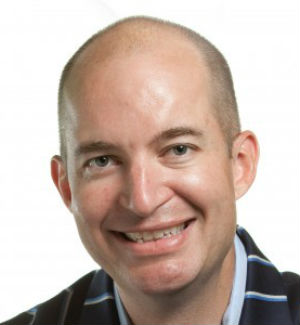 While brands are becoming more and more vocal on social media when it comes to supporting social and political causes, there are still a few lines most companies aren’t willing to cross. With at least one notable exception in The Illuminati, the clothing brand with an activist bent.

The Illuminati caused a stir last Tuesday when it tweeted, “The Only Justice for Trayvon Martin is to take the Life of George Zimmerman. #EyeForanEye #ZimmermanTrial.” The Washington Times published a screengrab of the tweet, which appeared to have called for the death of the former neighborhood watch leader who was found not-guilty in the shooting death of Florida teen Trayvon Martin on Saturday.

The tweet has since been deleted, and another, more restrained Illuminati tweet has since gone out: “We do not support any violence in reaction to the #ZimmermanVerdict however we do believe in #JusticeForTrayvon.”

Ever since Zimmerman was acquitted, the brand, which has more than a million followers on Twitter, has continued to tweet a stream of comments relating to the controversial case: 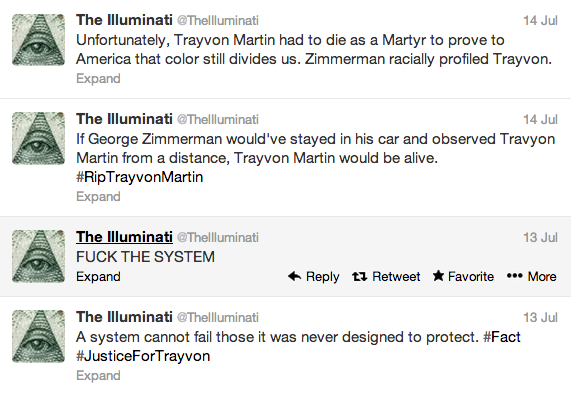 While more and more brands are standing up for previously off-limits topics like marriage equality (Ben & Jerry’s and Svedka) and peace between India and Pakistan (Coca Cola), a controversial legal case that involves racial issues and murder is something that most brands would avoid getting tangled up in.

But then a company that posts articles like “14 Conspiracy Theory Locations You Must Visit,” and sells t-shirts with slogans like “Fuck the police,” is hardly a typical brand.

Still, the Illuminati clearly has a grip on its particular audience: The tweet about Trayvon dying a martyr got 1,410 retweets and 492 favorites.