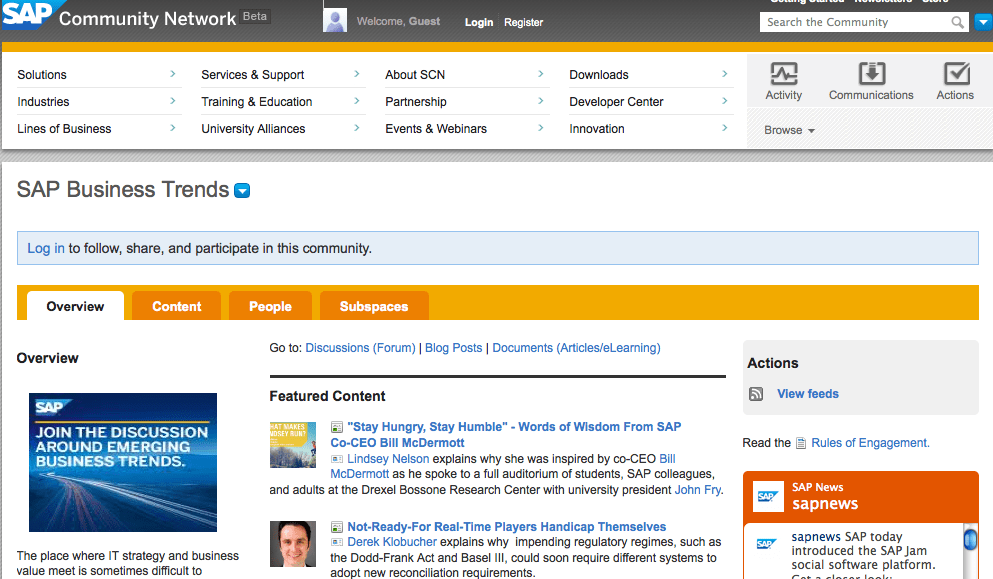 It’s not just the sexy brands like Red Bull creating content. Enterprise software giant SAP is in on the game.

SAP has developed a multi-pronged content strategy that includes developing content for its own sites, as well as content across publisher sites. It has two sites, a general tech trends blog launched in March of this year and a mostly user-generated support site for SAP customers. SAP isn’t The New York Times by any stretch, but it boasts a healthy audience of 100,000 uniques per month.

“We have the big advertising and marketing messages and a lot of grassroots with events and direct marketing-type messages, but no one was managing the in-between,” said Michael Brenner, senior director of content strategy at SAP. “Our content strategy is a combination of creation, curation and syndication.”

The Business Innovation blog focuses on tech issues that would resonate with their audience of business professionals. A typical post is one that details the role social media had during Hurricane Sandy. The content, which ranges from broad topics such as mobile and apps to sales and marketing, is created by SAP employees. While there is text content on the site, there is plenty of visual in the form of infographics and videos. He said the most popular posts are lists, like The Top 60 Sales and Marketing Twitter Influencers. Content on the innovation blog comes from more than 200 writers, with about 90 from SAP, and publishes about 10 times per day.

“We’re trying to maximize the properties we own,” Brenner said. “We’ve built this innovation site in an attempt to become a publisher to become our own media property. But we know it’s not enough.”

Even with its healthy audience, SAP realizes it needs to buy distribution. It’s become an aggressive early adopter of sponsored content. It has deals with both Forbes and Business Insider to distribute SAP-created content. On Forbes, all content is created by SAP employees; on Business Insider, highlighting the curatorial aspect of SAP’s strategy, content will come from a melange of sources, including Business Insider, SAP and other sources from around the Web.

Through its Forbes’ BrandVoice channel, SAP aims to distribute “thought leadership” pieces, like this piece that explains how data-visualization can help companies make better decisions. The company first started on Forbes in November 2010 and publishes between one and three articles per day.

SAP is working with Business Insider to push out sponsored content, which in many cases will be SAP customer stories about how they are innovating and creating new approaches to old — and new — problems.