The Russ effect: Russell Westbrook and NBA stars have turned into fashion icons 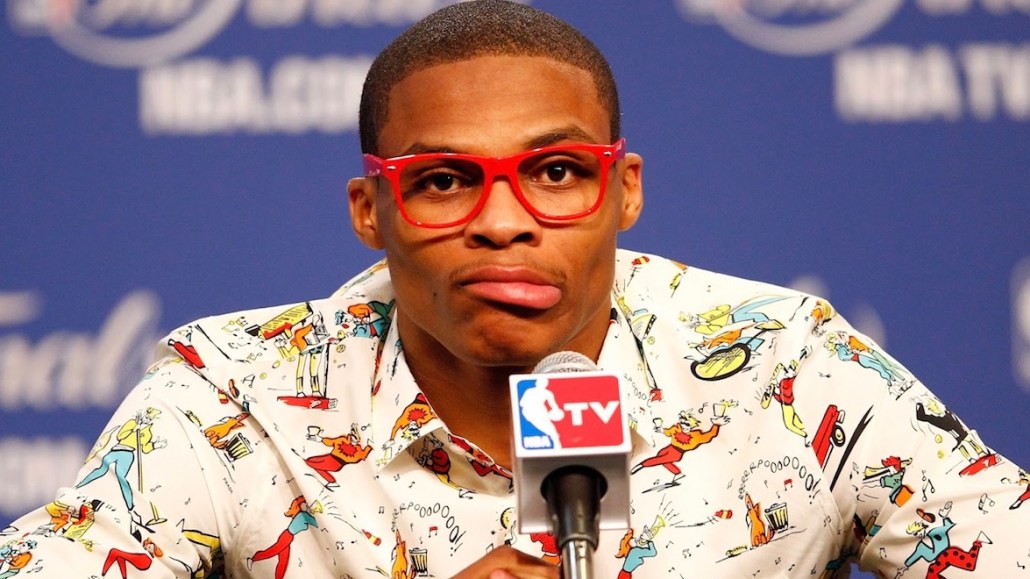 When Russell Westbrook stepped into Chesapeake Energy Arena, home of the Oklahoma City Thunder, in May of 2016, photographers were waiting to capture his latest ensemble. The NBA player was wearing a cropped light-wash jean jacket, white jeans, white sneakers, shades and a scoop-neck tank top. By that point, the Russell Westbrook effect on fashion was in full swing, and photos of the outfit lit up Twitter. The NBA tweeted about it, proclaiming that Westbrook had arrived “in the way only Russ can.”

That influence was felt online. His jean jacket — a $1,595 version made by acclaimed streetwear brand Fear of God — sold out shortly after. At large, Westbrook’s influence on fashion has extended into brand deals, collaborations, a signature pair of Jordans (naturally) and even his own fashion line, Honor the Gift, which hit stores in the fall of 2017. He’s worked with brands like Tumi and retailers like Barneys to design lines.

“When you think about the way NBA style has exploded, Russ is the forefront. He is the dude in every way, shape and form, and it’s because he’s done it best,” says Sam Schube, GQ.com deputy style editor. “Whenever Russell shows up, it’s a fashion runway. He shows off what he’s wearing, and everyone watches, and the rest of the league follows.”

The NBA is having an extended moment in the style spotlight thanks to players like Westbrook, LeBron James and Dwyane Wade, who began representing designers in news conferences the same way they do Nike or Under Armour on the court. The league is effectively setting the tone for style trends, which develop in conjunction with top designers and leading streetwear brands. It’s not that NBA players showcasing their personal style is new. It’s not. The personal style players displayed in the 1990s and early 2000s led to a dress code mandate in 2005 that required players to dress up in suits and ties any time they represented the NBA off the court. The mandate looked to squash out personal style, which at the time was displayed through low-hanging baggy pants the league’s bigwigs deemed unacceptable.

The catalyst of the NBA’s current style stars is the platforms on which the players today are recognized for their sartorial choices.

“The NBA has always been at this point — fashion is a form of self-expression, and these guys have been expressing themselves through what they wear on and off the court,” says Jason Stein, the founder and CEO of Cycle Media. “It’s become more interesting and talked about and trackable today with the advent of social media. The athletes themselves have millions of fans and followers, and when what they’re wearing is posted, there’s massive attention. The walk into the stadium is a huge moment for NBA players to express themselves through their favorite brands.”

Since joining the league in 2008, Westbrook’s style choices have been unabashed and — importantly — polarizing. James, the NBA’s unrivaled MVP, has pulled off collaborations with retailers like Kith, and he can set a trend. But Westbrook’s head-turning style choices, like a neon orange photographer’s vest, an all-denim ensemble or a shirt nearly ripped to shreds, draw attention.

“LeBron and Russ have engaged audiences, and if they wear something and share it, it has a big impact, and that’s why they’re such a big part of marketing today,” says Stein. “You could make the argument that they’re the best in the league as far as style goes. But what sets Russ apart is that he’s not afraid to be himself and try new things. You have to have a high amount of confidence with the new pieces he’s wearing, creating or designing. Some people like that or they don’t, but that’s what makes you a style icon.”

Confidence likely comes easy when Westbrook, at 6-foot-3 and 200 pounds, can easily flaunt high fashion. But for the everyman, there’s been a rise in style sensibility. According to L2 research, the men’s apparel market is expected to grow at a compounded rate of 5 percent over the next two years, more than doubling the expected growth rate of the women’s market. Brands and retailers are reacting by opening stores specifically for men and starting dedicated social media accounts and newsletters in an attempt to capitalize on this interest.

But whether or not Westbrook’s sartorial choices have emboldened the masses to take more fashion risks is another matter.

“He certainly has the fan base and platform to evangelize fashion, and he does that with bright-eyed enthusiasm,” says Brian Trunzo, the senior menswear editor at trend forecasting firm WGSN. “I just don’t know, though, that his voice is widely respected or understood as authoritative when it comes to fashion. I believe he has an influence on other athletes, but at large, I just don’t know if the average person cares or is influenced by his particular choices.”

Trunzo, who insists that he respects Westbrook’s clear affinity for fashion and willingness to take risks, says the word “contrived” comes to mind when thinking of the athlete’s highly stylized fashion choices, be they an acid-washed denim button-down tucked into blue jeans or a pair of round, red sunglasses perched on the end of his nose.

Trunzo said the uptick in menswear can be attributed to a few different factors, like the flurry of trendy retail options such as Bonobos and Indochino as well as the mainstream insurgence of streetwear brands like Supreme.

But overall, athletes have become more fashionable, and Westbrook has been at the center — albeit the polarizing center — of that shift.

“Many athletes have gravitated toward fashion and are addressing much more fashion-forward styles than they have in the past,” said Steven Kolb, the president of the fashion industry trade association the Council of Fashion Designers of America, which has seen an influx of dedicated menswear designers in the past five years. “Young men look to athletes and are influenced by that.”

Whether or not fans think they can pull off Westbrook’s joggers and fitted suits, they can buy a piece of his style sensibility. His work within the fashion industry is pushing the envelope of what’s considered possible for athlete franchises, Schube says.

“I don’t know if athletes knew they could go such places with collaborations before,” he says. “Men’s fashion is completely different than it was even five years ago, and it’s because they see these guys they really admire getting out there and trying things. And if Russell wears a vintage metal band tee, that opens it up to the masses. Fair game.”