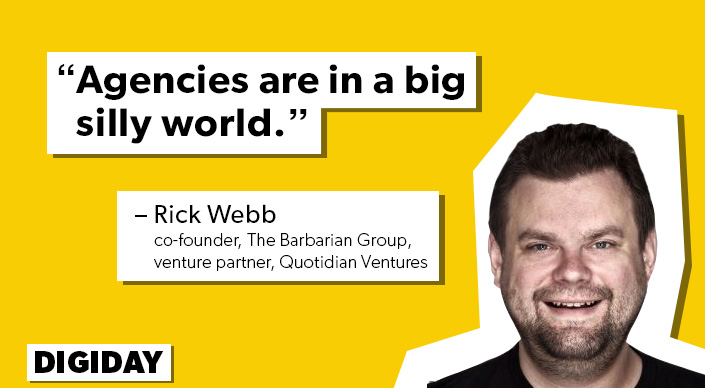 Lately, it seems like every chief creative officer is hell-bent on leaving the confines of the big agency world to hang up their own shingle — a creative, quirky pursuit that’s increasingly difficult, considering the need for scale in almost every facet of the business.

That’s the topic of the new book, “Agency: Starting a Creative Firm in the Age of Marketing” by Barbarian Group co-founder Rick Webb, now a venture partner at Quotidian Ventures in New York. Webb gets into both the prosaic (how to fire people) and the more intangible aspects (culture and how to foster it) of startup agency life. We caught up with him to get some more thoughts on the current state of the business. Excerpts follow.

The agency business would be great without time sheets, right?
I know. It’s so funny. But it’s totally true. It’s a nightmare. It’s awful. I realized now that the part we edited out of the book is actually the part that’s all anyone wanted to talk about.

But it touches on a bigger problem of employee management and how bad agencies are at estimation.
Yeah, but I do believe there’s a little bit of a double standard. When you’re off-target and you make more money nobody talks about it. But when you don’t, its a terrible thing. It’s narrow in vision to assume that the big problem is your employees are working too long on something. It’s part of a very large array of potential problems that I find telling.

So what’s the big problem, then?
I think an undue focus on employees is not the problem or solution. The solution is very diligent application across the entire spectrum of bidding for a project and pricing. People don’t know what their employees cost, what an hour of work costs. They estimate time right, but they don’t calculate how much it actually costs.

We just wrote about some research about the hidden cost of freelancers.
First off, when people talk about freelancers versus full-time people, there are two separate sets of people. Look, if you’re hiring the same freelancer over and over again and you’re hiring that person 200 days of the year, it’s totally more expensive to do that than a full-time employee. We found ourselves doing that all the time. We found ourselves hiring Joe over and over again. That’s a problem. Shops are saying, “We’re in a hiring freeze,” or they just don’t let themselves hire the person. Just hire the person.

The other thing is core competency has shifted. Agencies don’t make stuff necessarily. They have a core competency, and then they do other things. So a graphic design job shop is expanding in UX design, but it’s only getting two or three gigs a year for that; it’s obviously going to rely on freelancers. That creates a weird dynamic.

This doesn’t happen in small shops, the financial problem.
If you started your agency and you’re growing your agency, you need people ahead of the work. So you are overworked, then you hire, then you are underworked, then you’re overworked again, and you hire. But if you’re an agency owned by someone, you don’t work that way any more. There’s no owner CEO pinching pennies any more. So it becomes reactive instead of proactive. Small agencies don’t use that freelancer as an economic tool the way the big agencies do.

You spend quite a bit of time talking about culture in the book. Is it a real problem now for agencies, specifically?
I think there are two ways to use culture as a tool. There is the utilitarian: Culture is there to be the boss in the room when you’re not there. But it’s a powerful way to keep people attached to the company in an era where attachment to companies is tenuous. It’s a powerful and cheap tool to keep people wanting to work for you. You don’t actually see a lot of problem in the middle period with companies not having culture. In owned companies, once there is an institution around you, it becomes a lot harder. It’s very easy if you’re 20 people and one leader to make a culture.

Do you think agency people are getting unhappier?
There are interesting pressures going on. Agency people are very empowered in a lot of ways: the pay is still good, there are things to be positive about. But there are things that are negative. For one, social media is not necessarily a creative discipline. It’s so draining. People love making beautiful cinematic TV ads. And they don’t do those any more. So that’s depressing. And they look at the startup world, and there is a higher potential for wealth. There is the envy going on. I don’t think it’s a terrible malaise. But it’s definitely depressing.

That must make attracting people to the agency world hard.
It’s very hard for large traditional shops to get solid engineering talent. Interesting thing about money is, the margins are going to zero, but the pay is good. How can that be true? The money is good in media planning. But there is a pretty big tension in advertising with increased competition and declining margins.

What do you think will happen? Give me a prediction.
OK, but it’ll be boring. It’s what’s kind of happening now. Creative shops starting to do media now. And a parallel thing where the media agencies are doing, which is a lot less successful where they are trying to reattach creative to their offerings. It’ll bring about the eventual reunification of media and creative. It’s inevitable, but it won’t happen soon.

What do you like least about advertising today?
I call it the Comcast problem. Every rational person knows what Comcast should do, but it’s impossible for the company to execute it as it is right now. I’ve occasionally talked about taking consulting jobs for agencies with big clients. Yeah, I could whip up a strategy for you. But doing it is not possible. Everything agencies are doing are winning useless incremental wars. Social has made it more pressing. So agencies are reading terrible comments about their client on Twitter all the time, but the ad side is not empowered in any way. It’s all bandages.

So what happens?
It’s sad that there is this moment where we can have bigger impact, but soon, everything just goes back in-house. Or they give agencies the customer service duties. Which won’t happen. We’re in this big silly world where advertising does some of it and others do some of it and it doesn’t make sense.

Do holding companies make sense any more? Can we go back to an era of standalone shops?
The holding company right now is an amalgamated, consolidated media buying apparatus. But they also own a portfolio of creative companies that don’t make them any money, that are a headache to manage. But they have them for two reasons, for new biz, and for occasional, slow steady incremental growth of revenue. Until something threatens the stability of media and buying planning side, I don’t see it breaking up. It is a hassle to own creative agencies, but it does have a benefit. You can tell clients you’re smart, and you have awards. What I do see is a scenario — not definite or likely — where Wall Street wakes up to the existential threat that social media is applying to the media side of the business. Then, when an analyst writes some dumb article about that, the stock fluctuates, and WPP decides that creative agencies are a distraction and they start divesting.