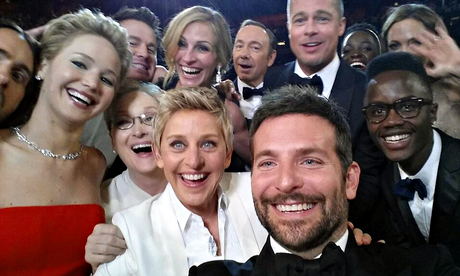 Sometimes brands can actually be pretty innovative. This is not a story about one of those times.

More often than not, big brands play it safe, opting to purvey some of the most tired and outdated social media messaging out there. Case in point: the selfie. From LinkedIn to Tetley Tea, brands have figured out what millennials understood years ago: People like to take pictures of themselves.

Your Selfie Idea is Not Original is a Tumblr by an anonymous ad agency creative that is collecting examples of the worst offenders.

We got the brains behind the operation to explain how this unfortunate habit became a trend — and why that’s a problem.

Why are you doing this?
It’s simple really. Someone just needs to point it out because it’s shit. I didn’t create it for comedy; it’s just that there are streams of creatively bankrupt agencies or creatives that try as little as possible when it comes to creating campaigns or mechanics over social. Thankfully, it’s been picked up quite a bit, and I’m hoping this makes clients and creatives everywhere think twice when they start to sell an “innovative” selfie idea.

How did it become an epidemic?
Because it’s easy and lazy. Unfortunately, we have this trend in advertising and more commonly within social media whereby a person does something, it starts to get big or “viral,” then other people join in and it snowballs into a BuzzFeed, Metro Online or Daily Mail article and ultimately brands try to hijack a “trend” and put their spin on it. But agencies and brands are very rarely nimble or quick enough to create something of value within the timescale — so by the time it’s pushed out, it’s just plain shit. Just have a quick search around things like planking, harlem shake or just memes in general.

But why are you so heated up?
My main problem with brands and selfies is the sheer arrogance of a brand that thinks people have nothing better to do than take a photo of themselves with a logo in it for their chance to win absolutely fuck-all. It does nothing for the person entering, it adds no value to the brand, and finally, it’s actually embarrassing for all parties involved. The way you hear agency folk talk about selfies — like your Dad asking what ‘LOL’ means because he finally got a Facebook account — is just slightly sickening. Because ultimately some poor client is going to pay a day rate for an idea that took five minutes to shape.

Can anyone get it right?
Yes. I’m not trying to defend the “selfie,” but I do think brands need to massively evaluate what their role in conversations are over social media. Oreo Daily Twist has spawned this culture of newsjacking whereby brands think that if they create an image that has a tenuous link to a cultural event, it’ll make them an Internet success. One example could be the Luis Suarez bite at the World Cup. I don’t want to see a brand in my feed tweeting, “Our new range of Accessories have ‘bite’ too” when they have zero credibility in that space. “Does anyone give a flying fuck?”