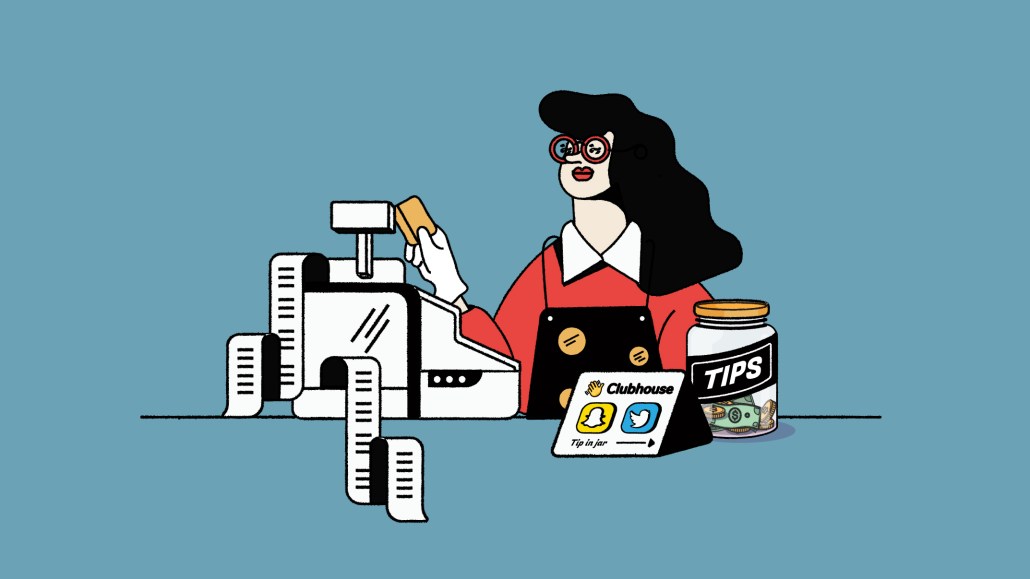 It’s a good time to be a content creator as social media platforms continue to roll out tipping features, creator programs and other monetization efforts for them to make money on their social channels.

It’s why U.K.-based Abraxas Higgins recently left his full-time corporate job to pursue a career as a Clubhouse influencer and social audio strategist.

It wasn’t something Higgins had planned to do, he said. But after gaining a following on the live social audio app, he took the leap. Currently, Higgins is one of the most popular people on the app, with more than 430,000 followers. Higgins said brand partnerships on the channel have become a main source of revenue for him. He declined to say exactly how much he earns but that brands like Ted Baker, Adobe and Amazon Prime Video have approached him for work hosting themed Clubhouse rooms.

While Higgins was able to attract a following without relying on small audience donations — essentially tips — on the platforms, he sees them as a way to support new creators. He considered them a way for platforms to engage creators, attract their audiences, and ultimately, increase user retention rates.

“I think tipping is the best way to start [monetization],” he said. “The best thing you can do is put something in there that’s quite small and voluntary, and let’s see how people behave. You can understand how good that is for a musician or comedy act.”

In April, Clubhouse introduced a donation-based tipping feature known as Payments, where listeners can digitally send money or tip their favorite creators via payment processing software Stripe without leaving the app. Since then, the app has launched a 3-month long creator fund program, offering a $5,000 per month, per show stipend, equipment and training to help creators monetize their work.

Twitter also rolled out a donation-based tipping feature, with its Tip Jar in early May, in which users can tip others through third-party payment services such as Cash App, Patreon, PayPal, Bandcamp or Venmo. And not to be outdone, Snapchat last month announced its Gifting feature where users can purchase Snap Tokens to send a gift and creators earn a share of the revenue. Instagram just launched a three-day summit to help creators monetize on their channels, per previous Digiday reporting.

Per marketers, all the signs point to competition heating up between the platforms to keep users engaged and advertisers paying to access their audiences. As social platforms like TikTok and Clubhouse continue to take up audience market share, titans like Twitter and Snapchat are rolling out competitive features to keep creators happy, they say. Because where there are creators, brands and ad dollars aren’t far behind. And it won’t be long before other platforms offer similar features.

“Ultimately, what the platforms are able to monetize is usage. And the more they can point to usage growth, retention of users and things like daily and monthly active users, those are really the bread and butter that allows them to go to advertisers and sell,” said Noah Mallin, chief strategy officer at IMGN Media. “Having a robust influencer, creator ecosystem helps to make all of that work.”

Marketers and media buyers are keeping an eye on the features for now as these efforts could change the way brands work with influencers.

Mallin predicts a potential outcome where brands look to specifically work with influencers or creators with tipping jars, likening it to a social media blue check verification badge of honor. In another less rosy outcome for marketers, Mallin predicts another revenue source for creators means less dependence on brands and ad dollars.

To put things in perspective, the concept of creator monetization isn’t anything new and can be traced back to at least 2013, when online personalities garnered tips through payment apps like Patreon. The donation platform Buy Me a Coffee launched five years later. Since then, Twitch, YouTube and TikTok have all launched their own in-app take on direct payment options for creators.

However, now the landscape is a bit different — consumers have been communicating on these channels more than ever before after a pandemic kept them at home. And other companies have dabbled in consumers’ affinity to pay for content, such as subscription-based OnlyFans.

Over at the shop Laundry Service, head of the agency Jordan Fox recognizes this history — that tipping features and other monetization efforts aren’t new — but that these new features could demonstrate that the creator ecosystem is maturing, giving creators more revenue options and discretion as to which brands they partner with.

“A lot of creators understand that you only want to really enter into a brand partnership where there’s like a meaningful connection between you and the brand,” he said. “You trust that you’re going to be able to show up authentically as yourself and not have to kind of contort yourself in order to partner with that brand.”

Still, not all content creators are keen on the platforms moving to monetize content via tipping, even fearful that the slew of monetization efforts will have the inverse effect by introducing hard sells.

“Social media was initially supposed to be a place where all of us could share content… and have fun,” said Destiny Yemayá Davis. “But now it’s becoming this place where [there are] celebrities and people who are popular with their followers, and you can pay them. It’s too much.”

Davis is a part-time content creator who uses Instagram and brand sponsorships as her main revenue driver. The Facebook-owned platform introduced a tipping feature via Instagram live videos late last year, which Davis said she’s open to exploring but hasn’t yet.

Davis finds herself spending less time on apps like Instagram (a platform that has become a place for ads and product sales, she said). She’s in favor of creators getting paid via tipping, but cautious of more monetization efforts complicating the user experience.

Ultimately, tipping and monetization isn’t a win or lose situation for brands or creators, per Fox. Instead, he encourages media buyers and the industry as a whole to take a wait-and-see approach, noting healthy competition in the platforms rolling out these features.

“It drives creator-friendly behavior on the part of all the platforms, both the incumbents and the new entrants,” he said. “Because they all want creators on their platform to attract and retain their user base.”