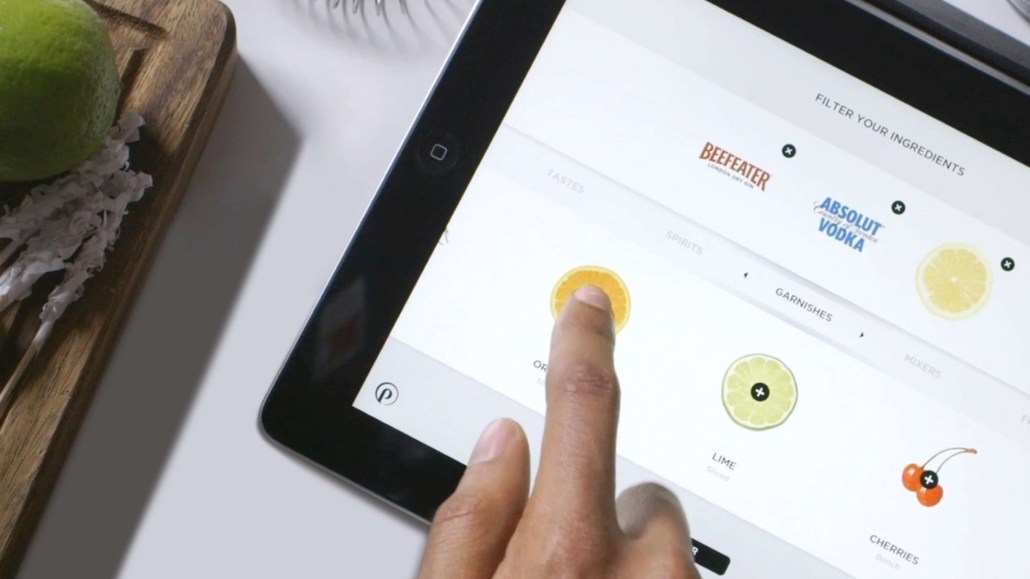 With a supply chain that’s littered with third parties, it’s hard for brands to stay connected with their customers. Wine and spirits company Pernod Ricard is trying to change that by harnessing the internet of things (IoT).

McCahon hired the agency SharpEnd to understand how Pernod Ricard’s spirits brands can take advantage of people’s connected lifestyles. Indeed, worldwide spending on the IoT is expected to grow 16.7 percent year over year in 2017 to just over $800 billion (£603 billion), according to the International Data Corporation.

McCahon is starting by making bets in bars and clubs before venturing into people’s homes via smart assistants and connected home appliances. Her rationale is that it’s these places where “a lot of advocacy happens,” whether it’s a bartender recommending a Jameson cocktail or a customer seeing a friend order a limited-edition Chivas Regal.

Her initial focus is on brand building rather than pushing sales. In China, for example, where the dominance of smartphones has made it an ideal test bed for ideas, Pernod Ricard had success testing “connected” bottles tagged with QR codes that people could scan using their phone to get suggestions of where to go out with friends and Pernod Ricard brands to drink alongside offers that would help make the trip better. Discounts and price-based promotions didn’t work as well, suggesting, McCahon said, that “people want richer experiences.”

China also is the test bed for a chatbot that Pernod Ricard created for WeChat users, called “Ask Jerry.” The virtual barman recommends bars and cocktail recipes for Pernod Ricard brands as well as those of rival brands.

Unlike others that are just now jumping on the IoT bandwagon, Pernod Ricard got there three years ago when it launched its first connected bottle in China. The bottles were made so if customers wanted to check the veracity of a bottle in a store where counterfeit goods are prevalent, they could trace its journey from the distillery to the shelf, as well as get general information on the brand. Within six months, the company started seeing success in terms of the number of times bottles were scanned (though McCahon wouldn’t give specifics) and now plans to roll out connected bottles with individual QR codes across its brands over the coming months.

“Another key learning is that content and [intellectual property] are absolutely primordial around the activations we’re doing around IoT,” said McCahon. “Everyone knows how to target and tap into a consumer, but the question is, do you have that content or engaging experience that they want to pay attention to?”

Pernod Ricard has struggled to make progress because its tests weren’t coordinated across its markets prior to hiring SharpEnd, McCahon said. Moving forward, she hopes a clearer set of objectives and a commitment to test and learn faster puts those issues to rest.

A recent example of this revolved around the Jameson brand’s annual St. Patrick’s Day campaign in Ireland, Pernod Ricard issued limited-edition bottles tagged with QR codes that fans could scan to find out information about St. Patrick’s Day events, which McCahon said generated the company’s highest engagement yet for a connected bottle.

Mindful that Pernod Ricard’s push into connected lifestyles walks a fine line between the advantages of personalization and the concerns for privacy, the team has created a data plan to navigate these concerns. “We don’t want to be Big Brother,” McCahon said. “We are interested in gaining intelligence to feed innovation and who we need to reach, but we draw the line at anything creepy.”