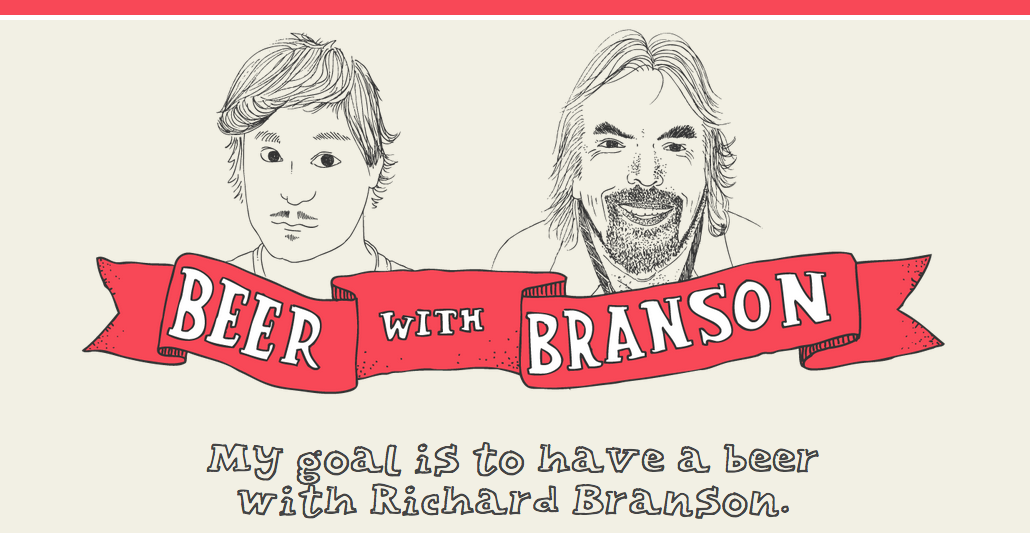 When is a beer more than just a brew? When it’s quaffed in the company of your childhood hero. Just ask young entrepreneur Justin “Bugsy” Sailor, 31, who just this week fulfilled a four-year mission to drink a bud with his idol, Sir Richard Branson.

“It was the best beer I’d had in awhile,” Sailor told Digiday.

It was no doubt made all the tastier for the epic journey it took. The story begins in 2010 when Sailor made it his New Year’s resolution to drink a beer with Branson — a mission he pursued vigorously on Facebook. But 2010 came and went with no such meeting, and Sailor indefinitely shelved his dream of bending an elbow with the eccentric Virgin founder.

But a bit of serendipity earlier this year made Sailor’s dream feel tantalizingly realizable. And this Tuesday, when Sailor and Branson drank craft brews together at the Devos Place community center in Grand Rapids, Mich., it finally came true.

The difference between Sailor’s failure in 2010 and success in 2014 is a case study in shrewd social media marketing (and a little bit of luck).

Sailor first launched his Beer With Branson campaign on Jan. 1, 2010 with a post on a Facebook page he created called, well, Beer With Branson. Beer With Branson operated under the Kevin Bacon principle that people are separated by, at most, only six different human connections. The promise of social media — and Facebook, specifically — was to illuminate a path from Sailor to Branson.

That path proved elusive, however, and Beer With Branson crept to a halt. It wasn’t unusual for Sailor to post twice a day to the Beer With Branson Facebook page during the first nine months of 2010. He posted only four times from October 2010 to early 2014, though.

And then Sailor, a Michigan resident, learned that his hero would be speaking at the Economic Club of Grand Rapids’s annual dinner on May 27. Sailor had long admired Branson’s “screw it, let’s do it” ethos, so he took the advice to hear and revived the campaign.

“I remember being a kid in high school and me and my buddies would joke around about ideas,” said Sailor, a developer at boutique creative agency Elegant Seagulls. “We always have these hypothetical ‘What if?’ questions we ask ourselves, but we so rarely act on them.”

This time Sailor decided not to immediately inundate his friends with Beer With Branson updates. Instead, Sailor waited until early May to start the marketing push. In 2010, the initial reaction to Beers With Branson was exuberant, but the enthusiasm quickly waned, Sailor said. Launching it just weeks before the Economic Club dinner would allow the campaign to grow without losing momentum before the momentous occasion, he thought.

Sailor kicked off the campaign on May 7 with a promoted Facebook post which received 24 shares and 24 likes.

He routinely posted to the Beer With Branson page and did so less frequently on his personal page. He also sent an email to Rob Bliss, a publicity stunt artist and proprietor of a viral video marketing agency. (His agency is responsible for installing a 500 foot waterslide in Grand Rapids and organizing a 10,000 person “zombie walk.”)

Bliss linked to Beer With Branson from his own Facebook wall, which in turn caught the eye of Steve Zaagman, a reporter at Grand Rapids’s ABC affiliate WZZM. Zaagman contacted Sailor about doing a segment on the campaign and also put Sailor in touch with Economic Club executive director Lorna Schultz. Schultz got in touch with Branson’s people, and the answer was a resounding “maybe.”

Sailor, undeterred, showed up to the black tie event anyway, sporting jeans, a t-shirt from his clothing company Yooper Steez, a blazer and a two beers from Michigan microbreweries. Schultz made the introduction.

“Probably not my best pour ever as I was a little nervous,” said Sailor, who asked Branson who he’d most like to have a beer with most.

“A young entrepreneur like yourself,” replied Branson, according to Sailor.

Sir Richard only spoke with Sailor for a few minutes but the brief encounter was the realization of a boyhood dream. And it confirmed to him something he wants all ambitious people to internalize, he said:

“I just want more people to take action on those ‘What if?’ questions.”

Image via Beer With Branson