Music festivals, buffets and nautical parties: How agencies are beating the summer slump 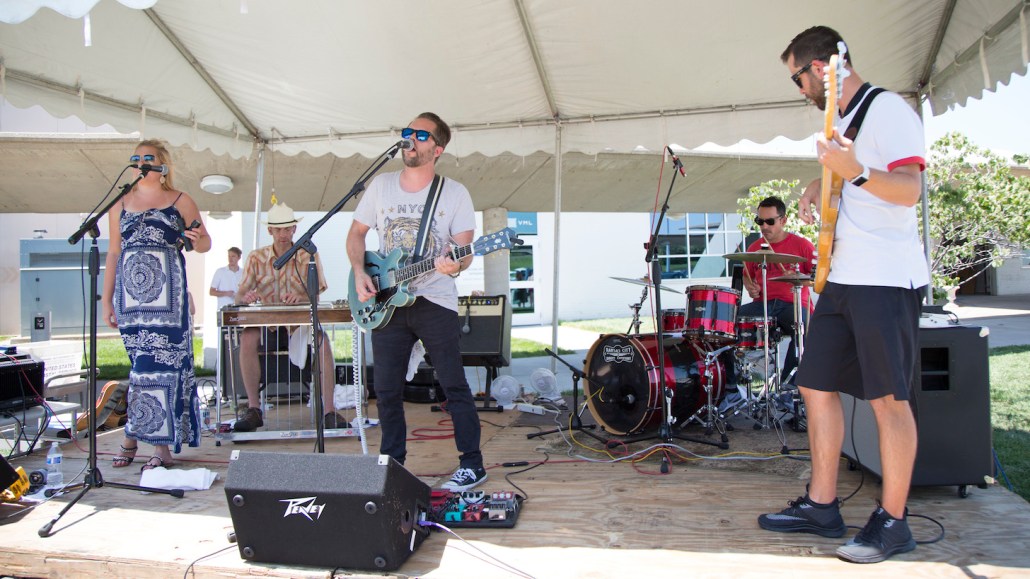 For agency folks, summer is the time of year when work tends to slow down. It’s the season for agencies to disrupt their own workflows to keep their cultures alive and their employees’ creative juices flowing.

This summer, agencies are beating the summer doldrums by hosting events that celebrate the diversity of their employees with food, music and outdoor activities.

VML hosts its own Coachella
Marketing is not the only passion of VML employees. The agency also attracts musicians who often work as DJs or play in bands on the side. Last week, the agency placed its rock stars in the spotlight by hosting its own Coachella event, dubbed “Vmella.” At the Charles B. Wheeler Downtown Airport in Kansas City, Missouri, where VML is headquartered in one of the terminal buildings, the agency set up two stages, where its DJs and band — the 404s — performed for colleagues.

The attractions didn’t stop there. The agency turned the event into a festival with art installations, tie-dye — for which attendees had to bring their own white T-shirts — and food vendors. The agency urged its employees to refrain from scheduling meetings that afternoon unless they were absolutely necessary.

“Vmella, our fun take on Coachella, was designed to celebrate the many musical talents of VMLers,” said Jamie Beard, VML communications manager and the organizer of the event. “The party provided a way for VMLers of every stripe to spend time together and meet others outside of their immediate team. Music is a common language that easily brings people together.”

Fred & Farid’s worldly culinary experience
Independent creative agency Fred & Farid is made up of employees who represent 25 different nationalities and speak 20 languages. To celebrate this diversity and the season, the agency invited all team members to a special lunch on July 21 called “25 Bites Lunch Around the World.” All employees brought a favorite authentic dish from their country of origin to share, swapping meals, stories and cultures.

Fred & Farid also does what it calls its “Happy Mix.” Every Thursday and Friday, a different team member plays whatever music playlist they desire. This helps spread and share music influences, according to Farid Mokart, CEO and founder of Fred & Farid. “We believe diversity makes us more creative and better human beings,” he said. “We learn from our differences, not our similarities.”

360i’s after-work shindigs
Every summer, 360i usually hosts one daylong event, but this summer is different. This year, the agency is putting on five after-hour parties for its employees throughout the summer for its “Summer Series.” The series kicked off at the agency’s New York office in June with a Pride party supporting the LGBTQA community. Decked out in rainbow garb, creatives gathered for pizza and colorful summer cocktails. A few weeks later, the agency held another rooftop cocktail happy hour, this time offsite at the DL in the Lower East Side. For the third event, Hulu will provide an exclusive screening of the upcoming Seth Rogen film “Future Man.” The fourth event will feature barbecue and an agencywide flip cup tournament. The series will culminate with a carnival at 360i’s New York office. Every floor of the building will offer a different food option and carnival activity, such as miniature golf.

Having five separate events ensures everyone will be able to make at least one of the events, said Tiffany Francis, 360i’s chief talent officer. “Everyone should have the chance to kick back and enjoy summer with their colleagues,” she said.

Interbrand gives back
Interbrand participated in an event with America Scores, a nonprofit that uses soccer, poetry and service learning to inspire underserved children to lead healthy lives. On July 8, agency employees played in a soccer tournament and donated $5,000 to the organization. Interbrand also celebrated Pride in June by walking in the annual NYC Pride March along with other Omnicom agencies.

“While the feeling of summer lends itself to hosting certain employee events and programs,” said Lorrie Dougherty, senior director of human resources at Interbrand, “we are committed to providing our employees with opportunities that complement their work experience year-round.”

MediaMonks’ maritime party
Digital production agency MediaMonks knows when to jump ship and have some fun. This summer, the New York team is getting together at The Royal Palms shuffleboard club in Brooklyn for a party with a nautical theme. All employees will dress in boat attire, play shuffleboard and enjoy Jimmy Buffett-inspired cocktails.

“We’re an agency with a strong sense of culture and teamwork,” said Jason Prohaska, managing director at MediaMonks. “We really look out for each other and actually love hanging out with each other, so the boat party’s way more of a real party than your stereotypical office shindig.”