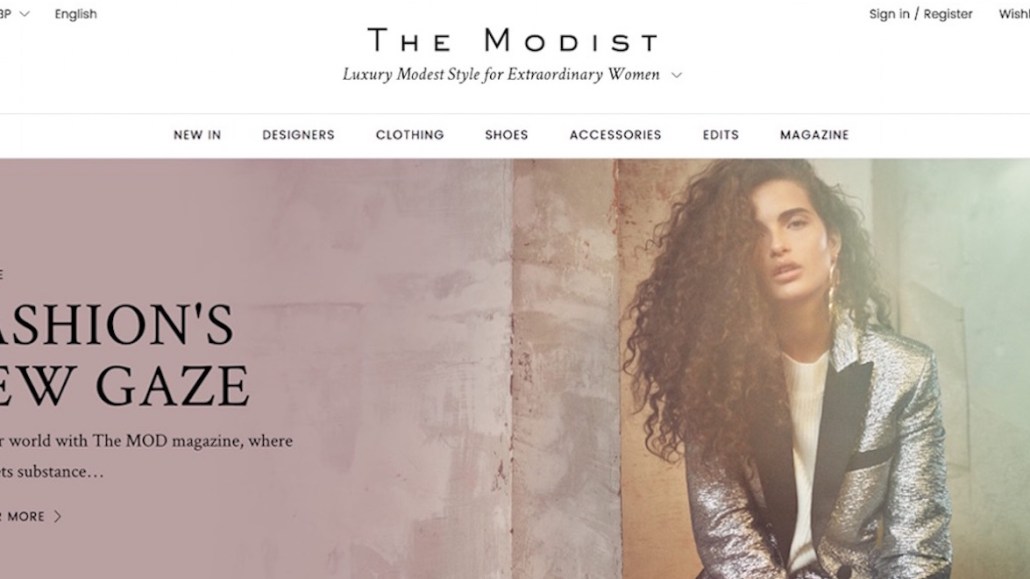 Modist fashion is getting more attention, with niche sites like Modanisa, East Essence and ModLi, but none have garnered the name recognition or luxury appeal of sites like Shopbop and Net-a-Porter. The Modist, which launched on International Women’s Day last month, hopes to change that by rebranding modesty as a style with cross-cultural and designer appeal — and less tied to religious strictures.

Founded by Ghizlan Guenez, a Dubai resident who previously spent 14 years in private equity, the platform features over 75 of the world’s leading brands — including Marni, Alberta Ferretti and Christopher Kane — with a “DNA and aesthetic in line with the modest dresser,” said a rep for the team. In looking at the site, you will find mostly long skirts, pants and dresses, along with long-sleeved and often high-necked tops.

Sourcing from this high-fashion contingent is a first for modest retail, and it’s intended to break down preconceived notions that modest dressing is dowdy or un-chic.

“When a modest consumer is looking for the right outfit, they’re not necessarily checking if the designer purposely had them in mind or not,” said Hassanah El-Yacoubi, a modest-fashion blogger who has written for the Huffington Post. “What matters most is that they find something that doesn’t compromise their modest metric, so the more options, the better.”

As the company sees it, modesty is not simply a religious mandate, but often a personal choice bent on “the desire to be elegant and carefully dressed.” Their target customer is everywhere, they add, from New York to Shanghai to Melbourne, and one who falls anywhere along an age spectrum of 20 to 60.

Katie Smith, a senior retail analyst at Edited, agrees that the interest in modest fashion is growing outside of religious spheres. “This spring, new arrivals of long-sleeved tops and long-length dresses across all markets have grown by 16 percent, compared to a year ago,” she said. “A combination of global political and social movements — compounded by the prevalence of the digital landscape — presents a whole new world for retailers like The Modist [to] play a successful role.”

Avoiding the topic of faith is an unusual angle for a modest fashion site to adopt, but one the market may welcome, anyway. According to Thomson Reuters’ latest report on the State of the Global Islamic Economy, Muslim consumers, who gravitate toward modest styles, spent $266 billion on clothing in 2013 and are on track to spend around $484 billion by 2019. By comparison, U.S. consumers spent $395 billion on clothes in 2013.

These are striking numbers, though less so when viewed alongside a recent Pew Research Center report that predicts the Muslim population will grow from 1.6 billion to nearly 3 billion by 2050, faster than any other religious group.

Guenez has gathered a particularly impressive team to help bring this vision to life. Two members come from Net-a-Porter, including the company’s former global sales and marketing director, Lisa Bridgett, who is The Modist’s chief operating officer, and its former global buying director, Sasha Sarokin, who serves as buying and fashion director. Creative director Sally Matthews comes from Harper’s Bazaar Arabia, where she worked as fashion and beauty director.

The site itself reflects their combined expertise, with its clean, elevated layout and trend-driven shoppable content, including interviews and editorial spreads shot in-house on the level of any top fashion magazine or website. These features live on their digital magazine, The Mod, a monthly endeavor reminiscent of Net-a-Porter’s The Edit.

“The Mod is the voice of our woman [and] will carry stories of women who inspire through substance and beauty,” said the rep. “It’s always uplifting and acknowledging the power and intrinsic beauty of [being] a woman.” That focus is in step with the larger trend of fashion brands embracing and relying on feminism to endear themselves to consumers, a facet that may be key to The Modist’s ability to court a wide range of consumers.