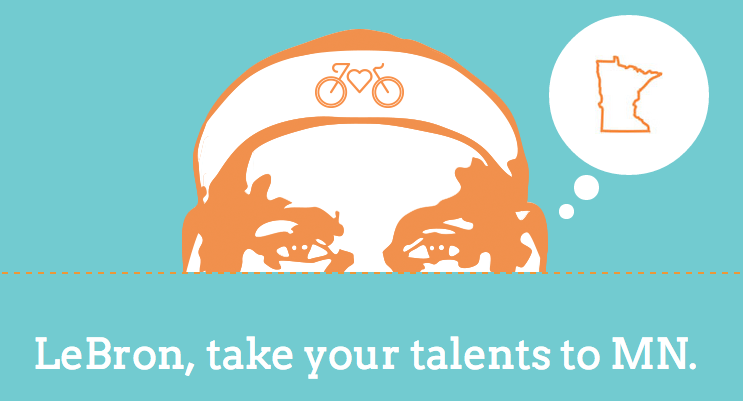 Who needs all-star rosters when you have bike trails? Minnesota’s Pedal MN, a coalition of state agencies and private organizations that promote bicycling, is trying to tempt former Miami Heat forward LeBron James to sign with the Timberwolves when the four-time MVP makes his free agent decision.

James is a bike aficionado: He has said he often bikes to and from Heat home games to stay in shape (not for the environment or fun.)

Created by Colle+McVoy, the campaign can be found at TheDecision2014.com (the name of the site is a play on the name of James’ over-the-top television special in 2010 when he announced he was signing with The Heat), where @PedalMN is tempting the King with offers to mark bike paths to get him to the Target Center by game time, or showing off the Paul Bunyan statue that might be perfect to for him to dunk on.

The idea came about when a Colle+McVoy art director, David Kelly, was watching ESPN and noticing how much airtime was devoted to James’ decision. He put together a quick presentation for Pedal MN. Some tweets were crafted, but others respond in real-time to the conversation — if max salary caps are mentioned, @PedalMN will play off that and talk about max bike trails.

According to the agency, average impressions per tweet since the campaign began are up 37 percent, while average engagement per tweet is up 28 percent.

There is no word on when James plans to make his decision, although the player did say he was planning to fly to Brazil to watch the FIFA World Cup Final Sunday, so the decision could be imminent.

As such, Minnesota has a bit of competition. Cleveland — burned after his decision to leave for Miami — has launched its own grassroots effort. Come Home LeBron was co-founded by commercial real estate broker Josh Raggi (along with the guy who famously stormed the court in 2013 wearing a “We Miss You” shirt). The site features a somewhat persuasive argument about the “economics” of the NBA and why LeBron doesn’t need to stay with Miami. On Twitter, rumors about James’ plans — as well as some super intense speculation — are retweeted.

As of press time, Digiday couldn’t find any campaigns to get LeBron James to stay in Miami.