Millennial pink: A timeline for the color that refuses to fade 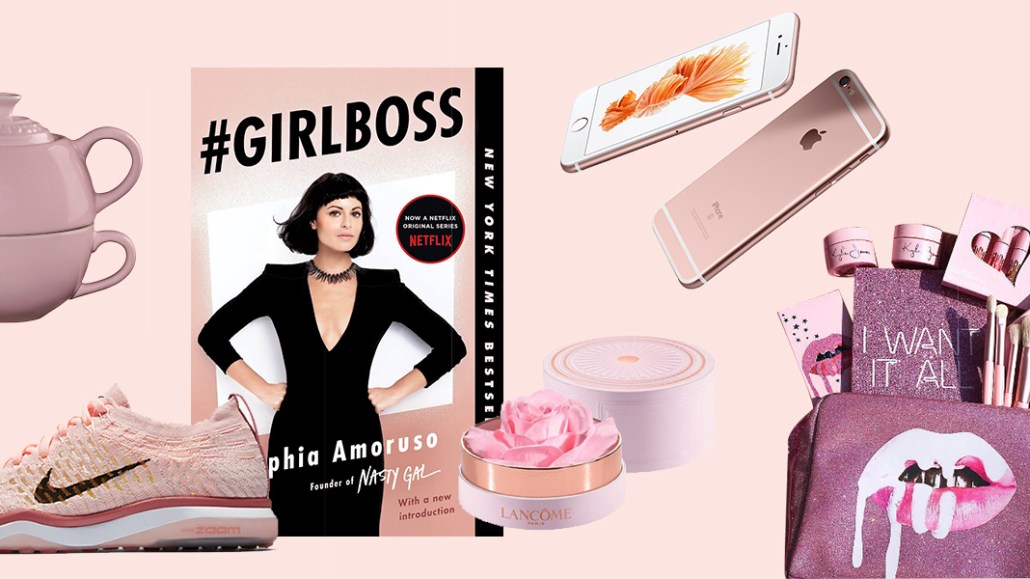 If there’s any color that has taken millennials by storm, it’s the one they’ve claimed for themselves. “Millennial pink” is on clothes, food, cosmetics and even home decor and automobiles. Softer than bubble-gum and bolder than pastel, the hue has been mentioned over 32,000 times online this year, according to Brandwatch data. But while the term “millennial pink” may have been coined around 2016, the color itself isn’t entirely new. Here’s a timeline of its evolution from 1950s housewife to gender-neutral embrace.

1950s: Pastel pink home appliances are in style with brands like General Electric and the now-defunct Kelvinator selling all-pink appliances, from refrigerator to toaster.

1957: Brands begin marketing pink to girls and blue to boys. Lionel Trains sells a pink toy train, but it was a bust because girls wanted trains that looked realistic.

Fall 1991: Susan G. Komen Breast Cancer Foundation hands out pink ribbons to participants in its Race for the Cure for the first time. Since then, the pink ribbon has become synonymous with breast cancer awareness.

2003: Paris Hilton introduces a pink lifestyle on her show “The Simple Life.”

2005: Fashion designer Paul Smith opens a neon pink store in Los Angeles. Today, the building is the backdrop for countless photo shoots and is one of the most Instagrammed walls in LA.

June 2013: Duchess of Cambridge Kate Middleton gets attention for wearing a light pink Alexander McQueen coat at the annual “Trooping the Colour” ceremony in Britain.

January 2014: “Scandinavian Pink” becomes popular on Pinterest, helped by Scandinavian designers like Normann Copenhagen. “We believe in monochrome styling and pink as one of the leading trends in interior and design for 2017,” reads Copenhagen’s website.

December 2014: #palepink becomes the most popular pink-related tag on Tumblr. Users share about the color so often that it starts being referred to as “Tumblr Pink.”

June 2015: The Tate Modern in London has a retrospective on American painter Agnes Martin, whose work features soft pinks and blues. The traveling exhibit becomes part of the inspiration for Pantone’s 2016 Colors of the Year.

December 2015: Pantone selects Rose Quartz as the color of 2016, along with Serenity blue. Leatrice Eiseman, executive director of Pantone Color Institute, said the color represents “a balance of strength and softness. People want to show they are strong, but also loving.”

July 2015: Drake releases his “Hotline Bling” album, upon which the white text “1-800-HOTLINEBLING” appears against a mellow pink.

Feb. 11, 2016: Models’ nails at New York Fashion Week sport a light shade of pink. Alexander Wang requested the color for his runway models himself, according to W magazine.

September 2016: The all-pink restaurant Pietro NoLita opens in New York City with T-shirts and mugs that read “Pink as Fuck” to match the décor.

Sept. 28, 2016: Rihanna features a male model in a pink satin boiler suit for her collection with Fenty and Puma at Paris Fashion Week. It sells out.

December 2016: Beauty brand Glossier opens its first retail store in the brand’s signature pale pink. The color aims to separate the color pink from femininity and make it more gender-neutral, writes the brand in a blog post.

January 2017: At Paris Fashion Week, nearly every designer includes a baby pink piece in their collections such as Chanel’s pink tweed suit.

April 22, 2017: Nielsen finds that sales of rosé are growing at rates “unheard of” compared to other categories of wine. In April alone, the $207 million category grew by 70 percent.

May 1, 2017: Actress Zoë Kravitz wears an off-the-shoulder Oscar de la Renta dress in millennial pink to the Met Gala, resulting in 1,800 social mentions, according to Brandwatch.

Summer 2017: Flamingos become the “kale of style,” with brands like Nordstrom, Crate & Barrel and Kate Spade featuring the bird.