Journey to Middle-Earth With Google 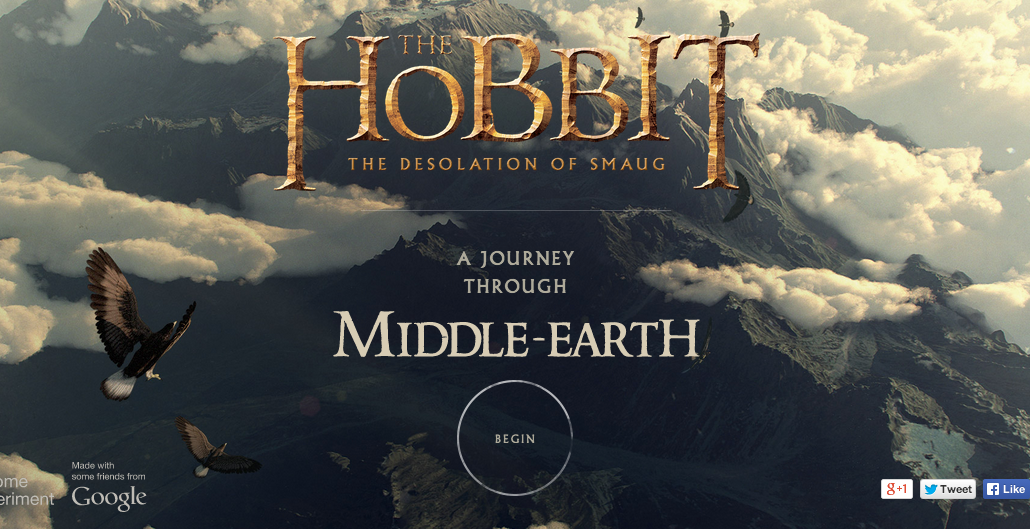 Get your hobbit on with Google’s latest Chrome Experiment.

In advance of the theatrical release of “The Hobbit: The Desolation of Smaug” on Dec. 13, Google has created a Chrome Experiment that lets Tolkien fans enter the world of Middle-Earth. The interactive Chrome Experiment called “A Journey through Middle-earth,” is an adventure game of sorts that lets users explore various locations of Middle-Earth and encounter some of its characters. Users can click on different locations to learn about the history of that place: explore the crannies of Trollshaw Forest or the valleys of Rivendell, and they can try out different survival challenges.

When it comes to movies and TV shows that involve fantasy worlds — especially those with large, incredibly enthusiastic fan-bases — there is a rich opportunity to create online experiences that provide a way to enter those fantasy worlds. For example, last April HBO created a “Join the Realm” site for “Game of Thrones” fans to create their own houses and sigils; and Harry Potter fans got a fun treat in July when Google and Warner Bros. brought Diagon Alley to Google Street View.

The interactive experience was built with the help of digital creative agency North Kingdom and in collaboration with Warner Bros, New Line Cinema and Metro-Goldwyn-Mayer. It’s the first Chrome Experiment to bring this kind of 3D experience to mobile. “A Journey through Middle-Earth” works in Chrome for Android mobile and tablet devices. Most of the experience works on iPhones and iPads, but not all of it. More locations will become available in the coming weeks. And, as with any online experience, just watch out for trolls.