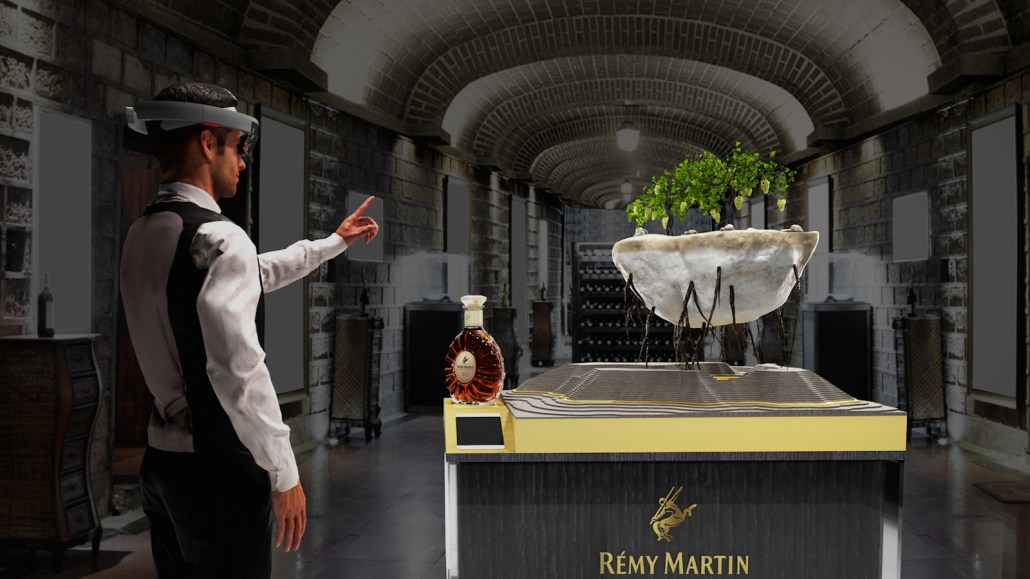 Although its application programming interface has been open to developers since March 2016, Microsoft’s HoloLens, a mixed-reality headset, has not received the same attention from brands as Apple’s ARKit, which brands were quick to apply when it came out in September. The reason: The average person can’t afford HoloLens’ hefty $3,000 price tag, whereas anyone with an iPhone can download Apple’s new AR apps.

All brands haven’t been deterred from incorporating HoloLens, though, with Microsoft creating its Mixed Reality Partner Program in July due to growing demand. In the past few months, luxury alcohol brands, car brands and airlines have used the technology to either tell the story behind their products or design new ones.

Luxury Scotch whisky brand The Macallan developed a mixed-reality app for HoloLens to enhance its “Gallery 12″ art exhibit, which debuted on Oct. 17 in New York City. Guests can use HoloLens to learn the history of two of the brand’s 12-year-old whiskies — Sherry Oak and Double Cask — and the origins of their flavors as they view whisky-inspired art pieces. Users can see the American and European oak forests where the whiskies originated with HoloLens. After New York, the experience will move to Miami, Chicago, Houston and San Francisco, concluding at the end of October.

Raul Gonzalez, vp of marketing and business Development at The Macallan, said the brand added HoloLens to “Gallery 12” as a “fun way for drinkers to learn about and enjoy both 12-year-old whiskies.” He said the app took a year to create.

The Macallan doesn’t expect people to purchase HoloLens after the exhibit ends. To make “Gallery 12” more accessible, The Macallan replicated the experience using Apple’s ARKit, Gonzalez said. The brand said it’s likely that it will use HoloLens to showcase future interactive art pieces.

In June, spirits company Rémy Martin introduced its “Rooted in Exception” mixed-reality app for HoloLens. The app, created with European HoloLens development studio Kazendi, educates users about how Rémy Martin’s Cognac Fine Champagne is created. Users can move virtual vineyards that appear in front of them. The brand is setting up HoloLens headsets at luxury retail stores and events at various locations around the world.

Car brands like Volkswagen, Volvo, Renault and Audi have experimented with HoloLens, but Ford is the first to make a global push, announcing at the end of September that it would roll out a new global test with the technology after piloting it for the past year. Ford engineers and designers are using HoloLens to create car prototypes, overlaying 3-D holograms onto real cars so that designers can see how a design might look from 360 degrees — a faster approach than the clay models they usually work with.

“When developing a computer-designed part or crafting a full-size clay model, it could take days or weeks to finally look at what the designer wanted to see,” writes Jim Holland, vp of vehicle components and systems at Ford, in a post on Medium. Using HoloLens, the entire process takes a few hours, he explains in the post. Although Ford consumers won’t directly experience this application of HoloLens, Holland writes that the brand is using the technology to identify problems that people want solved.

Air New Zealand announced in May that it is beta testing HoloLens for its flight attendants. A flight attendant wearing a HoloLens headset would be able to view information about customers that would appear next to them, such as their flight details, what they have ordered on board and their emotional state. “This is about enhancing the customer experience using technology to provide more information for our crew in order to understand our customers’ needs better,” said Leeanne Langridge, Air New Zealand’s gm of cabin crew.

Other airlines have used HoloLens headsets in the past year as well. Japan Airlines, for instance, is using HoloLens to train its mechanics and flight crew.