Messaging app Line is bringing its retail stores to America 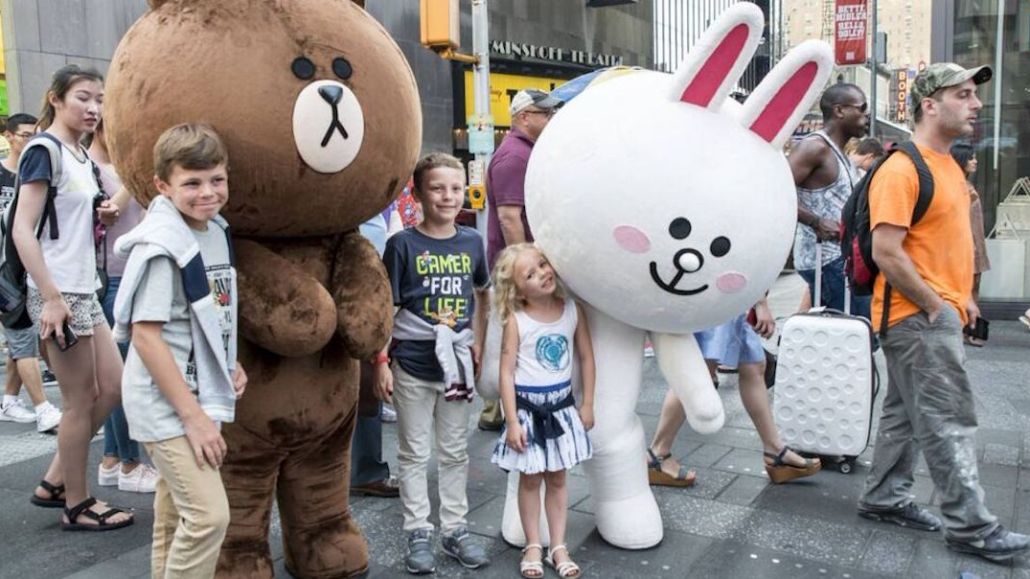 On Tuesday morning, people waited in line to get into the Line Friends store in Times Square in New York City. There, visitors were greeted by a larger-than-life-size emotionless stuffed bear and an exuberant rabbit.

This was the scene at the first U.S. store opened by Line, which is known as the hottest messaging app in Japan. The 4,628-square-foot space contains toys, cushions, stationery and other items featuring the bear, the rabbit and their cartoon compatriots, like a bright-yellow chicken. People can purchase an iPhone case for $25, a luggage tag for $13 and a coin bank for $23, for instance.

Visitors who use Line often would know the characters in the store appear on popular stickers within Line messenger: The bear is named Brown, and he has a sister, Choco, and a rabbit girlfriend called Cony; the chicken, Sally, is a third wheel with a crush on Brown. For most U.S. consumers who don’t use Line for messaging, however, the storyline and those characters’ personalities lose their importance. But the lack of knowledge about the Line app doesn’t prevent people from making a purchase at Line Friends, said James Kim, CEO of Line Friends and chief creative officer for Line Corporation.

“We know that Line messenger is not as popular here [as in Asia], but people don’t need to know the names of Line characters to fall in love with them and further know our brand,” said Kim at the store’s grand opening event. “I think it’s because we are not just a merchandising company — we offer great in-store experience. For instance, visitors can feel, touch and take pictures with mega Brown, and they feel happy.”

Kim added that in 2015, Line Friends opened a store in Hong Kong, where WeChat was a more popular messaging app, yet there was a great demand for Line Friends merchandise. In mainland China, where Line messaging is blocked, the company has six retail spaces (a mix of Line Friends stores and cafes). Kim hopes this business model will also work in the U.S.

“We plan to succeed in countries where our messaging app is not successful,” said Kim. “New York City is a great test bed for our global expansion. We opened a pop-up store here during Christmas in 2015, and it was well-received.”

Perhaps it’s not hard to understand why Line Friends stores appeal to demographics that don’t use the Line app. The stores’ setup and characters of different colors and designs make great props for Instagram photos, as shoppers at the Times Square location demonstrated on Tuesday.

This year, Line Friends will also introduce Brown- and Cony-themed smart speakers and a virtual assistant. “The Times Square store is a good way to test out what our consumers like, which can help us introduce artificial intelligence and smart speakers for our character line going forward,” said Kim.