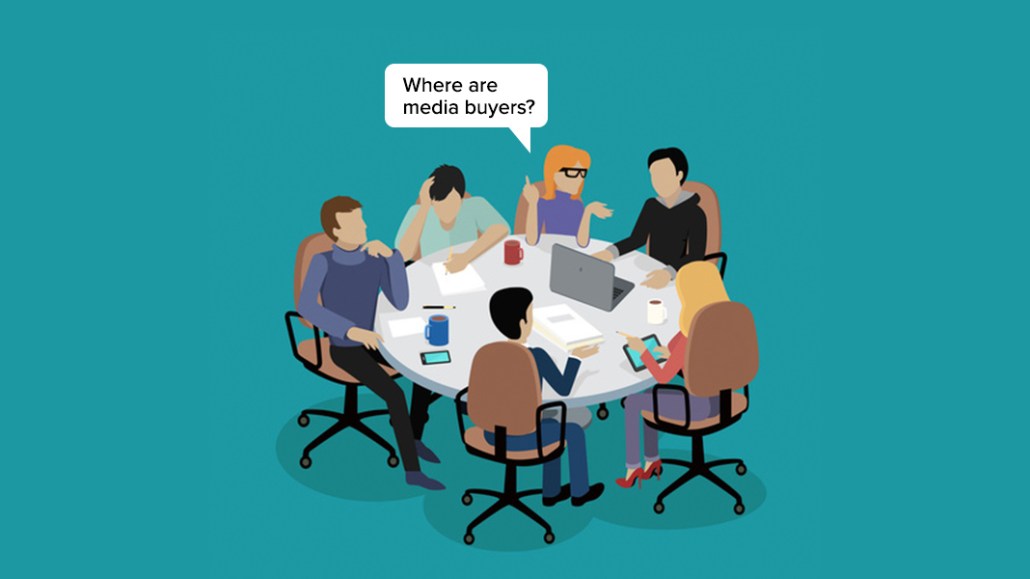 On a recent Wednesday morning, around a dozen reporters, agency and ad tech executives gathered at a roundtable hosted by ad tech firm InMobi at the Interactive Advertising Bureau’s Ad Lab in New York City. One of the attendees, Jason Cooper, gm of mobile for Integral Ad Science, brought up a challenge in setting up industry standards around measurement and transparency: the lack of representation from the buy side — especially media agencies — in discussions like these.

Other speakers agreed. “We are the only buy-side representation at the IAB video-steering committee,” said Michael Tuminello, vp of solutions and partnerships for video marketing platform Innovid. “In my experience, agencies have not been historically participating at even close to the same level as publishers and vendors. It’s a demographic problem.”

The IAB and the IAB Tech Lab said that any member is welcome to any working group, committee or commit group if they volunteer. But media shops are missing in most of those discussions on various marketing topics, according to the IAB and the IAB Tech Lab members, even though many are members of those associations and control the media budget for their brand clients.

In addition, over 120 IAB members are on a regular email distribution list for the mobile rich media ad interface definitions working group, but only one is from the agency side, according to Cooper.

“We always try to get buy-side access, but the buy side is typically represented by demand-side platforms, not by agencies directly,” said an ad tech executive who is on the IAB Tech Lab’s OpenRTB commit group that is made up of the likes of Google and DataXu, and working on OpenRTB 3.0 and ads.txt. “Media agencies are invited and are occasionally involved in the working groups, but generally due to the more technical nature of these conversations, they are less engaged.”

Cooper and others cited a lack of technical knowledge on the agency side as an explanation for its absence in the process but agreed that change is happening.

“Frankly, there haven’t been lots of agency people who are programmatic-knowledgeable enough to go into the weeds, but it is changing now,” said Jon Mansell, vp of marketplace innovation for Magna Global. “Every holding group today is aggressively hiring programmatic talent from tech companies.”

“Because of a lack of buyer representation on these calls, there was no opportunity for them to advocate for things that would aid transparency,” said Cooper. This is changing with one IAB Tech Lab group that’s working on an open-source verification software development kit that standardizes in-app viewability measurement, he said. Buyers are encouraged to join the group and can shape the direction of the product. GroupM is a participant, for example, he said.

Mansell presented a tactic ID solution (which shows what marketing tactic — mobile or desktop, for instance — is responsible for a bid response) at the IAB Tech Lab that was added to the final OpenRTB 2.5 specification. He said he knows that tactic ID would be helpful for supply-side platforms and publishers because he has work experience at ad exchange PubMatic. Such a presentation at the IAB Tech Lab doesn’t happen often on the agency side, he said. “That was unusual — I had to be very proactive to get that done,” he said.

Tuminello also thinks technical standards — typically put in place by tech companies — end up directly influencing what agencies and advertisers can do and what kind of information they can access, so media agencies need to be more active in discussions to set industry standards.

Currently, for instance, the bidding information on the buy side stops at the DSP. It never reaches verification partners or ad servers that are in the best position to defend the buyer’s interest, unless additional arrangements are made beyond the standard OpenRTB-governed transmission of data, according to Tuminello. If media buyers were involved in OpenRTB discussions, they could push for that change.

“Agencies have plenty of talent, but they just haven’t had people that far in the weeds on the tech side,” he said. “Honestly, we see it as a big part of our job to represent them so they don’t have to do it, but they should be more interested in understanding the details and wielding influence.”