The confusing case of McDonald’s 365black.com 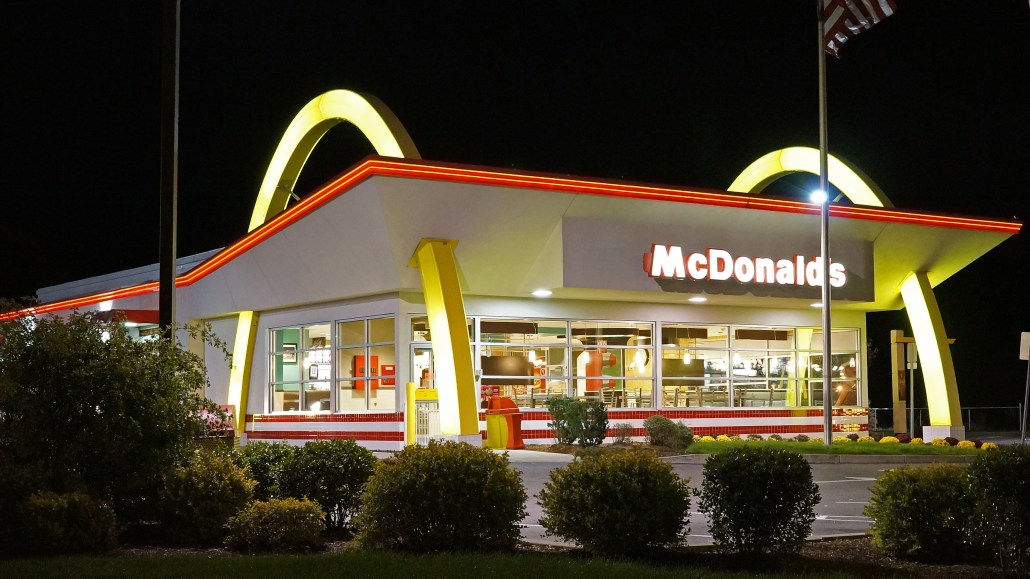 During last weekend’s Oscars, McDonald’s aired a commercial featuring a black male professional entering his apartment building with two McDonald’s bags. He ends up giving one to the doorman after chatting to him about what he was studying — turns out he’s an ambitious student too and not just a doorman. That spot then pushes viewers to the website 365black.com.

If you didn’t know it it actually exists and is an official McDonald’s site, you’d probably think a branded site called “365 Black” was some kind of practical joke or satirical spoof — you wouldn’t be alone. But 365black.com does really exist and it really is an official McDonald’s site that’s quietly been around since 2003 as part of its overall “365 Black” initiative. The fast-food chain created the campaign in order to support black culture and community all year round — hence the name — instead of just one month a year during Black History Month in February.

The problem with the TV spot pushing people to 365black.com this Sunday was that clearly most people didn’t know context of the 365 Black initiative. Judging by the chatter on Twitter following the commercial during the Oscars, people — both black and white — were confused, baffled and upset with McDonald’s having a site specifically targeting black people. 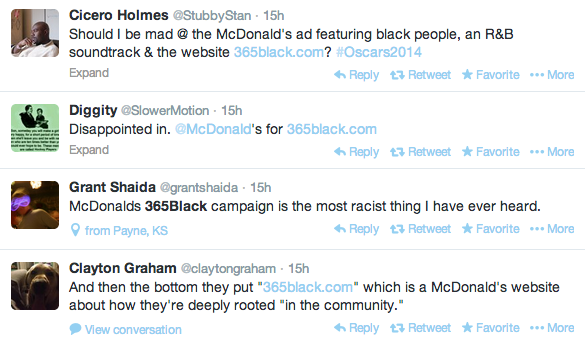 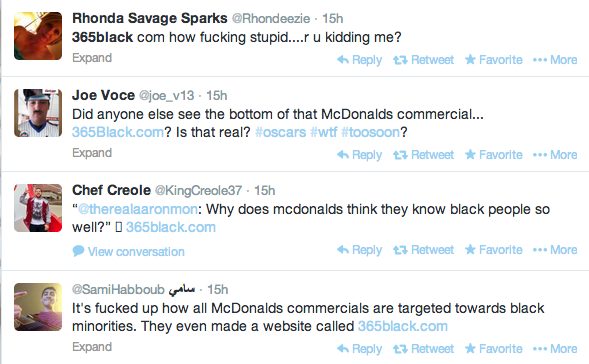 Race is still a delicate issue today, and without previously knowing about the 365 Black initiative and its support of black culture and history, it is understandable that some people who are just seeing an McDonald’s ad with a seemingly random website name slapped on to it might see this as targeted marketing to the black community gone wrong — as those on Twitter expressed. And even before the Twitter reaction this weekend, people have voiced their concerns over the years about the 365 Black campaign being inappropriate, insincere and  racist. However, as Jeffrey Bowman, leader of Ogilvy’s cross-cultural marketing practice, sees it, the Twitter audience tends to be younger and reactive so those reactions aren’t surprising to him. Bowman doesn’t see the site or campaign as being racist or separatist at all,  but quite the contrary.

“365 black isn’t only for one group, it’s celebrating black history year round,” said Bowman. “That’s a total market approach — it’s for anybody that’s attracted to black culture, that doesn’t just have to be for black people.”

Still, it is hard for some not feel queasy about a site called “365 Black” created by a corporation like McDonald’s, which has been criticized, along with other fast-food brands, for contributing to childhood obesity.

“McDonald’s direct marketing to African Americans has always troubled me, largely because so many African Americans live in urban areas surrounded by fast food restaurants and with limited access to fresh produce and unprocessed food,” said Imani Perry, professor at Princeton University’s Center for African American Studies. “It seemed to add insult to injury to present this business as having any investment or interest in African American history and culture.”

Digiday reached out to McDonald’s to ask the company about the negative reactions on Twitter to the 365black.com site. McDonald’s U.S. marketing director Rob Jackson offered the following statement via email:

It is never our intent to offend anyone. We know that many of our customers enjoy an interaction with our brand that goes beyond mcdonalds.com. That is why we offer people with diverse interests an opportunity to interact with our brand in ways that may be different from how others experience McDonald’s…We respect that there are differing opinions. As a company, we’re proud of our long history of diversity and inclusion as evidenced by McDonald’s restaurant staff, owner/operators, suppliers and corporate employees.

Traditionally, as Bowman explained, brands have only had two business verticals to consider when marketing: the general market and the multicultural market. But today the general population in the U.S. is increasingly multicultural.

“We have to retrain the industry,” said Bowman. “Rather than segment general market from multicultural, we have to think of things cross-culturally, because what that does is it allows you to understand that people are attracted to similar and also dissimilar things, and then you can segment based on cultural nuances.”

As Bowman sees it, McDonald’s made a bold move by airing the ad pushing people the 365black.com during the Oscars, giving the site and the initiative a broader media push. However, not everyone is convinced that the 365 Black campaign is really a modern, cross-cultural marketing strategy.

“I think [McDonald’s’] current marketing strategy is old fashioned and will likely evolve to present inclusive rather than targeted imagery,” said Perry. “But either way, the product itself — unhealthy fast food — does particular damage to black communities and should be treated with skepticism no matter how it is presented.”