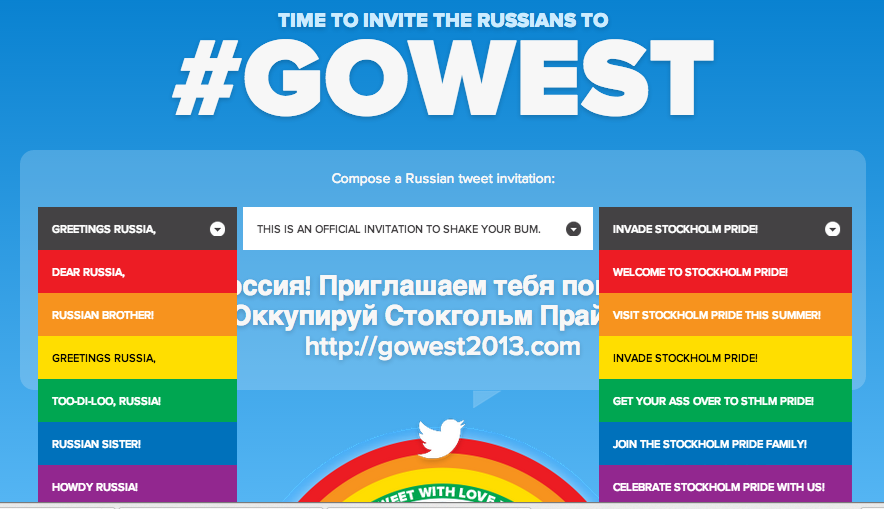 Last summer, Russian courts banned gay pride parades in Moscow for the next 100 years, proclaiming that the issue would not be revisited until at least  2112. Agency M&C Saatchi doesn’t want to wait that long.

Back in June, the agency created a virtual gay pride parade through the streets of Russia to protest the 100-year ban. In a continued show of support for gay rights in in that country, M&C Saatchi’s created #GoWest, a special site that helps people write and translate tweets inviting Russians to Stockholm to participate in Stockholm’s gay pride parade, which took place last month.

Users could choose from several salutations and variations of the message inviting the people of Russia to come to Stockholm to celebrate gay pride. The neat part of the site is that would transform the tweets into Russian and would post the tweets as coming from different cities in Russia in order to make #GoWest a trending topic in Russia to raise awareness.

“We are very proud to be part of something that started with a spark and has prompted a rise in the global support of the LGBT community, making it a global trending topic with celebrities and other influencers engaging in the conversation to push Russia to reverse its stance on gay pride,” said Martin Cedergren, executive creative director and partner at M&C Saatchi Stockholm.

According to Cedergren, the #gowest initiative garnered 86 million impressions and an engagement rate of 6 percent worldwide. Cedergren said that M&C Saatchi will continue to support the fight for LGBT rights and currently has other gay-pride projects in the works.

Watch the video below to get a better idea of the #GoWest campaign: