How luxury brands are co-opting the streetwear market 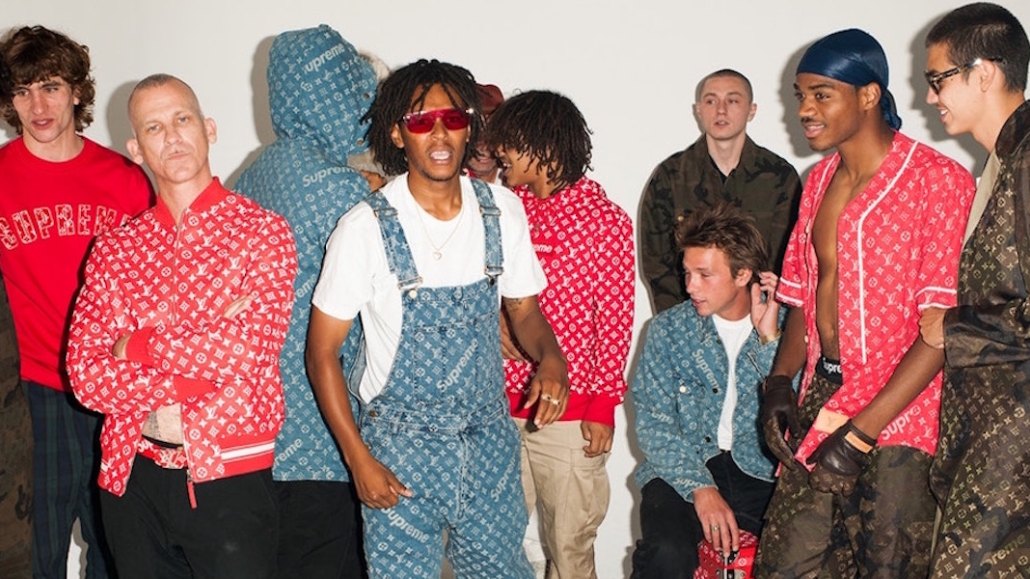 The lines between luxury and streetwear fashion have never been so blurred.

When the private equity firm The Carlyle Group bought a 50 percent stake in Supreme earlier this month, valuing the company at a whopping $1 billion, it was the icing on a cake that was already in the oven for a while.

Supreme first signaled its warming up to the luxury sector in January when it collaborated with Louis Vuitton on a limited-edition collection of accessories that debuted at the French house’s fall 2017 menswear show. Evidently, the disparate brands had brushed aside their prior beef, ignited back in 2000 when Supreme sold a skateboard deck featuring a riff on the Louis Vuitton monogram.

In April, Jil Sander announced that Luke and Lucie Meier would be the new creative directors behind the brand. Though not unusual on the surface, it was a subtle endorsement by the brand of streetwear prowess: Luke is the former head of design at Supreme and the founder of the streetwear label OAMC.

Then, last month, Ralph Lauren re-released its cult-loved Polo 1992 Stadium collection, which included hoodies and T-shirts with the famous “P-Wing” logo. As GQ pointed out, the original pieces had become so sought after in the menswear market, they were selling into the mid-thousands. To capitalize on that hype, the re-release was only available in limited quantities, at certain locations that required ticketed access.

According to Brian Trunzo, a brand consultant and the co-founder of famed, New York City-based menswear shop Carson Street, it read as an effort to regain some cachet with the younger crowd Ralph Lauren has lost over the years, as young consumers have retired their sleek, preppy polos for urban athletic-wear. “The company is finally reimagining ways to reach consumers,” he said.

The frenzy mimicked the drop model that was first imagined in the early 1990s by Japanese streetwear brands like Goodenough and A Bathing Ape. The recurring limited-product release system, which operates outside of the traditional sales seasons, was first brought and honed stateside by Supreme.

It’s now used by everyone from Nike to Kylie Jenner — and Claire Waight Keller, the new creative director of Givenchy, is taking notes. She told The New York Times in September that she plans to release monthly capsule collection drops while at the helm.

As for why luxury brands might be adopting the model, it’s likely the result of  “their sales channels being tapped out and boring,” said Ashwin Deshmukh, the director of insights at the digital agency Hungry. “There’s no really great creative coming out of any of the big houses, so they’re using the drop model to create artificial scarcity and regain excitement.”

Indeed, as wholesale retail suffers from the digital onslaught and traditional marketing fails to connect with today’s consumers, luxury brands have been struggling. Last year, the global market for personal luxury goods failed to grow for the first time since the financial crisis, plateauing at $293 billion.

But it’s not just streetwear’s sales tactics or brand affiliations that these older brands are relying on, said Adam Wray, a senior editor at the marketplace Ssense. What’s more, they’ve been adopting the genre’s design aesthetic for years. “Brands are elevating simple items like T-shirts to coveted status and using more of the playful, referential graphics that are typical of streetwear,” he said, pointing to Givenchy’s $550 Rottweiler tees from 2014 and Gucci’s recent use of Donald Duck imagery on T-shirts and hoodies as examples.

Newer luxury designers, like Demna Gvasalia of the buzzy Vetements, have a different design perspective altogether that could be spreading to the more traditional brands, too, said Wray. This cohort is more focused than their successors on producing every item that comes down the runway, he argued: “We’ve gotten used to seeing runway shows featuring lots of [impractical] clothing that’s never produced, but designers like Gvasalia are rejecting that mode of working.” Instead, he said, “what you see on a luxury brand’s runway today is more likely to be seen on the street, as well.” Given Gvasalia’s other perch as the creative director of Balenciaga, it’s easy to see how that mindset might be leaking into the fashion establishment.

Industry figures are split over whether or not these streetwear-influenced efforts by luxury brands are a good thing.

In the supporting camp, it’s thought to be the inevitable result of older brands finally taking note of shifting consumer desires. “I think it’s been a long time coming,” said Trunzo. “By operating like this, brands can create more dynamic relationships with their customers.”

And rather than dilute the underground, niche nature of the streetwear scene, he added, it’s giving that scene some much-deserved validation: “Streetwear now has a seat at the table.”

Jey Perie, the creative director of the Brooklyn streetwear emporium Kinfolk, is less convinced of any merits. “The problem I have right now with luxury brands tapping into streetwear is that they lack authenticity,” he said, citing brands who reference skate culture or, as was recently the case with Gucci, hip-hop on the runways without any real affiliation to those worlds. “Authenticity and lifestyle are the core of streetwear. That’s why we exist, and it can’t be borrowed.”

Deshmukh agreed, noting that luxury brands lack the organic, enthusiastic culture that many streetwear brands are built on. One recent example that came to mind? A collaboration drop between the streetwear shop The Good Company and Reebok, during which Frank Ocean showed up, unannounced and unplanned, and went around chatting with attendees. Louis Vuitton, on the other hand, would probably go the route of paying Ocean to perform at a drop just to draw a crowd, he said.

“I find the trend insulting,” he continued. “They’re doing the same thing they always do, which is to find cultural artifacts or movements and co-opt them as their own.”