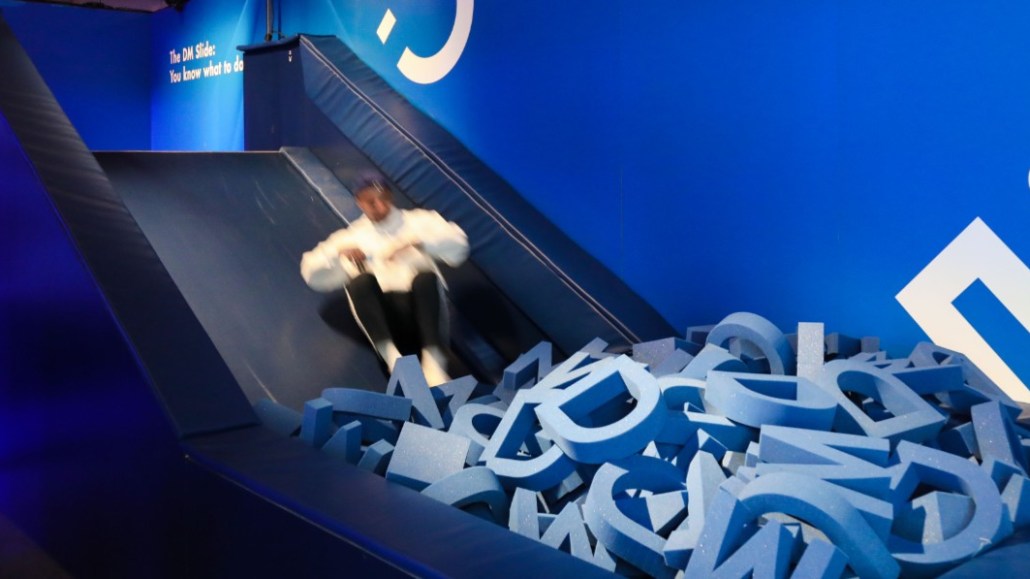 “People who were introduced to Visible as a brand [that way] were twice or three times more likely to convert,” said Ormes. “They would also open and engage with our emails or in conversation with the company for a full 90 days after they had the first experience. Because our consideration cycle is so long, it’s super important.”

Typically, a person considering changing phone carriers can take months to mull that decision over while researching the company. That said, roughly 60 million people switch phone carriers each year, per the company’s research, and Visible is looking to tap into that market. By using experiential marketing efforts, including pop-ups and activations at festivals like SXSW, Visible is increasing the likelihood that a person may switch to Visible, according to Ormes.

While experiential marketing represents a small portion of Visible’s marketing budget — it’s part of the 10% that it allocates for relationship-building activities — the company said that a large driver behind its pop-ups and activations is that it doesn’t own any physical storefronts. The other 90% of the budget is allocated to digital media, mostly toward social and video.

For its most recent experiential effort, Visible created an interactive tour of the mobile experience in real life in Denver called #Phonetopia that included a DM slide (where you landed in foam letters of D and M) and a GIF shop. Earlier this year, the company held other pop-ups in Los Angeles, Austin and Denver.

The point of the experiential marketing push is to “make people feel like there’s a human being behind the brand,” said Orme, even if consumers aren’t able to connect with the brand in person in a physical store. The company is hoping that its focus on building relationships with its consumers through events will help it stand out in the category, which can often be focused on transactions and specific deal promotions in marketing. As previously reported by Digiday, the company has been watching direct-to-consumer brands like Glossier and Casper with the aim of being a lifestyle brand to build out a deeper relationship with its customers.

“We’ve tried to build a tactile, physical experience in which someone can meet our brand that’s tangible, emotional and fun so that ultimately they will give us a chance in considering us in their wireless choices and actually switching,” said Orme. “We’re trying to change the dynamic from being purely transactional, and we believe we can be more than just dollar signs. We’re building relationships and serving as an extension of their [customers’] communities.”

That the company is looking to foster that connection with consumers with in-person experiences makes sense to brand consultant and co-founder of Metaforce Allen Adamson. “You can spend a lot of money online and still be invisible,” said Adamson. “The benefit of mixing a little bit of real experiences in with digital advertising is that they can serve as a catalyst to get people to pay attention to you.”

While the company doesn’t have a permanent physical brick-and-mortar presence that could serve as the in-person experience of the brand rather than pop-ups, Adamson doesn’t see that as necessary as “most people don’t care about the stores,” said Adamson. “If you can get [a network] for less, a lot of people will switch.”