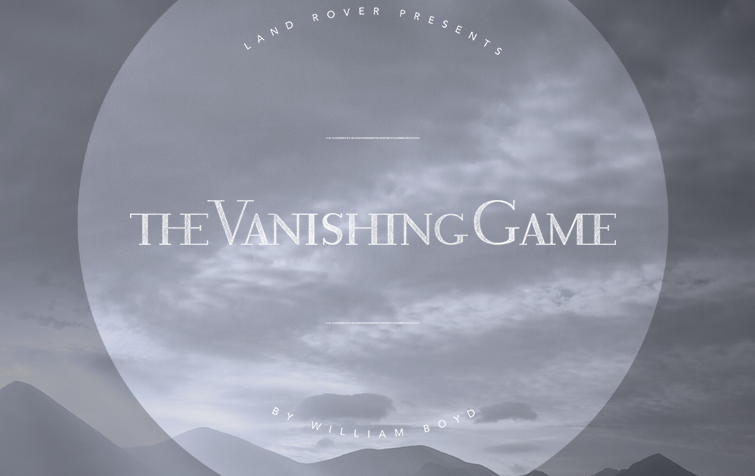 Land Rover’s getting into the publishing business.

The automaker has launched “The Vanishing Game,” an interactive version of novelist William Boyd’s 17,000-word short fiction about Alec Dunbar, a washed-up actor who is sent off on a mysterious driving adventure across the U.K.

Boyd isn’t just any ordinary copywriter: his previous books include Booker Prize-nominee “An Ice-Cream War.” His new novella was commissioned by Y&R and is also available in print. Readers can access the story on the campaign’s Tumblr where they are also assailed with a multi-sensory experience including images, video, animation, sound, music and narration.

The actual copy contains clickable key words that launch video of Land Rovers in action. Click on “river,” for example, and you’re rewarded with footage of the car crossing a lonely waterway. Also embedded throughout the site, built by Tool, are bits of content by actual Land Rover owners on their own journeys, which were collected by the brand via a #WellStoried hashtag it launched a few months ago.

The author-brand pairing is an unusual, but not unprecedented: In 2001 Bulgari commissioned Fay Weldon to write “The Bulgari Connection.” In this case, Land Rover told Boyd he could write whatever he wanted, provided one of their vehicles appeared in the story.

“We were not aware of any other brands who had worked with an author when we conceived this project,” said Y&R New York ecd Marc Sobier. “We gave him free reign to tell the story he wanted and feature any Land Rover vehicle he wanted. This makes it more of a true commission, rather than product placement or sponsorship. If an artist’s freedom is respected, I think these types of projects would be more appealing to them.”

For his part, Boyd appears pleased with how the sponsorship played out. “One of the collateral pleasures of writing ‘The Vanishing Game’ was that it made me realize how prominently Land Rover has featured in my life—in Africa and Britain—to an almost mythic degree,” he said in a statement.

“I remember as a boy being driven in a Land Rover through tropical rain forest to the Volta River in Ghana to fish for freshwater barracuda. And, as an even younger boy, climbing into my Uncle Ronnie’s Land Rover, the Scottish day dawning, as we went out to feed the sheep on his farm. A Land Rover is part of the mental geography of almost every British person, I believe. Consequently, to be asked to write a story in which a Land Rover features was immensely appealing, almost an act of homage.”

The book is also available in e-book form on iBooks, Kindle and Fire tablets. Boyd himself will take part in a Reddit AMA on Nov. 23 at 11 a.m. to promote the book and discuss his involvement. The campaign includes display ads and a paid posts on Vox, Quartz and NYTimes.com that will go live this week as well as a curated Spotify playlist of the music featured throughout.

“Land Rover is has long been a symbol and means of adventure,” said Sobier. “To incite a spirit of adventure in people and create an aspirational relationship with the brand, we developed original content that was designed to be experienced and very shareable in the social space.”