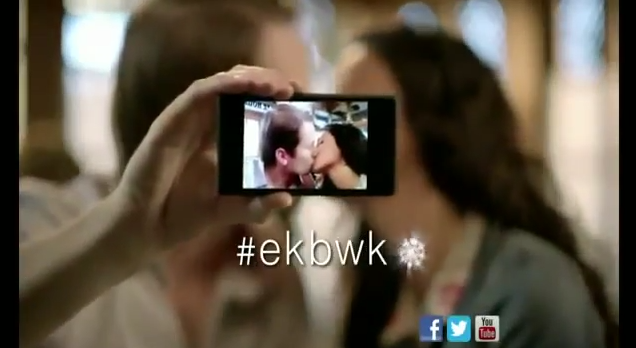 Silly, silly Kay Jewelers. Doesn’t it know that creating a branded hashtag, especially one that isn’t even a word or phrase, is just asking to be hijacked?

The jewelry brand has been airing a Valentine’s Day  TV spot featuring a man sitting across the table from his girlfriend. She is so engrossed in her phone — i.e., not him — that he actually has to text her in order to get her attention. So he can give her a diamond necklace. How sweet, we guess. As the spot concludes, a hashtag appears on the screen: #ekbwk, which is meant to stand for the brand’s slogan, “Every kiss begins with Kay.”

Well, of course, the Internet wasn’t going to let this hashtag just go along its merry way without messing with it. Here are some of our favorite abuses of the #ekbwk hashtag. Happy Valentine’s Day, everyone!

If I had to text my wife to get her to look up from her phone at dinner on Valentines Day, guess who’s not getting that jewelry? #ekbwk

Every kiss begins with kush #ekbwk

That bitch doesn’t deserve a gift she can’t even get her face outta her phone #commercials #ekbwk #kay #justsaying — Shannon Kilduff (@XoShannnonnnxo) February 14, 2014

#ekbwk when you’ve given up on life

Some marketing genius at Kay Jewelers thought #ekbwk was a good idea. #facepalm

#ekbwk How many times is it ok for my Uncle to gently kiss my neck?

#EKBWK then she gets pregnant, then you spend all your $ on kid, then you get divorced, then you’re in a home, then you die. Thanks Kay

Ppl that have to get a text to look up from their phone from their valentine deserve the cliché charm bracelet they got. #ekbwk

Yeah, every kiss begins with Kay, but in my case my Christmas present failed with Kay. Ordered, paid, but still haven’t received. #ekbwk

The new KAY commercial is probably the funniest thing I’ve ever seen. It also has a terrible hashtag #ekbwk https://t.co/aArKg2WTJy

Nothing ever changes, things won’t get better, and everyone will leave you. #ekbwk