Kanye vs. Kim: Who wins at digital retail? 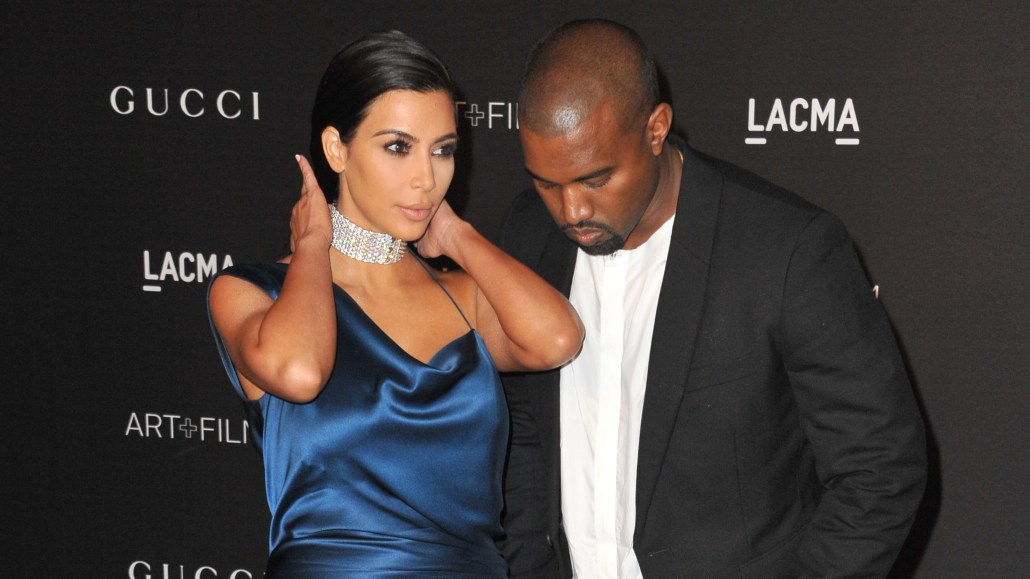 We’re not in the habit of pitting married couples against one another at Digiday, especially not this close to Valentine’s Day. But, with Kanye West’s new Adidas shoe set to be unveiled at 4 p.m. today, the comparisons between West and his marketing-wizard wife, Kim Kardashian, are too irresistible. Below, we run down the retail and marketing chops of each half of this duo.

Kanye: It’s too early to know how well the Adidas shoe will do — but it’s safe to say that considering West’s record with sneakers, it’s going to be a hit. His two collaborations with Nike reached a re-sale value of $90,000 at one point. The Yeezy 750 Boost will be released to the public Saturday, with a presentation featuring artist Vanessa Beecroft streaming live during New York Fashion Week.

Priced at $350, with only 9,000 pairs to be made available, the sneaks have been enjoying a robust digital-hype campaign with a mysterious countdown website and a new app that lets sneakerheads reserve the shoes. The presentation will also be repeated live 10 times around the world — from South Africa to London. “Yeezy” has been mentioned over 3,000 times in the last nine hours on Twitter.

Kim: The Kardashian Kollection line of pumps and boots is decidedly lower-end, with the average price hovering around $25.

Kim: “Kim Kardashian: Hollywood,” the mobile game where players navigate the vagaries of celebrity life, was an enormous success: It generated $74.3 million in revenue and was downloaded 28.4 million times by the end of 2014. Game maker Glu Mobile doubled its revenues last year.

Kanye: Yeezus has game, but not a game.

Fashion/Beauty
Kim: The Kardashians have their name on multiple clothing imprints: the Dash stores, the Kardashian Beauty line, and Kardashian-branded tanning products and bronzers. Kardashian’s fifth Kollection with Lipsy broke the retailer’s online sales record last year. Reports peg retail earnings in 2013 at $600 million — while the family’s empire, including the Jenner sisters is estimated at $65 billion.

Kanye: West loves fashion. He’s tried his own hand in the clothing business multiple times, including a collaboration with French retailer APC, a capsule collection of basics that sold out. But his ambitions are higher. West has said that his race and his celebrity put him at a disadvantage in the world of fashion — he doesn’t just want to be a celebrity designer, he wants to be a designer, period. But Kanye’s collaboration with French designer Jean Touitou struck a sour note last month when Kanye granted the retailer permission to name a line of clothing after one of his songs — which happened to contain the N-word.