Pass the tissues, the John Lewis Christmas ad has landed. The TV spot, “Man on the Moon” follows a young girl who spies through her telescope a old man living in a shack on the moon. Determinedly trying to communicate with him, she eventually gets to send the old man a Christmas present. A tear is shed.

By midday U.K. time the Adam and Eve DDB-created ad nearly outperformed last year’s ad, having been mentioned 105,000 times across platforms including Facebook, Twitter, Instagram and YouTube. Last year mentions of “Monty the Penguin” hit only 140,000 in the first 24 hours. The spot also has already spawned its share of parodies, too.

Most of the responses to the ad were positive, with 34 percent of the mentions saying it made them cry, and 23 percent of people praising it, according to social data analytics firm Crimson Hexagon. Raising awareness for its tie up with Age U.K. also seems to be working, with 11 percent of mentions referencing the partnership. 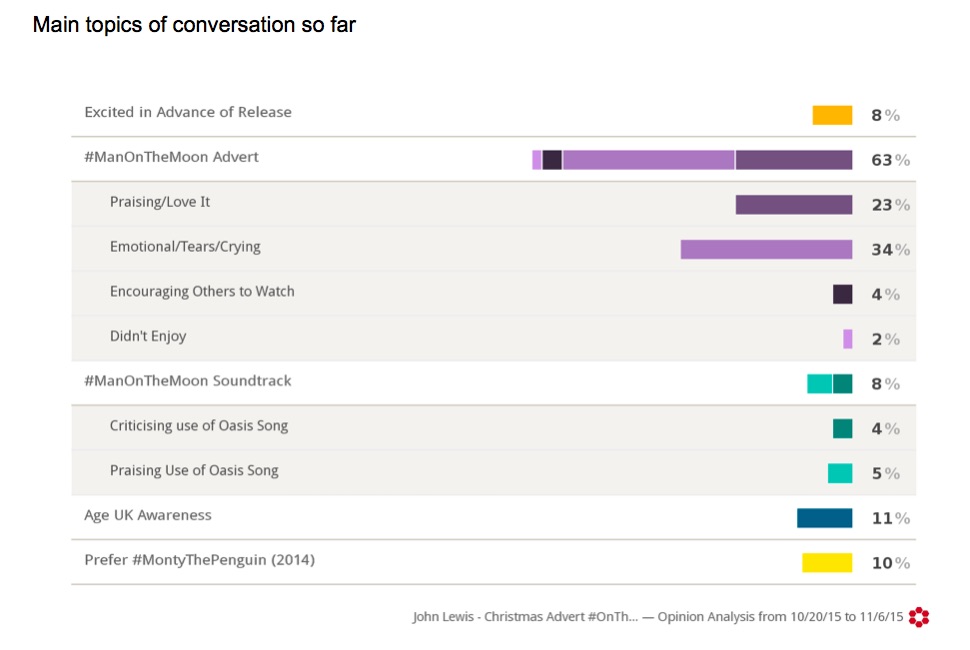 Jon White, managing director at brand consultancy Elmwood, said the partnership with Age UK will also be benefiting the retailer, who might be finding that social media buzz and distribution is no longer enough to resonate with the audience.

Since as early as 2007 the launch of the John Lewis Christmas TV ad has followed a familiar pattern; a tear-jerking story, a solid social media reaction, and an obscene amount of subsequent sales.

The department store has spent £7 million ($10.6 million) on the campaign. It’s the same as the previous year’s Christmas ad “Monty the Penguin,” which was the country’s most-popular ad racking up 22 million YouTube views by January. This year’s TV ad cost £1 million ($1.5 million) in media spending, with the rest went on distribution, merchandise, and an augmented reality app which lets people scan the merchandise to reveal a new fact about the moon each day until Christmas.

Peter Veash, CEO at digital shop The Bio Agency, said in an emailed statement that this is a big step for John Lewis’ digital transformation and will help have more of an impact on its bottom line and help move people into its stores. “Using technology to engage consumers in-store and online will help in closing that gap,” he said.

John Lewis is donating profits from its merchandise sales to the charity, and will continue to work with it in the run up to Christmas hosting events, a move which will help to keep the momentum going.

“There is a new appetite for numerous touch points that create real involvement for the target audience beyond a passive view,” said White. “It’s a perfect storm of real experience, which in turn creates social engagement, and ultimately leads to brand affinity.”

John Lewis has carved out enough options for sales of merchandise to try and capitalize on how its social media interactions can lead to affinity, but it still has some momentum to build if the response on social is anything to go by, according to Crimson Hexagon, there were virtually zero mentions that included any propensity to buy.