Inside R/GA’s Drive to Play the Startup Game 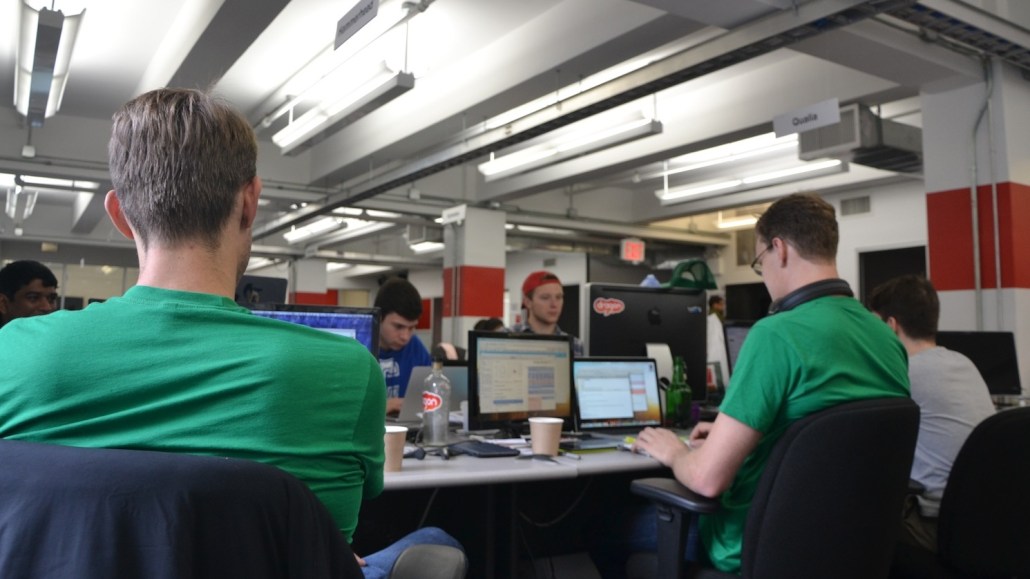 The two scheduled a meeting with Ivan Kayser, their mentor at R/GA’s connected device accelerator, because they couldn’t settle on how to best represent their device to new parents. Owlet’s Internet-enabled baby bootie, in development since 2012, goes beyond merely recording babies’ sighs and screams. It measures oxygen level in the nursery, heart rate, skin temperature, sleep quality and sleep position — and then sends that information to a parent’s smartphone.

Workman and Bunn were worried that might be too much. Parents probably don’t want to be overwhelmed with data when they wake up in the middle of the night; they simply want to know if their baby needs tending to, they thought. Kayser, a partner at design firm Siberia, was there to help.

The meeting illustrates what R/GA thinks it can accomplish with its new accelerator. Launched on Dec. 2 in conjunction with startup accelerator Techstars, R/GA is providing office space, mentoring and venture capital to 10 startups, most of which have nothing to do with digital media. The idea is that R/GA, the agency best known for helping Nike create Nike Plus and Nike Fuelband, can help startups figure out their approaches in the rapidly evolving world of connected devices. In return, R/GA hopes to reap the rewards of early-stage venture capital investing.

The world may not be in dire need another accelerator — and some may argue that existing accelerators may be far better suited to the startup game than an ad agency. But R/GA thinks it can compete by infusing its accelerator with a combination of tech acumen and an agency ethos that know how to build lasting brands.

“What differentiates this program is that startups are often focused on getting their one prototype going,” Stephen Plumlee, R/GA’s chief operating officer said. “We’re telling them to think about their companies as brands that have a connection to consumers.”

But the accelerator marks a more permanent move into the burgeoning “Internet of things” industry. R/GA moved an entire floor’s worth of employees to make room for the accelerator. This fall, it also created R/GA Ventures, a separate entity co-owned by R/GA and its holding company IPG, to oversee any investments it makes in the 10 accelerator companies.

There are other agencies getting into the accelerator game, too. Huge’s startup program Huge Labs recently spun out two companies: event marketing platform Togather and Honey, an internal social network for corporations. But unlike R/GA’s accelerator, which brings in young startups, ideas for Huge Labs companies are developed within the agency.

All companies in the R/GA program initially receive $20,000 from R/GA and, upon completion of the program, have the option of taking $100,000 in convertible debt from R/GA in exchange for equity. Techstars takes 6 percent equity in all of the startups involved.

This puts R/GA in unfamiliar territory, though. R/GA is no longer only competing with other ad agencies for talent; it’s going up against VC firms and accelerators in Silicon Alley and Valley. Partnering with Techstars — whose portfolio is currently worth more than $441 million — certainly makes the accelerator more appealing to entrepreneurs, but R/GA’s sterling reputation in the ad world doesn’t necessarily extend to startup land.

“I knew about Techstars pretty well. I didn’t know about about R/GA,” said Gabe Blanchet, CEO of Grove, which makes a device that allows urban farmers to remotely monitor and control their greenhouses. Still, it was R/GA’s involvement that ultimately tipped the scales for Blanchet, leading to his decision to join, he told Digiday.

“We knew that we had a very strong technical team coming out of MIT,” he added. “But we were sort of lacking on the marketing and branding side, so that’s why this accelerator in particular was very interesting.”

R/GA sees the opportunity to pair that kind of branding knowledge — it has big-brand clients like Nike, L’Oreal and MasterCard —  with its product expertise, honed through the development of products like Fuelband. As a consequence, many of the startups in the accelerator have nothing to do with media or advertising. There’s Enertiv, which makes an Internet-connected breaker box that provides data on electricity consumption, and Keen Home, which creates smart air vents that allow homeowners to shut off the heat in unoccupied rooms.

The mentoring will culminate on March 8 when each startup presents its product at South by Southwest Interactive in Austin, Tex. A second presentation will be held on Demo Day — the accelerator’s equivalent of graduation day — on March 18 back in New York.

Agency accelerators are able to afford young companies perhaps the most valuable resource of all: Access to potential clients. More than 15 of R/GA’s current clients — including Beats by Dre, E-Trade and Samsung — are mentoring companies in the accelerator, Plumlee said.

“The main advantages of working with an agency are access to clients and insight from clients,” Aaron Shapiro, CEO of digital agency Huge, said. “We have tremendous insight into real-world problems and what clients really need.”

As for Owlet, the company hasn’t decided on how it will redesign its baby-monitoring device just yet, but the mentoring session has made it a priority for the company.

“We really didn’t think about user experience hardly at all before the program,” Workman said.