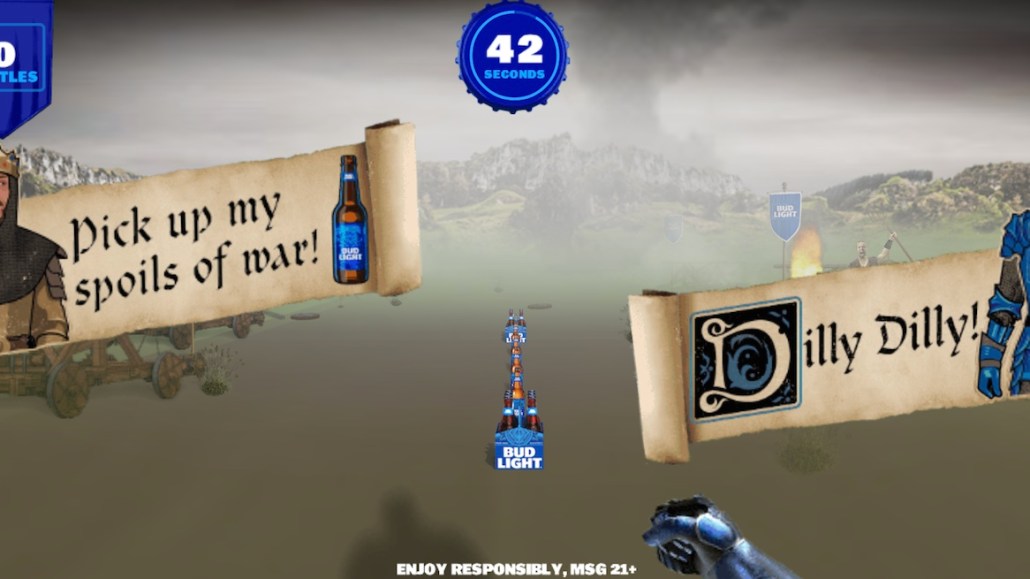 Bud Light is hoping Snap will be the right accompaniment for its two television ads on Super Bowl Sunday.

The brand plans to run three types of Snap Ads, including a Snapchat game and two different types of Snapchat filters. The work is part of Bud Light’s largest Snapchat campaign ever.

Most of the Snap Ads preview one of Bud Light’s trilogy of “Dilly Dilly” spots, including the new spot that will air on Super Bowl Sunday. Users can swipe up in these ads to watch the full commercial.

One of these Snap Ads is a 45-second interactive game called “The Battle of Beer Run,” in which a knight runs through a battle to collect Bud Lights for his townspeople. Bud Light began running the game on Snapchat roughly two weeks before Super Bowl Sunday. As with the other Snap Ads, a user can swipe up into a “Dilly Dilly” commercial when they are done playing the game.

“We chose Snapchat, as it is the right platform for millennial consumers,” said Margot Weiss, senior digital brand manager at Bud Light. “Our core target consumer for Bud Light is 21- to 24-year-old men and women who want to engage with brands through their mobile phone.”

But Snapchat might seem like an odd choice for a beer brand aiming to reach an audience of drinkers.

Alcohol brands, including Heineken and Sailor Jerry, have told Digiday that they have been hesitant to spend on Snapchat because of concerns about the platform’s ability to verify that ads are only served to people 21 and older. The platform won’t reveal the percentage of its users that are 21 or older, but the largest demographic on the platform is users between 18 and 24, which makes up 36 percent of the overall audience.

For Super Bowl last year, Bud Light launched a Snapchat game that got an average watch time of 108 seconds, and users spent 4,700 hours playing the game, according to the company. In 2017, Snapchat said it saw an increase in brands running branded games, which average over a minute of engagement time.

Anheuser-Busch is also running Snapchat Super Bowl activations for its other brands, including a Snapchat Lens for Budweiser and filter for Michelob Ultra.