After all this time, what’s a little more waiting when it comes to owning an Oculus Rift? Moments after the virtual reality headset went on sale this morning, the website crashed dampening excitement over the $599 device.

The Facebook-owned company says it will begin shipping in April and the hefty price tag doesn’t include taxes or free shipping. Early adopters will get an Xbox One Controller, a copy of the video game Eve: Valkyrie and the more family friendly “mind blowing” game Lucky’s Tale.

So far, the launch is off to a rocky start.

After the countdown clock ticked toward 11 a.m. ET, Oculus’ homepage pointed people toward the checkout page that displayed a blank screen for many, who tweeted their annoyance toward Oculus founder Palmer Luckey: 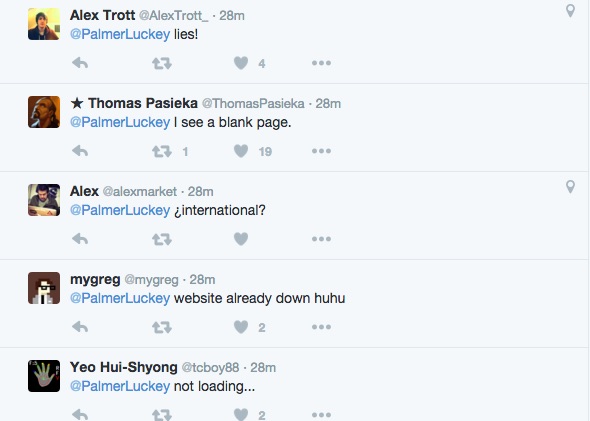 Luckey tweeted that Oculus is “experiencing insanely high load,” adding that “Credit card processing is trying to stay [live] under load from mass script kiddie fraud attempts.” He promised that there was “no chance” of the Rift selling out.

The page is back online, though it’s loading slowly. Those who have been able to get on haven’t been thrilled with the $599 price tag, a touch higher than the rumored $350 to $450 price that had been floating around:

$600 for the Oculus Rift lol they can keep it

An Oculus Rift VR headset can transport you to unbelievable fictional worlds, like a world were people will spend $599 on an Oculus Rift — CEO Kaz Hirai (@KazHiraiCEO) January 6, 2016

I CALLED IT! $599 OCULUS RIFT. (I am very sad to be right, because that’s too rich for my blood right now)

Well, perhaps the $99 Samsung Gear VR might be of interest to them.